ED questioning Sonia has pushed Congress out of its comfort zone

In the past one month, Delhi streets have seen more Congress leaders than ever before 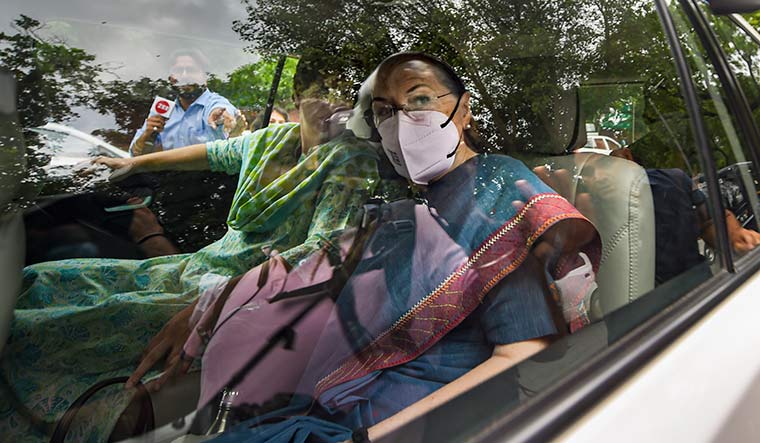 Sticking to her guns: Sonia Gandhi arrives at the ED office with daughter, Priyanka, on July 26 | PTI

Sonia Gandhi was not offered any food, not even tea, while being interrogated in the National Herald case. The Enforcement Directorate was told that it was against the interim Congress president’s security protocol, and the agency did not want to take any chances.

So there sat Sonia, 75 and recovering from Covid-19, in a small ventilated room with a typist and the interrogating officer. The ED had summoned her in the money laundering case a while back, but Sonia first reached the agency’s office on July 21. The interrogation continued on July 26 and 27.

The agency followed all the protocols—Covid tests were done, a government doctor and an ambulance were kept on standby, and Priyanka Gandhi Vadra was allowed to wait on her mother, with a medicine kit, in another room. Priyanka was also allowed to meet Sonia in between and took her home for lunch. This was in contrast to what the ED had done during Rahul Gandhi’s questioning in the same case in June. It had stopped Priyanka at the gate then.

On day one, Sonia answered 28 questions; on July 26, she answered 50, and was determined to do so with clarity and conviction.

The big question haunting the Congress top brass at its Udaipur Chintan Shivir in May seemed to have followed the Gandhis to Delhi. The question being, how did the party lose its connection with the common man and what has it done to revive it? Ironically, the ED seemed to have hit upon the same question, albeit in a different way.

The alleged money laundering took place during the “revival” of Associated Journals Limited (AJL), the publisher of the English newspaper National Herald, which Jawaharlal Nehru had launched to be the voice of the “common man”.

Sonia is learnt to have told the ED that the Congress had given a Rs90-crore, interest-free loan to AJL to nurse the ailing newspaper back to health. However, investigators said that when AJL failed to repay the loan, the All India Congress Committee, the party’s apex body, executed a formal deed on December 28, 2010, assigning the entire loan amount to Young Indian, a company set up in November 2010 that had Sonia and Rahul as its majority shareholders. Investigators said that Young Indian, with a share capital of Rs5 lakh, did not have deep enough pockets to buy the loan, and that is where the role of the alleged Kolkata-based shell companies came into play.

The ED has rejected the AJL revival story; it feels that the huge amount of money was meant to revive the fortunes of the Gandhis and not the newspaper, which is not seen on the streets today. 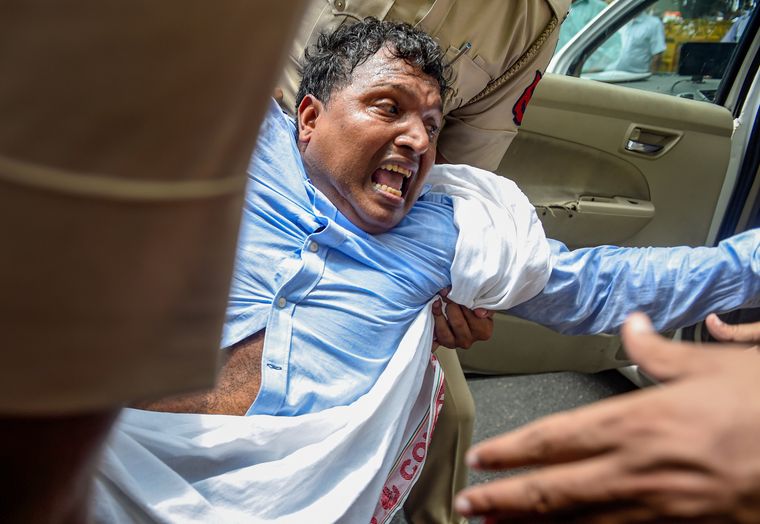 A video of Youth Congress president Srinivas B.V. being pulled by the hair went viral on social media | PTI

The disconnect, said the ED, happened when most of the prime properties AJL had acquired—by sale or lease from Central and state governments to publish the newspaper—started acting as golden gooses in the real estate market to earn income for the company.

The ED claimed Sonia and Rahul took over commercial properties worth around Rs800 crore belonging to AJL, allegedly using fraudulent means, to accrue illegal benefits of Rs414.40 crore in the form of several immovable properties. Both Sonia and Rahul have denied all charges.

The Gandhis maintained that Young Indian was created under Section 25 of the Companies Act as a not-for-profit company and no dividend could be given to its shareholders or directors.

Sonia was polite yet firm when repeatedly asked to explain why the actions to revive AJL should not be linked to any financial gains enjoyed by the majority shareholders of Young Indian. “At times, she claimed to have forgotten the minute details of the transfer of shares but stuck to the argument that the aim was to revive AJL,” said an investigator.

Under criminal law, the onus of proving an offence is on the prosecution and not the accused. The ED team had come prepared with material evidence and had transaction details, annual income tax returns reports and documentation of AICC’s transfer of the entire loan amount of AJL to Young Indian for only Rs50 lakh. The company had allotted more than nine crore shares to Young Indian in lieu of the loan, said an investigator familiar with the questioning. Subsequently, the authorised capital of AJL was raised from Rs1 crore to Rs10 crore, and 99 per cent of AJL’s shares were transferred to Young Indian. The investigators alleged that the transfer of shares led to financial gains for the Gandhis. 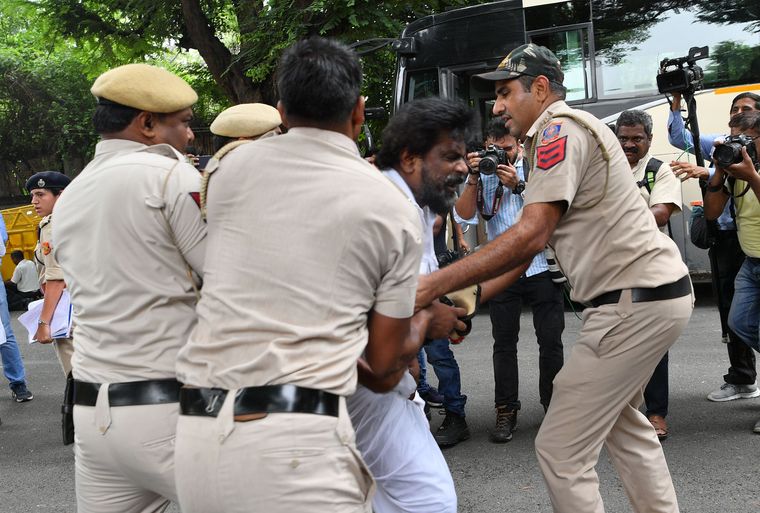 Sonia, however, stuck to her guns. She is learnt to have told the ED that AJL was incurring huge financial losses. The publication of the newspaper had to be stalled on many occasions and finally got suspended on April 2, 2008. All employees took voluntary retirement.

At the time, Congress leaders Motilal Vora and Oscar Fernandes were managing director and director of the company that had properties in Delhi, Patna, Lucknow, Panchkula (Haryana) and Bandra (Mumbai).

The ED wanted to know, even if Vora handled the AJL-Young Indian business, were the Gandhis not aware of the finer points of the transfer of shares to them? Both Sonia and Rahul have decried attempts to attribute criminal motives to the transfer. Vora’s son, Arun, a party MLA in Chhattisgarh, had also taken objection to his late father’s name coming up in the case.

Whether it is before the ED or the court, the Gandhis seem to have a long road ahead. The reason—it is not only the ED that is scrutinising the Gandhis. The predicate offence, which allows the ED to carry out a money laundering investigation, is in the Delhi Metropolitan Magistrate’s Court order of 2014. In it, the court took cognisance of offences under sections 403, 406, 420 and 120B of the Indian Penal Code (IPC), relating to Young Indian’s takeover of AJL properties. The Gandhis’ appeal against the magistrate’s judgment was dismissed by the Delhi High Court and also the Supreme Court.

ED officials claimed that the offences under section 420 and 120B fall into the category of “scheduled offence under the PMLA (Prevention of Money Laundering Act)”.

“Since Young Indian has taken over properties worth more than Rs800 crore as sequel to these offences, accordingly, the amount of 0800 crore is being treated as ‘proceeds of crime’ under the PMLA,” a sleuth said.

For the ED, the National Herald case is a fitting example of how properties acquired at a minimal price have been put out for commercial use to earn rent. The agency has dismissed the argument that Young Indian would use the financial gains, if any, for charitable activities; it cited a lack of records of any charitable work the company had done since 2010.

A shot in the arm of the ED probe is the order of the Income Tax Appellate Tribunal this March, which spoke of a “corporate veil” used in this case to hide the proceeds of crime.

Following the ED’s questioning, the next big challenge for the Gandhis would be to come clean before the courts. Politically, the Congress does not have much time to waste—it has to fight elections in Gujarat and Himachal Pradesh later this year, and nine states, including its own strongholds of Chhattisgarh and Rajasthan, next year.

On July 27, Rajasthan Chief Minister Ashok Gehlot said the ED was being used to collapse governments. “They called Rahul Gandhi for five days,” he said. “Now they have called Sonia Gandhi for the third time. The ED has created terror in the country. The Supreme Court should decide quickly on the matter.”

As Sonia’s questioning took place, Rahul and other MPs assembled in Parliament and marched to Rashtrapati Bhavan to draw the attention of the newly appointed president, Droupadi Murmu, towards the government’s alleged misuse of Central agencies. The Delhi Police detained him, but let him go later in the day.

In the past one month, the streets of Delhi have seen more Congress leaders than ever before. Clearly, Sonia’s deposition before the ED seems to have pushed the party out of its comfort zone and on to the streets. Also, several opposition parties have rallied around Sonia by issuing a joint statement as a show of strength against a government that it claims has unleashed “A relentless vendetta against political opponents through the mischievous misuse of investigative agencies”.

What remains to be seen is whether, in a dynamic political arena, the Congress has the mettle to fight the long battle ahead.