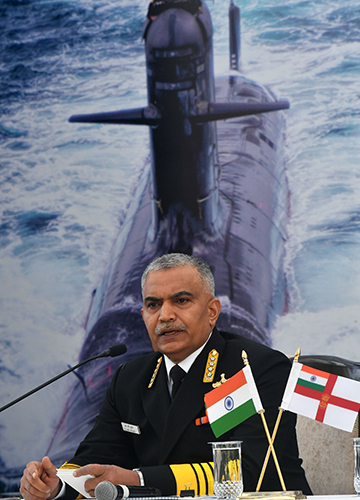 THOUGH THE PROTESTS against Agnipath have subsided, the debate continues—not only among veterans and aspirants, but also among serving personnel. The concerns are mostly about Agniveers being without jobs after serving four years. There is also a fear that the scheme may bring an end to the century-old regimental ethos that made the Indian military one of the world's finest fighting machines. However, the military leadership has welcomed the scheme. Among the chiefs, Admiral R. Hari Kumar has been the most vocal, calling it “transformational”. Excerpts from an interview:

You called Agnipath transformational. Could you explain how it can transform the armed forces?

There are four reasons. First, the scheme will reduce the average age of our services by about four to five years. This youthful profile, in itself, is a transformative change that we have been seeking for a considerable time, especially following the Kargil Review Committee recommendations. Second, Agnipath will enhance our combat readiness and operational effectiveness by tapping into our technologically savvy youth. The infusion of a greater number of Agniveers each year will give us an edge in rapidly evolving and technologically intense conflicts. Third, this scheme will lead to an optimal mix of a youthful cadre and experience. The permanent cadre would consist of experienced personnel enrolled after four years of service. The youthful cadre, serving for four years, will form the rank and file. Fourth, with a steady stream of trained, disciplined, skilled and motivated Agniveers joining the national workforce, the scheme will play a vital role in the growth, prosperity and transformation of our nation.

The concern is about the 75 per cent who have to leave after four years. They would get preference in the paramilitary and police. But, the annual intake of these forces is not more than a few thousand personnel. Moreover, their training and operational philosophy are different from that of the armed forces.

There will of course be differences in terms of training and operational philosophy, but the commonalities will outweigh these. Let me elaborate. The efficiency of the paramilitary forces is dependent on the strength of their trained personnel. With an outflow of about 46,000 Agniveers per year, our paramilitary forces will be able to tap into this vast potential to strengthen their force levels with well-trained, weapon proficient and self-disciplined personnel in the prime of their youth, exposed to a plethora of disciplines, including operational deployments, disaster relief operations, rescue missions and administrative functions. Agniveers would only need a bridging course to fit into the paramilitary forces.

Serving in the military has been considered a prestige and honour in villages. Added to that is the attraction of pension, widow pension, the enhanced value in the so-called marriage market, medical facilities and liquor quota, etc, which an ex-solider gets. The Agniveer would not get any of these. Wouldn't he been seen as one who has lost his job.

No. On the contrary, it would further enhance the status of Agniveers in our society. Firstly, serving the nation's military with a commitment to apply ordered application of force under an unlimited liability is an honour for any citizen. It is this unlimited liability that sets the military profession apart from all others. In India, a soldier, whether he has served for four years or 40, will always retain the honour and dignity accorded by an evolved and mature society.

But he has no job after four years....

During their tenure in the services, Agniveers will gain both tangible and intangible benefits, qualities and skills. On the tangible front, they will transform into experienced, capable, well-trained, highly skilled individuals who understand the dignity of labour. On the intangible front, they will gain immensely from some of the best leadership practices and management skills. Additionally, on completion of four years, they will be provided various levels of certification and credit points to enable further education. On exiting after four years, they will be ready to be absorbed in defence PSUs, the corporate world, government organisations and security agencies such as the CAPFs. Further, on completion of the engagement period of four years, Agniveers will be paid a one-time, tax free Seva Nidhi package of Rs11.71 lakh.

There is also the issue of regimental culture. The soldier, it is said, fights for his buddy, the honour of his company, his regiment and so on. How can we expect a youth of 18 to 23 get these regimental values ingrained in his mind, only to forget all these after four years?

The issue of regimental culture relates to what is termed as social cohesion in managerial practices. In the armed forces, in addition to the social cohesion, we also seek task cohesion, which puts mission accomplishment as the primary source of motivation. In the Navy, we have been structured in such a manner that an officer or a sailor remains part of one team for about two to three years, sometimes even less, and then moves on to join another team.

How is the cohesion achieved in such circumstances?

In each of our units we have a smaller cohesive unit called a division—usually about 11 personnel. The division is a group of junior sailors, senior sailors and a divisional officer who have a common professional task at hand. Task accomplishment drives their interactions leading to task cohesion. Working together leads to personal bonds or social cohesion. The team composition keeps changing, but the spirit of togetherness, in matters both personal and professional, endures. This would further ingrain teamwork and camaraderie in each Agniveer.

One of the main purposes of this scheme is to cut the pension bill. But as CDS, General Bipin Rawat had mooted the idea of raising the retirement age of soldiers from 55 to 58. Was that proposal considered?

As was briefed by the defence minister during the launch of Agnipath, there is no financial imperative or consideration attached to the scheme. The honourable minister had specifically mentioned that the government does not view the armed forces and the security of the nation from the financial perspective.

The scheme has been launched to infuse a more youthful profile for the armed forces on the basis of recommendations of various committees such as the Kargil Review Committee. Raising the length of service was a different proposal and is not linked to the Agnipath scheme.

There was little discussion in Parliament committee or think-tanks before the scheme was announced. Wouldn't such debate, as we had in the case of CDS and theatre commands, have helped smoothen the rough edges of the scheme?

Let me assure you that there were extensive discussions, debates and deliberations within the armed forces right down to the field level, the ministry of defence and all stakeholder ministries, departments and agencies of government. It is only after such rigour over the last two years that the government has approved the scheme with the full concurrence of the armed forces.