How BJP has gained from Hardik Patel quitting Congress

Patidar leader could join AAP or BJP, but saffron party will gain in both cases 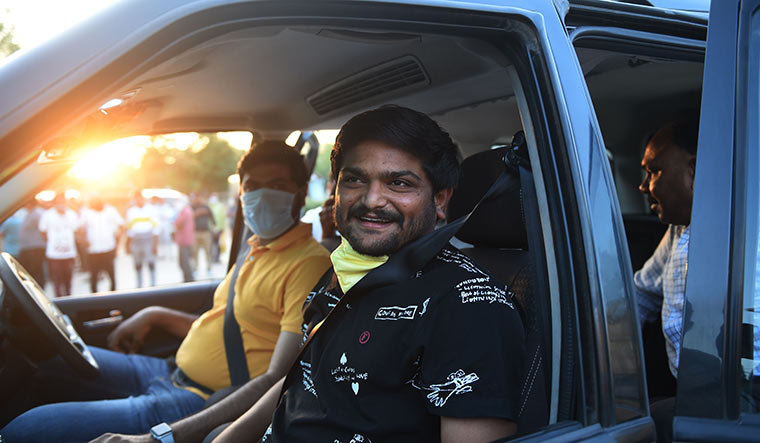 Free to lead: Hardik Patel says that resigning from the Congress would allow him to really work for the people | AFP

The Nav Sankalp Shivir focused on youth. So, it is ironic that Hardik Patel, who was the Congress’s working president in poll-bound Gujarat resigned just two days after it. At 28, he was the youngest working president the party had in any state. Patel had been sulking over the past few months because of “differences” with the state leadership. He had skipped the Congress meet saying that his schedule had been planned in advance.

The face of the 2015 Patidar agitation, Patel helped the Congress in 2017 as it won a respectable 77 seats in the assembly. He formally joined the party ahead of the 2019 Lok Sabha elections in the presence of then party president Rahul Gandhi. And he was given the second highest post in the Gujarat Congress, after president Jagdish Thakor, despite having been with the party for only about three years.

In 2022, the state is set to witness a three-cornered contest with the entry of the Aam Aadmi Party. Whether Patel’s presence could have won more seats for the Congress is debatable. But, he was, undoubtedly, one of the few leaders in the party’s ranks who could draw crowds.

The Gujarat Congress’s chief spokesperson, Manish Doshi, played down Patel’s exit. He said that only time would tell whether it was a loss for the party and termed Patel putting up the resignation letter on social media “opportunism”. “He was given such a big post at a young age,” said Doshi. “There are thousands of workers who do not gets posts even after remaining with the party for years.”

However, leaders quitting the Congress in Gujarat is not new and the party’s inability to convince Patel to stay was no surprise. The party’s strength in the assembly has fallen to 63. Apart from the MLAs, hundreds of workers have also resigned.

In his resignation letter to party president Sonia Gandhi, Patel said that despite several attempts to steer the Congress in the right direction, the party has been working against the best interests of the people. He praised some of the Union government’s decisions such as the abrogation of Article 370. Patel also said that after resigning from the Congress, he would really be able to work for the people.

The Patidar leader now seems to have two political options—the BJP and the AAP. Both would benefit the BJP.

If he joins the saffron party, it does not have to worry about his potent verbal attacks during the campaign. However, there is all possibility that Patel may not get enough prominence as that would make the BJP’s other Patidar leaders unhappy. In the past, there have been instances of Congress turncoats being given tickets by the BJP, only to lose. Nonetheless, Patel could gain by joining the BJP, in terms of his legal battles, including a sedition case.

Patel joining the AAP would benefit the BJP as his followers would then vote for the AAP, thereby damaging the Congress. In this scenario, the BJP veterans would also be happy as they would not have to deal with Patel being in their party.