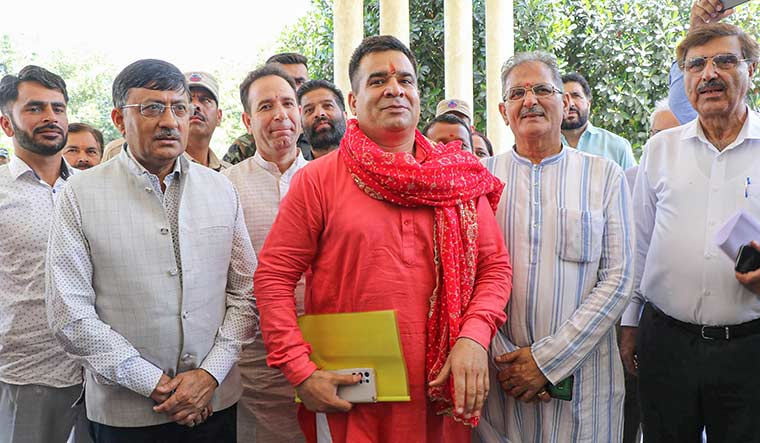 THE CONTROVERSIAL Delimitation Commission for Jammu and Kashmir submitted its final report on May 5, more than two years after it was appointed. Political parties in the Union territory are now anxiously awaiting the announcement of elections. J&K has been under Central rule since June 2018 and, after the reorganisation of the state of J&K into the Union territories of J&K and Ladakh in 2019, the BJP had linked the restoration of statehood to the completion of delimitation and elections.

The revision of electoral rolls would take three to four months. Once that process is complete, the Election Commission of India can announce elections by the end of 2022 or early 2023. However, there is a feeling among the opposition parties that the BJP might delay elections in J&K till the next Lok Sabha polls in 2024.

The opposition says that the BJP has not kept its promise to develop J&K at par with the most developed states of India. The Union government initiated several developmental projects and unveiled an ambitious new industrial policy to attract investment. Though the response was good, the progress has been slow; the pandemic also played spoilsport.

The BJP has taken steps to consolidate its support base in Jammu through a slew of offerings. It has provided reservations in jobs and education to economically weaker sections. The move has benefited those belonging to the upper castes in Jammu. The same has been done for people living near the international border in Jammu, mostly Hindus. Earlier, such benefits were available to only people living close to the Line of Control, mainly tribal Muslims.

The BJP has also strengthened its prospects among the West Pakistani refugees—Hindus and Sikhs who migrated from Pakistan after the partition. They gained citizenship and voting rights after the abrogation of Article 370. The Union government has also re-established 25,000 village defence groups—a civilian volunteer force against militancy—with volunteers getting a monthly salary of Rs4,000 to Rs4,500.

The biggest ‘gift’ to Jammu though is six additional seats in the assembly. Political analysts say the move will benefit the BJP immensely as the seats lie in Jammu, Samba, Kathua, Doda, Kishtwar and Rajouri, where the party is either strong or has improved chances of winning because of the way the boundaries of the constituencies have been realigned. For example, there were three assembly seats in the Reasi district (bordering Jammu, Rajouri and other districts) before delimitation—Gool Arnas, Gulabgarh and Reasi. Gool Arnas and Gulabgarh had a Muslim majority, while Reasi had a Hindu majority. Gool Arnas has now been merged with adjoining constituencies to create a new constituency—Shri Mata Vaishno Devi, a Hindu majority seat.

Similarly, in Chenab Valley, which includes Doda, Ramban (carved out of Doda) and Kishtwar districts, the number of seats increased from six to eight. According to Peoples Democratic Party leader Firdous Tak, five of the six seats had a Muslim majority; now, five of the eight will have a Hindu majority.

Both the major opposition parties in J&K, the PDP and the National Conference, see a communal bias in the delimitation. PDP leader and former chief minister Mehbooba Mufti said the Delimitation Commission had overlooked the basis of population and acted as per the BJP’s wish. She accused the commission of becoming an extension of the BJP’s agenda to lay foundations for demographic change. Farooq Abdullah, NC president and former chief minister, said that the entire exercise had been blind to the principles of electoral representation. The Congress, in a statement, accused the commission of neglecting the fundamental principles and norms of the exercise.

One of its notable recommendations was that two Kashmiri Pandits, including one woman, be nominated to the assembly with full voting rights. This is also expected to benefit the BJP. The commission also recommended nominating members from Pakistan-Occupied Jammu and Kashmir Refugees (POJKRs) to the assembly. The POJKRs comprise people who moved to Jammu from POJK because of communal riots in 1947. Under a relief and rehabilitation scheme by the Union government, each POJKR family was getting a one-time financial assistance of Rs5.5 lakh. This scheme’s deadline was extended from 2021 to 2026.

On May 8, thousands of POJKRs gathered at a rally to pressure the Centre into accepting the Delimitation Commission’s recommendation. The rally was organised by a forum headed by prominent RSS activist Romesh Sabbarwal.

The outcome of the delimitation could make the BJP a strong contender in the next elections. But, if the People’s Alliance for Gupkar Declaration (comprising PDP, NC and other parties), contests together, the BJP will find it tough to gain power. The Gupkar Alliance, which seeks restoration of Article 370, won half of the 220 district development council seats in 2020. The BJP won 75 and was the single largest party.

Despite the allegations of gerrymandering against the BJP, the regional parties and the Congress are keen to take part in the elections so that the democratic process can be revived in the restive border province.