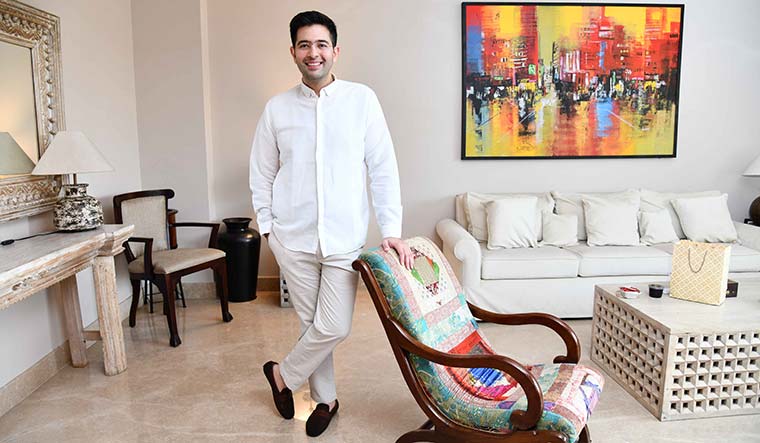 IT WAS THE FAG END of the India Against Corruption movement led by social activist Anna Hazare. Raghav Chadha, who was 22 back then, had begun his practice as a chartered accountant. He sought an appointment with Arvind Kejriwal, the prime mover of the campaign. And the rest is history.

Like many young professionals who were drawn to the Anna Andolan, Chadha, too, was deeply influenced by it. Fresh from the UK after completing his master’s in finance from the London School of Economics, Chadha was looking to establish his practice as a CA, but he felt he could chip in with a few hours of voluntary work. What began as four hours of work in a week for the anti-corruption cause turned into a full-time commitment and an entry into politics when the Aam Aadmi Party was formed in November 2012.

Today, if the AAP is recognised as the fastest-growing political start-up, and its victory in Punjab has provided it with a perch outside the national capital, Chadha has had a crucial role to play in the journey.

He was recently elected to the Rajya Sabha unopposed, along with four other nominees of the AAP for five seats from Punjab that are falling vacant in April. From a political novice representing a fledgling AAP before the news cameras, Chadha has risen rapidly to become the youngest member of the 'house of elders', the Rajya- Sabha.

For Chadha, 33, being an achiever is somewhat of a habit. Just before he joined the Anna Andolan, he was one of the youngest to get a licence to practice as a CA. After being appointed national spokesperson of the AAP at the age of 22, he was appointed national treasurer at 26.

Chadha recalls sharing the stage at an event with former Congress treasurer, Motilal Vora, who was in his nineties, and the contrast between the two was too much for the media to ignore. “We are a young nation, but there is under-representation of youth in politics,” he says.

As a member of the national executive, he was part of the team that drafted the party's manifesto for the assembly elections in Delhi in 2013. Chadha was also adviser to Manish Sisodia, Delhi’s deputy chief minister. He assisted Sisodia in cleaning up the capital's budget by removing unnecessary expenditures. Chadha was in-charge of litigations at a time when Kejriwal fought a defamation case filed by former Union finance minister Arun Jaitley.

Chadha fought the Lok Sabha election in 2019 from South Delhi, and lost to BJP's Ramesh Bidhuri. However, he won the assembly elections the following year from Rajinder Nagar, where he grew up. He was appointed vice chairman of the Delhi Jal Board and headed the Vidhan Sabha's committee on communal harmony that grilled Facebook representatives about the Delhi communal riots of 2020.

Chadha describes the Punjab assignment as a big leap in his growth as a politician. “Kejriwal ji entrusted me with such a big responsibility. I was merely an implementor of ideas on the ground and took care of running the campaign. He was the chief strategist,” he says.

There has been some chatter about whether Chadha’s rapid climb has been due to his proximity to Kejriwal. “I am a student of the Kejriwal school of politics. He is my mentor, my ideal. For someone like me who comes from a non-political family to be able to get this kind of opportunity could have happened only in the AAP,” says Chadha.

His supporters say Chadha has earned the trust of Kejriwal through his meticulousness and penchant for perfection. For example, as head of the assembly panel probing the riots in Delhi, Chadha was particular that the live broadcast of the proceedings matched the quality of Congressional hearings in the US.

Chadha—an alumnus of Modern School (Barakhamba Road) and Delhi University—says that a career in politics was nowhere on the horizon when he was growing up. In school, he excelled in debating and took part in badminton tournaments. Each time he was asked what he wanted to be when he grew up, he would say he wanted to join the armed forces. “Ten years ago, had I told my parents that I wanted to join a mainstream party like the Congress or the BJP, I would have been scolded and perhaps even disinherited,” he quips.

Chadha's family background is quite apolitical. His father is a businessman, his mother a homemaker, and his sister a CA. Also part of the family is a 12-year-old Lhasa Apso named Crunchy.

Life for Chadha has changed phenomenally and there is a price to pay for it—sacrifices on the personal front. “I have lost contact with so many good friends from school and college. I love travelling, but in recent times I have travelled only for work. The last show I watched on TV was Peaky Blinders, which was two years ago,” he says.

Chadha, a familiar face on TV, was initially teased by his party colleagues for his chocolate boy looks before he became better known for his well-articulated arguments. However, it was in keeping with his image as a good-looking young achiever that he walked the ramp at the Lakme India Fashion Week as a showstopper for designer Pawan Sachdeva, who is his maternal uncle. Clips of Chadha, dressed in a black leather jacket and pants, with an orange belt and lining on the shoulders, went viral.

Meanwhile, for the most eligible bachelor in the AAP, there is pressure from parents, and boss, Kejriwal, to get hitched. Chadha hinted that wedding bells will soon be ringing, but did not reveal further details. “All I will say is that it will happen soon,” he says.