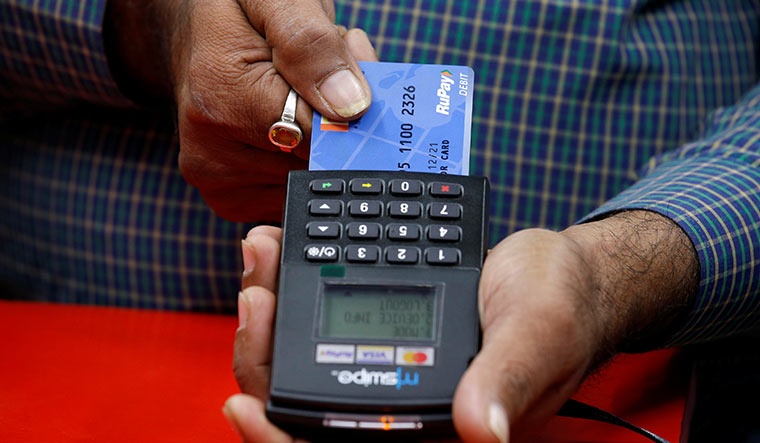 Swipe’s up: A shopkeeper swipes a customer’s debit card in Kolkata. Rupay is the market leader by numbers in india with 60 crore cards in circulation | Reuters

Raghuram Rajan recently sent out a dire message about weapons of mass destruction. “When fully unleashed, (these) WMDs… destroy firms, financial institutions, livelihoods and even lives. They inflict pain indiscriminately, striking both the culpable and the innocent,” he warned.

The former Reserve Bank governor was not talking about nukes or chemical agents or bioweapons; his warning was about the dramatic and sweeping set of economic sanctions that the western powers have slapped on Russia following its invasion of Ukraine.

“If used too widely, they could reverse the process of globalisation that has allowed the modern world to prosper,” he said.

It is a warning for India, too. “India was a closed economy once, but our global integration has increased over the last 30 years and is now very high. So the impact on a globally interconnected economic system is going to be severe,” said Pradeep Multani, president of the PHD Chamber of Commerce and Industry.

While the government played down a similar scenario battering the Indian economy, it has not stopped future possibilities being played out where India bears the brunt of a similar economic chokehold, over its nuclear arsenal or maybe Kashmir. “The sanctions by the US and other western countries against Russia have triggered a fresh debate on international trade,” said K.R. Sekar, president of the Bangalore Chamber of Industry and Commerce and partner at Deloitte India.

Even a cursory evaluation shows how India, since the liberalisation of the economy in the 1990s, has transformed itself from a near-closed socialist economy into near-laissez-faire. It also means dependence on other countries. A major chunk of raw materials that go into India’s manufacturing sector is imported, primarily from China. Active pharmaceutical ingredients to make drugs, which used to be sourced locally before globalisation, are mostly imported from China now. Components for anything from mobile phones to automobiles are imported, while the dependence is near total in petroleum products (85 per cent).

Adding to the alarm levels has been the scale of weaponisation of economics. While sanctions have been imposed by the US on its adversaries all the time—the economic blockade of Cuba started when it was taken over by Fidel Castro’s band of communists in 1959—the range and potency have never been this sweeping as in the case of Russia. A series of actions aimed at weakening, if not crippling, Russia economically was set in motion by the US and its allies straight off after the invasion started. 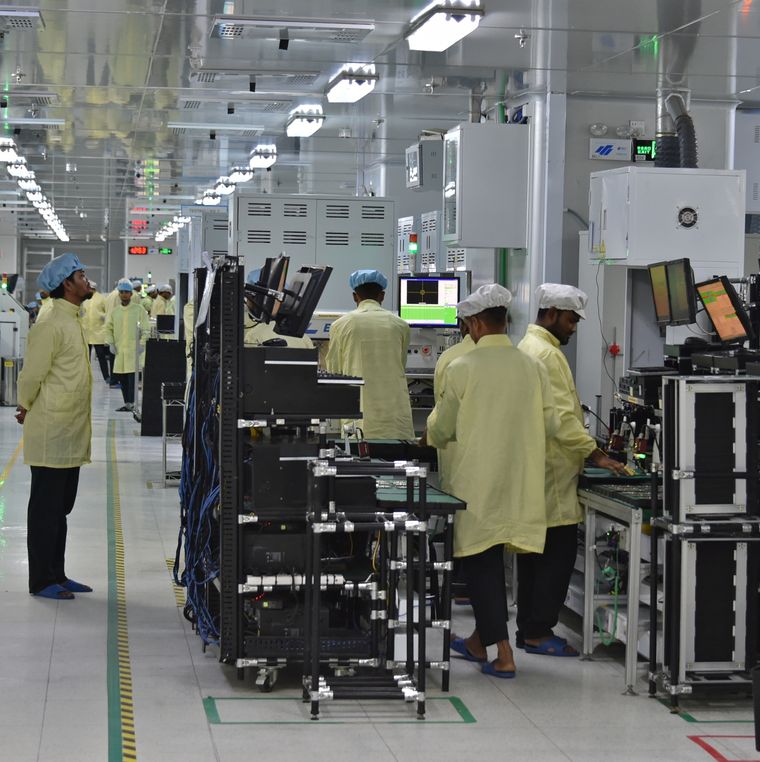 Dragon dependent: A manufacturing and assembling plant of Vivo in Greater Noida. A major chunk of raw materials that go into India’s manufacturing sector is imported, primarily from China. Components for anything from mobile phones to automobiles are imported | Aayush Goel

It started with cutting the access of Russian banks to SWIFT, or the Society for Worldwide Interbank Financial Telecommunications. The ban will squeeze not just transactions to and from Russia, but also its international trade, with Russian companies unable to pay for imports or receive cash for exports.

Russia’s dollar reserves were frozen, and assets of Russian oligarchs (with connections to Putin) and some military companies were seized. The Russian rouble is today non-grata in the global financial system, with the US even banning its citizens and firms from buying or trading in gold owned by Russians. The world’s top three credit card payments providers—Visa, Mastercard and American Express—have withdrawn their services from Russia.

A series of cutting off of business ties followed, ranging from aircraft manufacturers like Boeing all the way down to fast-food giant McDonald’s suspending their operations in Russia. Almost all countries to its west shut their airspace on the Big Bear, while brands like H&M and Apple shut their retail stores from the Urals all the way across to Siberia. The US also ordered a ban on Russia’s most valuable export, its oil and gas. Europe, though, is dilly-dallying because of its dependency on Russian gas.

In a fit of masochistic lash out, Russia banned Facebook, Instagram and Google News from the country (WhatsApp was spared). With the likes of Amazon, eBay, Netflix and Spotify already suspending their operations in Russia (some have cut off Russian ally Belarus, too), questions over the ‘global’ credentials of Big Tech have also popped up.

It is not a new scenario for India. The country was subject to sanctions by many countries after the Pokhran nuclear tests in 1998. However, those were government-led sanctions on defence materials and technologies and loans.

But what has changed now is that it is now a double-barrel weapon—not only is India now an economy interconnected with the global economy, the tech advances of the past decade have made it deeply dependent on American Big Tech players like Google and Meta.

“India is now the fastest-growing major economy in the world and it is greatly interconnected, particularly with the advanced economies—16 per cent of our exports are to the US while China is our major source of import with 16 per cent share,” said Multani. “If we merge our current account and capital account payments and receipts together, it is more than our GDP.”

The stakes are high. And forget the likes of Cuba and Iran which have been labouring under US sanctions for long and how their economies have been in a quagmire, even the immediate impact on Russia has been telling. The value of the rouble has crashed and prices have sky-rocketed in Russia within days of western sanctions. Diffident as it may be on the war front, a desperate Russia has been offering deep discounts on its oil.

“Expected economic consequences of sanctions lead to currency depreciation, higher inflation rates and a significant drop in income levels,” said Sridevi Varanasi, dean, IFIM School of Management. “The impact of sanctions on Russia will be long-lasting.”

‘What if it happens to us’ may be conjecture, but in a world where friends turn foes overnight and an invisible virus can bring the entire world to a halt, nothing is now out of the realm of possibility. Interestingly, while globally there has been a move to decouple from the dollar and the western financial system ever since the global financial crisis of 2008, the economic ‘soft war’ could well speed things up. “It is a tightrope situation for India to preserve its strategic autonomy and safeguard its interests,” said Kapil Kaul, president of the Indo-American Chamber of Commerce.

The reaction in India has been on the expected lines of strengthening Prime Minister Narendra Modi’s Atmanirbhar Bharat resolve. India’s vulnerability when it comes to the dependence on imports from China was laid bare post-Covid and after the worsening of relations between the two countries after the Galwan incident. Since then, the Modi government has embarked on a regime of imposing additional duties on imports from China, banning Chinese companies from the automatic route to start a business in India and setting up a production-linked-incentive scheme to encourage domestic manufacturing of items.

The west unleashing its money power to browbeat the bear could add to the urgency. Modi has been a proponent of the RuPay domestic card payment system. RuPay is already the market leader by numbers in India with 60 crore cards in circulation in the country, though these are primarily debit cards linked to low-value Jan Dhan accounts pushed by the government.

The other vexing matter is the acceptance of the dollar as a global standard of currency. About 85 per cent of India’s imports are invoiced in dollars. State Bank of India last week released a report suggesting that this could be the right moment for India to explore ‘internationalising’ the rupee. “The changing world order and the emergence of Asia will act as an enabler for countries like India to look for an alternative financial currency and alternative financial markets,” said Sekar. More direct currency swaps than using dollars as an intermediary may well increase. India already has agreements with countries like Japan and the UAE.

But not all agree that India needs to get hyper and sew up its trade flanks. Multani pointed out how the economy was not dependent on global consumption, but on domestic demand. “We have our own source of consumption, and also, being an agrarian economy, we actually have a great opportunity there,” he said.

A balanced and shrewd geopolitical and trade strategy may well keep India in better stead than trying to protect oneself by foolishly trying to be self-sufficient in everything. “Dependencies on other countries are inescapable,” said Pranay Kotasthane, chairperson of the High Tech Geopolitics Programme at the Takshashila Institution. “Plurilateral collaboration is a necessity, not a choice.” He suggested a blueprint. “What India needs to do is dominate in areas where the west is relatively disadvantaged—the IT industry, for example,” he said. “The lesson we need to learn is to build up our atma shakti (self strength), not atma nirbharta (self-reliance).”