Will the exodus of OBC allies erode the BJP's hindutva vote base in UP? 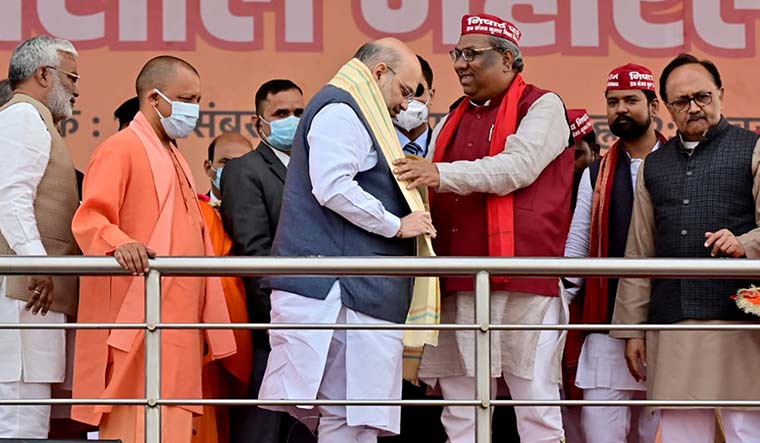 Was it a trickle or a deluge for Uttar Pradesh’s ruling BJP, which saw over a dozen MLAs leaving it days before the party announced its first list of candidates for the assembly polls?

The answer varies, depending on whom one asks. For the BJP, these MLAs were rejects from its list of candidates. But the opposition, most crucially the Samajwadi Party to which most of the defecting MLAs have gone, believes this is the end of the BJP’s multi-caste vote base that flipped it to power in the 2017 elections.

The truth is more nuanced. Most of those who quit were not BJP veterans. The three ministers—Swami Prasad Maurya, Dharam Singh Saini and Dara Singh Chauhan—were in the Bahujan Samaj Party before the 2017 polls. Strictly from an ideological viewpoint, the Samajwadi Party’s socialism is a closer fit for those who have been Ambedkarites. Again, not all defectors belong to OBC (Other Backward Class).

Identified on the basis of socioeconomic backwardness, Uttar Pradesh has 76 castes in the OBC list. While there is no exact figure for their numbers (as caste census has not been carried out), they account for about 40 per cent of the state’s population. As a bloc, they outstrip any other caste. Within this bloc, the Yadavs are the most prominent politically, even though the Samajwadi Party does not identify itself as a caste outfit. Political power to the Yadavs has been an offshoot of their dominant status in the local caste hierarchy where they have traditionally owned land and cattle.

But when denied social and/or economic power, castes seek political power for upward mobilisation. One prominent example of this is the Apna Dal (S) formed in 1995 to garner the Kurmi votes. The rise and importance of that party can be gauged by the fact that its leader, Anupriya Patel, is currently Union minister of state for commerce and industry.

Thus, political power is both a means and an end.

“Social organisation is the sweet poison of democracy if caste does not have political power,” said Sanjay Nishad, who founded the Nirbal Indian Shoshit Hamara Aam Dal (NISHAD) in 2016 to represent communities whose traditional occupations have been river-based, such as boatmen and fishermen. He started his political career with the Bahujan Samaj Party before floating the idea of a separate outfit to empower the Nishads. In 2017, the party won a single seat. Greater glory came to it a year later when it wrested the Gorakhpur Lok Sabha seat from the BJP in a byelection it fought in alliance with the Samajwadi Party. The winning candidate was Nishad’s son, Praveen.

The party is now fighting the election with the BJP. Though a formal seat-sharing announcement has not been made, Nishad said he had handed over a list of 24 probable candidates. He said his party workers were “active” at the sector level in 160 constituencies, where the party would ensure the victory of the alliance candidates.

Nishad’s phrase of choice is ‘pawaa pila ke jhawa bhar vote’ which roughly translates into a quarter of country liquor for a sackful of votes. “This is how we have been deluded for decades. Without political power, prestige and representation, there is no respect for our community. One of our party’s main programmes is to educate community members about our caste’s golden history, including its contribution to the freedom struggle,” he said. 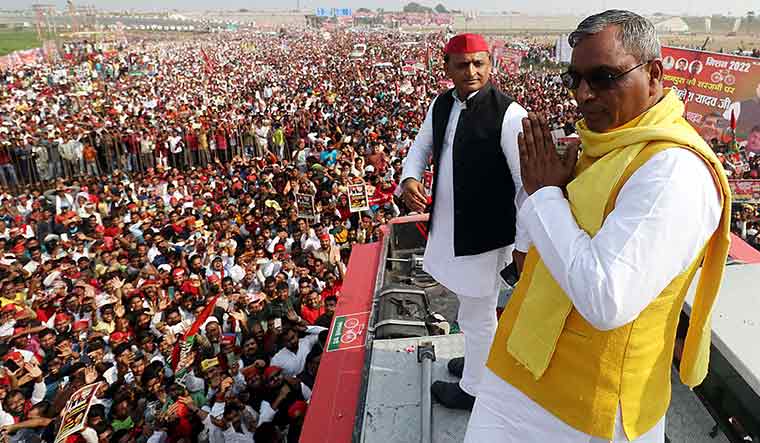 The choice of the BJP is described by Nishad as the choice of being with a “sitting judge rather than a retired one”. It is this judge that Nishad hopes will fulfil the party’s demand of giving his community Scheduled Caste status and its attendant benefits.

Like Nishad who describes himself as a “kingmaker” in the forthcoming polls, another OBC leader who is similarly tagged is Om Prakash Rajbhar, president of the Suheldev Bharatiya Samaj Party, founded in 2002.

Rajbhar’s political journey, too, had started with the Bahujan Samaj Party. In 2017, his party fought the assembly elections in alliance with the BJP and won four of the eight seats it contested. Rajbhar’s relationship with the BJP has since been fraught. This time, he has thrown his lot with the Samajwadi Party.

“Just like taking the name of Lord Hanuman fills one with immense power, our alliance with the Samajwadi Party has strengthened us. We shall show the BJP the path out of the state from the east through which it had entered,” he said.

Rajbhar said he was speaking on behalf of the most backward among the OBCs, who have not thus far had any voice. Of these, the Rajbhars account for 4.5 per cent of the electorate, but when they join hands with other castes such as the Banjaras and the Raghuvanshis, the vote share goes up to 20 per cent.

Unlike Nishad, Rajbhar is not seeking seats this time. He said his goal was to save the Constitution. “The BJP is a party of jhooth (lies). Why has it not implemented the findings of the Social Justice Committee,” referring to a 2018 report that suggested providing reservation for the Most Backward Classes within the existing quota for the OBCs proportionate to their population.

The growing voices of these outfits have led to the question whether this election will mark the end of the BJP’s hindutva vote bank that brings together upper castes, non-Yadav backward castes and non-Jatav Scheduled Castes and whether this will be a caste-based election instead of a religion-based one.

Shilp Shikha Singh, assistant professor of political science at the Lucknow-based Giri Institute of Development Studies and the author of a forthcoming study on political consciousness among Rajbhars, Mauryas, Patels and Nishads, said her field work for the study had revealed the grouses of members of these castes. Most of them believe that BJP wooed their leaders like Maurya and Chauhan with false promises, the biggest of which was that chief ministership would go to a non-Yadav OBC or a non-Jatav SC. But the post went to Yogi Adityanath, an upper caste Thakur, which, for them, was the most counter-productive move that the BJP could have made.

“After inducting mass leaders, the BJP cultivated direct connection with these communities, thereby sidelining the very leaders whose faces it had used to get votes. The BJP showed its character of being a self-dependent party. The leaders it had brought in remained [just on paper], failing to get anything done for their communities,” said Singh.

That this leadership and its vote remains important for the BJP is evident from the fact that in its first list of 107 candidates, 60 per cent belong the OBCs. The challenge for the BJP is thus to charm the OBC voter without upending its own leadership.