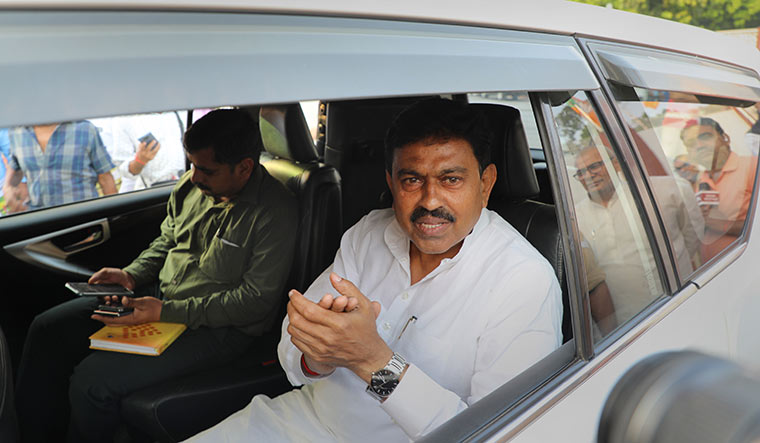 In a soup: Ajay Misra, Union minister of state for home | PTI

KNOWN IN HIS constituency—Kheri, Uttar Pradesh—as Teni Maharaj, Ajay Misra being a Brahmin came as a surprise to those who were not well-acquainted with him. To most casual observers, he had always been Teni. However, it was in the expansion of the Union cabinet in July 2021 that the less-used Misra surname became important.

A few months before the expansion, Misra had won the Sansad Ratna award for 100 per cent attendance in the Lok Sabha and for asking the most public interest questions. That made him the first ever MP from Uttar Pradesh to receive the honour. But, his inclusion in the cabinet as minister of state for home affairs was driven more by the BJP’s aim of bagging the Brahmin vote in the state (around 10 per cent) in the 2022 assembly elections.

On October 3, Misra’s reputation was blown away as cars—one of them allegedly driven by his son Ashish—mowed down three farmers and a journalist during protests over the now repealed farm laws. The special investigation team which is probing the incident has damningly held that the violence was planned.

Numerous non-political sources THE WEEK spoke to in Lakhimpur Kheri district said that the intention had been to clear the crowds so that Deputy Chief Minister Keshav Prasad Maurya could reach a designated meeting spot. Routes were also changed at least twice; but, both times the farmers got wind of the alternatives and moved to obstruct them. Ashish is one of 13 people accused of the violence. Section 307 (attempt to murder) is likely to be added to the charge-sheet.

No one in Lakhimpur Kheri is quite sure how their Teni Maharaj got embroiled in this murky deed. On the day of the murders, colourful banners with “Teni Maharaj zindabad” had been fluttering across his village Banveerpur, the nagar panchayat of Tikunia and the tehsil Nighasan. Locals concede that he always had the image of a strongman, but also said that he was accessible and willing to help.

Surendra Kumar Tiwari, a native of Lakhimpur Kheri, whose wife retired as a homeopathic doctor from the state’s medical services, remembers how difficult it was for him to get her pension released. “I even went to the [controller of pension] office in Allahabad,” said Tiwari. “At the local office, I was told—milke baat karenge (we shall meet and talk)—a euphemism for a bribe.” Misra was not a minister then and Tiwari’s residence fell in the neighbouring constituency of Dhaurahra. Yet, he took his case to Misra, whom he had never met. “In front of me, he called the director and said the matter must be expedited,” said Tiwari. “Within three days, my wife received her pension.”

Demands for Misra’s removal have been relentless and vociferous. The BJP has not responded to these. In October, at a worker’s conference of the party, Misra stood between Home Minister Amit Shah and state BJP president Swatantra Dev Singh, his importance seemingly undiminished and his party defiant.

Misra comes from a family of immense clout. In Banveerpur, his was one of three Brahmin households. The others in his village are Yadavs and scheduled castes. His father and grandfather were notorious as part of the land mafia. “They were involved in the illegal felling of trees in the surrounding jungles,” said a resident of Tikunia, who requested anonymity. “No one could stand up to them.” 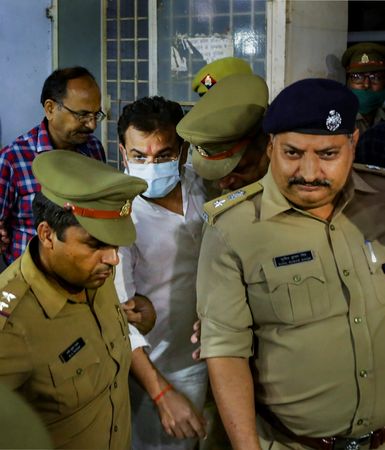 Elders say the family had a tradition of the dolis (palanquins) of new brides from lower castes first stopping at their doorstep. The women would spend the night at the Misra home before being seen off with a gift of new clothes the next day. No one says it explicitly, but the purpose of this halt could well have been to enable the men of the household to sexually exploit the women.

“Teni’s upbringing makes him terribly obstinate,” said a local resident who was unwilling to be identified. “If he wants something he must have it.” The perception is that an increase in political power unleashed the worst in him. Misra rose in politics from the vice chairman of the district cooperative bank, Kheri, to member, zilla parishad, Kheri. He was part of the assembly from 2012 to 2014. The first of his two consecutive stints as member of parliament started in May 2014.

On Misra’s Lok Sabha profile, the 61-year-old describes himself as an introvert and an “ordinary student having been interested in studies and also showed keen interest in sports”. However, one former classmate remembered that he was so disinterested in coming to school that he had to be, at times, dragged by the household help to classes and would come kicking and screaming. His profile further reads: “Later on during professional life, moved by social inequalities and deprivation of people of human rights, joined politics and started a political career as BJP District General Secretary....”

Sports is Misra’s great love. He organises tournaments of cricket, powerlifting and wrestling. In these, he often does commentary. As a student, he participated in powerlifting and volleyball tournaments till the district level, while he played cricket for his university at Kanpur. His other interests include “study of different cultures, staging plays and classical music. Study of literary stories and articles”.

Misra’s caste gives him unique protection in a state where Brahmins are perceived to be treated unfairly. In August 2020, Deomani Dwivedi, a Brahmin MLA from Lambhua (Sultanpur), wrote to the principal secretary of the assembly to give notice of a question that demanded to know the situation of Brahmins in the state.

The Brahmin equation in Uttar Pradesh is tricky. They may not be too many, but they are influential. It does not help that of the two deputy chief ministers, the Brahmin face, Dinesh Sharma, is hardly seen or heard from. Of the 24 ministers in Yogi Adityanath’s cabinet, four (besides Sharma) are Brahmins. The most recent inductee among these is Jitin Prasada, who holds the relatively minor portfolio of technical education. Prasada’s inclusion into the ministry soon after he left the Congress was a clear nod to the Brahmin voters in the state. Among the 21 ministers of state, three are Brahmins; of the nine ministers of state with independent charge, too, three are Brahmins.

Bala Prasad Awasthi, BJP MLA from Dhaurahra, said he did not believe that his caste had been targeted in any way under the present regime. “There are unwanted elements in every caste,” he said. “Their elimination in no way represents how a caste is dealt with.” Awasthi’s reference is to Vikas Dubey, a gangster who was killed by the state police in July 2020. Dubey, a Brahmin, is often quoted as an example of how the caste is treated under the state’s Thakur chief minister.

Awasthi is, however, unwilling to comment on the impact of Misra’s continuance as a minister. “I have not been able to determine the sequence of events, so I cannot comment on the party’s thoughts on him,” he said. Misra’s removal is knotty. To save itself from any backlash, the party’s best hope could be that he would resign as the findings of the SIT have become more serious.

Misra himself is on edge. He was caught on camera rebuking a reporter for asking bewakoof (stupid) questions about his son’s involvement and went as far as calling Ashish bechara nirdosh (poor innocent). How close this edge is to a fall remains to be seen.