Modi govt at its weakest point, but opposition finds it hard to challenge the BJP 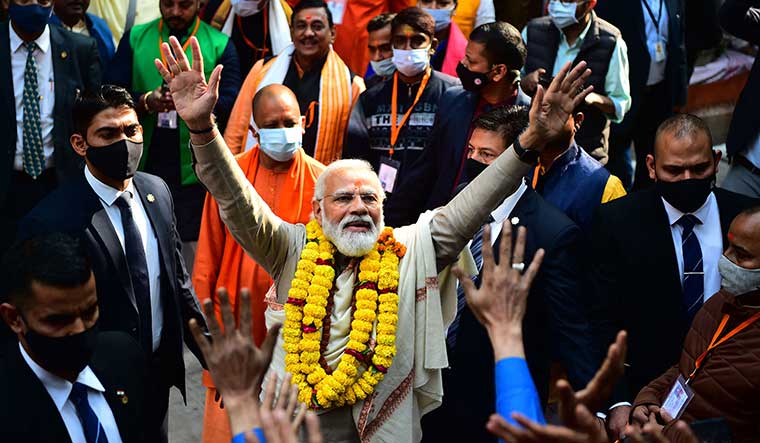 As 2021 draws to a close, the Narendra Modi government is perhaps at its most defensive, after having been forced to repeal the three contentious farm laws. The move is perhaps the biggest about-turn by Modi, who has built for himself the image of a strong and decisive leader. And this has happened when other issues such as price rise, unemployment and the impact of Covid-19 on the lives and livelihood of the people are becoming common topics in public discourse.

It is also a time when the talk of opposition unity has become more fervent. Already, various permutations and combinations are being discussed for getting the anti-BJP bloc together for the Lok Sabha elections in 2024. However, despite the ruling dispensation being at its weakest point, Modi and the BJP, as of now, find no reason to be too alarmed. The opposition’s attempts, be it in terms of providing an alternative governance model or a leadership option, have failed to cause Modi any serious concern.

The basic premise of the talk of getting anti-BJP parties together is that in the Lok Sabha elections in 2019, the saffron party won 303 seats and had 37 per cent vote share. It is argued that the opposition, with its 63 per cent vote share, represents a wider section of the population, and if these parties come together, they obviously will have a bigger support base than the BJP. To ensure that this vote share does not get divided, an ideal situation would be that there are one-on-one fights against the BJP and its allies. However, the catch lies in the near impossibility of getting the disparate forces and individual egos that constitute the 63 per cent vote share together.

Whither the principal opposition party?

A primary issue being discussed is where the Congress figures in the scheme of things. Is it failing in its role as the principal opposition party in posing a credible challenge to Modi and the BJP? Is it pulling down the anti-BJP bloc with its frailties and intra-party skirmishes? Whether regional parties can cobble together a viable non-Congress, non-BJP alternative? These are some of the questions being asked with regard to the Congress’s role in the opposition space.

On June 25, a meeting of opposition leaders held at the Delhi residence of Nationalist Congress Party supremo Sharad Pawar evoked much interest, especially since the Congress was not invited. It was described as an effort to explore the possibility of putting together a non-Congress, non-BJP front. However, with the event not garnering the desired response, its organisers promptly downplayed it and Pawar said that an opposition alliance without the Congress was not possible. 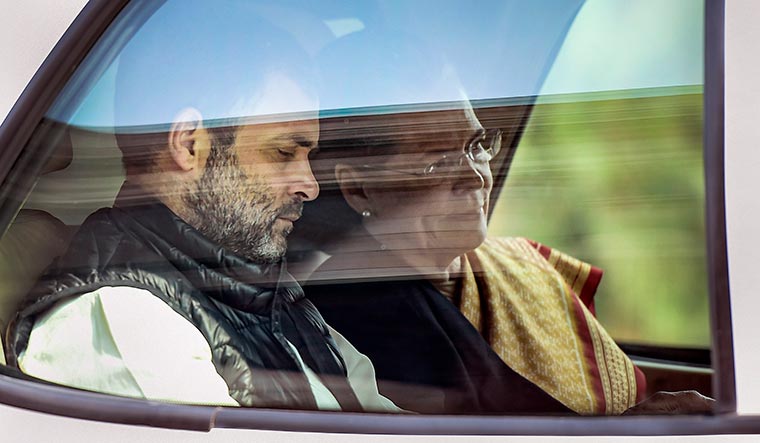 Rough ride: With the authority of Sonia and Rahul Gandhi on the wane, the opposition lacks a towering figure who can unite various parties | PTI

Congress president Sonia Gandhi had on August 19, against the backdrop of the unprecedented unity shown by the opposition parties in the monsoon session of Parliament, convened a meeting of what are known as ‘like-minded parties’. The basic aim of the meeting was to emphasise the centrality of the Congress in any unified challenge mounted by these parties to the BJP regime. She said there was no alternative to working together and a decision was taken that the parties would hold joint protests.

The plans, however, fell apart soon enough and there were no joint opposition protests. If Sonia had hoped for a repeat of her 2004 endeavour when her outreach to regional players had evoked a positive response, a similar reaction was not forthcoming this time. For one, the Congress is a much weakened entity, its national footprint has shrunk, its leadership does not enjoy as much authority now, and both allies and frenemies are not particularly interested in strengthening the party.

The talk of a front of regional parties without the Congress is refusing to die down, especially after the strong showing of regional satraps in the assembly elections in 2020, particularly Trinamool Congress chief Mamata Banerjee. Pawar, known to keep the Congress guessing about his moves and motives, has more than once since the damp squib of a meeting in June, described the grand old party as an “impoverished landlord who has lost all his land and who can’t even look after his house anymore”. 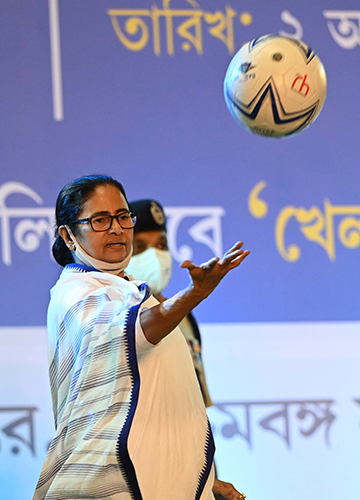 Game on: Mamata Banerjee’s supporters say her credentials as a leader capable of taking on modi are indisputable | Salil Bera

The race to replace the Congress

In the coming assembly elections, the Congress has a different worry besides taking on its main rivals. It is dealing with a situation involving non-BJP parties threatening to eat into its space. In Punjab, where the party would have preferred a direct fight with the Akali Dal, the Aam Aadmi Party has come up as a serious contender. In Uttarakhand, which has thus far seen a contest between the Congress and the BJP, the AAP threatens to eat into the anti-incumbency votes. In Goa, an already weakened Congress has to put up with not just the AAP, but also the Trinamool, which declared its entry into the coastal state by inducting veteran Congressman and former chief minister Luizinho Faleiro. The AAP with its noteworthy performance in civic polls in Gujarat has given the Congress reason to worry as the state goes to polls in late 2022.

The Trinamool, which is making aggressive moves to be recognised as a replacement of the Congress in the opposition realm, has made clear its plans to expand in the northeast. Assam leader Sushmita Dev, who was known to be close to former Congress president Rahul Gandhi, has joined the party and could helm its expansion moves in her home state and also Tripura. The Trinamool is said to have eaten into the Congress’s vote share in the recent civic polls in Tripura. The Congress was dealt a blow by Mamata’s party in Meghalaya, when 12 of its 17 MLAs led by former chief minister Mukul Sangma walked over to the Trinamool, making it the main opposition party in the state.

Even if they may not have overt prime ministerial ambitions and may not be in a rush to occupy the pole position in the opposition space, most allies and rivals want to keep the principal opposition party in check in their respective territories. The Dravida Munnetra Kazhagam in Tamil Nadu or the Rashtriya Janata Dal in Bihar or the NCP in Maharashtra are not interested in a revival of the Congress. Even relations with Jharkhand Mukti Morcha, with which the Congress shares power in Jharkhand, have been fraught with tension. On the other hand, parties such as the Samajwadi Party and the Bahujan Samaj Party have kept their distance from the Congress, not willing to give it any space in Uttar Pradesh.

Who will counter Modi?

In 2014, Trinamool leader Derek O’Brien had suggested that the various parties that have emerged out of the Congress could form a front with Mamata leading it. Riding high on her success in the West Bengal elections, where she comprehensively defeated the BJP, Mamata is on a mission to be recognised as the leader best placed to take on Modi in 2024. She has been nominated as chairperson of the Trinamool parliamentary party to give her a national role. She has herself declared, taking off on her assembly poll slogan that now “Poore desh mein khela hoga (Now, the game is on, all over the country). Mamata has been outspoken about where she sees herself vis-a-vis the Congress and its leadership, criticising the party for failing to get its act together, ridiculing Rahul for his visits abroad and derisively asking if the United Progressive Alliance, a grouping of parties the Congress headed when it was in power from 2004-2014, still exists.

Mamata’s supporters say that her credentials as a leader capable of taking on Modi are indisputable given the gumption with which she fought the BJP in the assembly elections, that she heads a state which sends 42 MLAs to the Lok Sabha and that she has the required stature for other opposition leaders to rally around her. 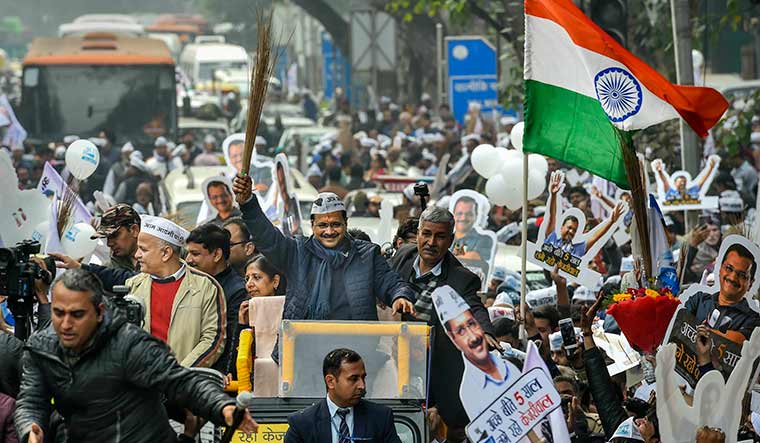 National mission: Arvind Kejriwal believes that a strong performance in the Punjab elections will establish his position as a major challenger to Modi | PTI

A little away from the opposition centrestage, AAP’s national convener and Delhi Chief Minister Arvind Kejriwal is attempting to emerge as an alternative at the national level, expanding to other states and hoping to win Punjab in the coming round of assembly elections. His supporters say he has national appeal and in the event of the AAP managing to emerge as the dark horse in Punjab and making its presence felt in the other states that go to polls in 2022, he would want to pitch himself as a challenger to Modi. He had taken on Modi in the 2014 Lok Sabha elections and the AAP had contested seats across the country, but the results were disastrous. AAP leaders, however, claim that the party is now much better placed to be a serious contender with some ground work already done in several states.

A point made by those raising doubts about the ability of the Congress leadership, more specifically Rahul, the party’s de facto president, is its failure to emerge as a weighty counter to Modi. Rahul’s supporters argue that he has been the most consistent among the opposition leaders in countering the BJP and the RSS, and that he has never desisted from taking on Modi. And while this may be correct, there is a feeling that his persona has so far failed to measure up to that of Modi and he has not been successful in convincing the people about his leadership abilities.

The indispensability of the Congress

The Congress has failed to recover from the debilitating defeats in the Lok Sabha elections in 2014 and 2019. There has been an exodus of leaders from the party and its leadership confusion continues, with Sonia holding interim charge of the party, but Rahul, for all practical purposes, being the go-to person for all important decisions and party general secretary Priyanka Gandhi Vadra emerging as a key decision-maker and firefighter. In what has been seen as an open dare to the Gandhis, the so-called ‘Group of 23’ leaders have been demanding an overhaul of the party, elections at all levels in the organisation and a leadership that is visible and effective.

However, while there are voices in the opposition that point out the shortcomings of the Congress to argue in favour of forming a front without it, what cannot be ignored is that it is the principal opponent of the BJP in a large swathe comprising states such as Rajasthan, Madhya Pradesh, Chhattisgarh, Gujarat, Himachal Pradesh, Uttarakhand, Haryana and Assam, as also one of the main players in Punjab. Also, in the Lok Sabha polls in 2019, while the Congress managed to win just 52 seats, its vote share was 20 per cent compared with the 37 per cent vote share of the BJP, showing that it still enjoys a substantial support of the people. It is said in favour of the Congress that it is the only opposition party with a pan-India identity unlike the regional players who are limited to their respective states. It is argued that a national party has to be the pivot of the opposition conglomerate for it to be a stable formation.

With the authority of the Gandhis on the wane, the opposition space suffers from the lack of a towering figure who can bring together the disparate forces. The main test before these parties is to provide a stable alternative to Modi and come up with a narrative that inspires confidence in the people.

Another challenge before the opposition parties would be to counter Modi’s presidential style. The prime minister continues to be way ahead of other leaders in the popularity charts and his persona dominates the poll discourse and narrows it down to the question—if not Modi then who?