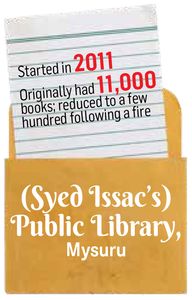 Daily wage labourer Syed Issac’s self-built library in Mysuru went viral on social media this April—when it was destroyed in a fire.

Issac, 63, lives in Mysuru’s Rajeev Nagar, where 90 per cent of residents speak Urdu. Issac might have started out as an illiterate person, but he is no ignorant man. His lack of education prompted him to start a library in 2011, on a street corner near his home.

His library then was two chairs and a couple of Kannada and Urdu newspapers tied to the branches of a tree. As days went by, his library attracted more readers. Most of them were people who frequented a nearby coffee shop. As more and more students and office-goers kept visiting, Issac identified an empty public plot nearby that was used as a dumping ground and set up a makeshift library. His library collection, too, grew, with 11,000 books in Kannada, Urdu and English, and 24 newspapers.

Though the investigation concluded that the fire was an accident, Issac believes it to be a sabotage to silence him from enlightening minds. He thinks antisocial elements from his locality were behind the torching.

But the incident has only fired him up. He is back on the streets with a few hundred books donated by well-wishers who saw his viral video. “All the hate and crime in the society is because of lack of proper knowledge. Books can help people expand their horizons,” says Issac.

His wife, Shaheen Taj, supports his devotion to the library. As Issac tends to his library from dawn to dusk, she rolls incense sticks to sustain the family.

While the government had promised to rebuild the library, he is still waiting for the promise to come true. A die-hard fan of Kannada actor Dr Rajkumar and former president A.P.J. Abdul Kalam, Issac, meanwhile, is building his collection, book by book.