Gnanalaya library in Tamil Nadu is a collector's find 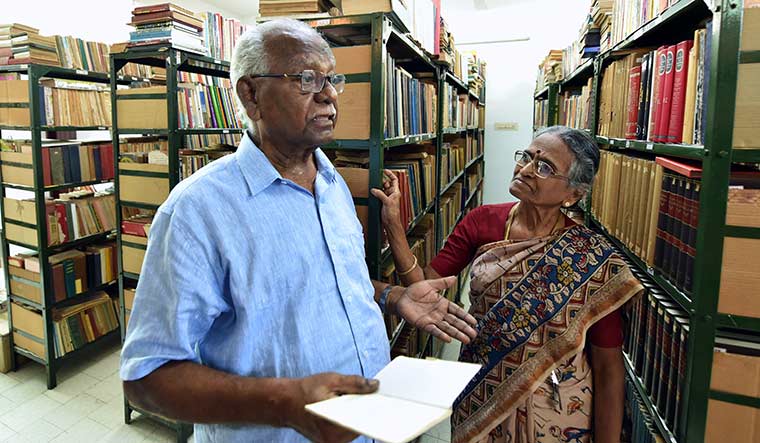 Seeker of knowledge: Krishnamurthy with his wife, Dorothy | Aayush Goel 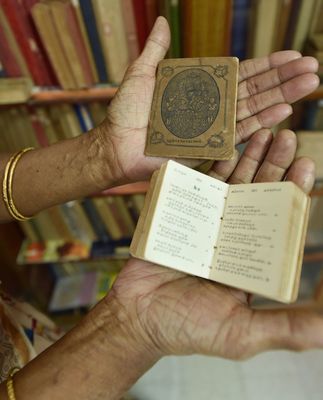 Dravidian icon C.N. Annadurai was one of the best Tamil orators of his time. His narrative style was such that he would link world history to present-day politics, a style that was visible in his writings, too. For instance, his Makkal Karamum Mannan Siramum (1968) discussed the English Revolution in detail, in about 74 pages. But the second edition, published three years later, omitted those pages. The missing pages could very well have put the current linguistic politics in context. One place where you can see that rare first edition is in Pudukottai, an hour-long drive from Trichy in south Tamil Nadu.

Tucked away in the quaint little town of Thirukokarnam in Pudukottai, Gnanalaya (place for knowledge) is a treasure trove of rare books. And, the seeker of these rare finds is B. Krishnamurthy, who started collecting books while he was in college. Today, the library has more than 1.2 lakh books, including 80,000 in Tamil and 15,000 in English, making it one of the largest private libraries in India. 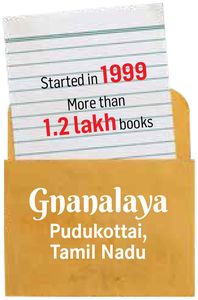 Krishnamurthy’s father was a district education officer, and that exposed him to Tamil literature and culture early, he says. “I was able to read lots of books other than the usual academic texts. The importance of books and reading was instilled in me at a very young age,” he says.

His first book came from his father—Swadesha Geethangal (freedom songs), a self-published anthology by poet C. Subramaniya Bharathiyar. The first edition had a poem by Muthukumarasamy Pillai, titled ‘Yen Magan (My Son)’. The second edition, however, did not carry this poem. “Bharathiyar used to earlier publish poems of others in his collection. But in the next edition, he published only his poems,” recalls Krishnamurthy, 81, a retired government school teacher.

The next book in his collection was also a rare one—Thanippadal Thirattu (solo collection of poems). It was signed by Ku Alagirisamy, a prominent Tamil writer who had reportedly told Krishnamurthy’s father that the book was extremely rare. And, thus began his quest for rare books. He would buy old books in Trichy, land up at old libraries that were closing down or in front of houses that were discarding their collection, and borrow books from family and friends. And, that is how his two-storey library came up. Gnanalaya also has a rare photocopy of the first-ever published Tamil book—Thambiran Vanakkam (1578), a translation of Doctrina Christam from Portuguese.

Krishnamurthy’s passion for Gnanalaya is shared by his wife, Dorothy, a retired professor of mathematics. The couple spend at least eight hours a day in the library.

Krishnamurthy has found a unique way of sharing his stories about the books. He now records them digitally. A digital recorder is placed on each shelf, giving details about the exclusivity and content of the books. Way to go digital!