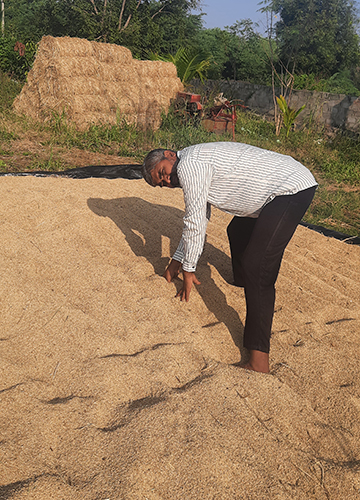 Rough year: K. Raji Reddy, a farmer from Gorrekunta in Warangal, with his produce.

DURING THE RECENT kharif season, K. Raji Reddy’s day would start early. The farmer from Gorrekunta village in Warangal district, northern Telangana, would reach his field by 5am. He would tend to his cattle, have a look around and head home for a quick breakfast. A little later, he would return to the field, walk around, rest under a shady tree, feed the cattle and return home by evening. Throughout the season, not once did he use pesticide or rely on electricity to water the fields. The two-acre paddy crop almost took care of itself, he said, and gave him good yield.

“Life is easy when cultivating paddy,” said the 40 year old, who used to grow cotton and chillies for most of his life. “While cultivating chilli, I had to work on the farm all day.”

As Telangana was water-deficient for decades, paddy cultivation was sparse in the state. Coastal Andhra met Telangana’s rice needs. However, in the past few years, there has been a drastic shift. Currently, Telangana has 55 lakh farmers. And, according to rough estimates, almost 80 per cent of them now grow paddy. About five years ago, this figure would have been under 30 per cent. In 2015, paddy was grown on 53 lakh acres; now it is 1.05 crore acres. The total paddy production for this year’s rabi and kharif seasons was 2.5 crore tonnes, the highest in the state’s history.

There are many reasons for this boom, including new irrigation projects, better supply of electricity and improved machinery. A few years ago, Chief Minister K. Chandrashekar Rao had raised the slogan ‘Koti Ekarala Magani’ (one crore acres of irrigated land). Work began on a war footing, and the state and political leaders encouraged farmers to grow paddy. Every season since, the administration has taken pride in announcing “bumper harvests” and assuring farmers that it would buy the yield.

This season was different. Rao himself asked the farmers to stop growing paddy. The state’s agriculture policy seems to have backfired; overproduction has imbalanced the demand and supply chain. Telangana’s godowns are overflowing with rice, while farmers wait for the state to buy their current harvest. Moreover, both state and Centre have told farmers that they will not buy paddy from the current rabi season.

However, most farmers, including Raji Reddy, have refused to stop planting paddy. One such farmer—Manda Raja Mallu of Gopalpur in Karimnagar district—has eight acres under paddy. Earlier, farmers in the district used to grow sesame, corn and peanuts. “I can make a profit of 030,000 on every acre of paddy without working too hard,” said Raju. “Other crops are labour intensive and do not give good returns. For example, I grow vegetables on five acres and, for that, I have to search for labourers, who are hard to get. On top of that, I have to pay them Rs400 or more a day.”

He said he was hopeful of the Centre and the state changing their minds by harvest time. “I fear the worst if that does not happen,” he said. “The situation might get out of hand and irate farmers might attack agriculture officers and local leaders.”

In Telangana, only fine or ‘thin’ varieties of rice are grown during kharif season. These are eaten extensively within and outside the state, and hence have a good market. During rabi season, common variety or ‘fat’ rice is grown as it can withstand the sudden spike in temperature during summer (harvest time). But this variety has few takers; neither Telugus nor people elsewhere eat it much.

As per the existing system, farmers take their paddy to procurement centres run by the state civil supplies department. From there, it is sent to rice mills. The Food Corporation of India (FCI) buys the milled rice for the public distribution system. The state usually does not buy paddy from farmers; it only forwards it to the FCI. The minimum support price of fine and common variety paddy is Rs1,960 and Rs1,940 a quintal, respectively. The farmers can try their luck in the open market if they are not satisfied with this price.

The mills turn the common variety into parboiled rice through a three-stage process. The rabi season paddy is turned into parboiled rice (boiled and dried) to further overcome the problem of the rice breaking in the heat of summer. Parboiled rice is usually sent to the FCI’s central pool to be distributed in Tamil Naidu, Kerala, and parts of Maharashtra and Chhattisgarh. But, local cultivation in these states has increased, and the FCI has said that it has enough stock to last it for years.

The FCI’s refusal to procure the paddy has also brought into question the future of the 2,600 rice mills in the state; 1,500 of these are designed to process parboiled rice.

Devender Reddy, former president of the United Andhra Pradesh Rice Millers Association, proposed that the governments reward farmers with direct money transfers based on the area of paddy grown, and demanded that the mills be permitted to sell the rice in the markets (currently, they can only sell it to the FCI). As for parboiled rice, he said that the Centre should sell it on the international market and kick-start the cycle of procuring like before.

The paddy issue has also triggered a political fight, with the ruling Telangana Rashtra Samithi and the BJP accusing each other of misleading farmers. The state government has criticised the Centre for not procuring enough from the state, like it does from Punjab. The Centre, however, said that it had informed the state well in advance that it would not procure parboiled rice and blamed it for not preparing for the eventuality.

The farmers are caught in the crossfire. Kanneganti Ravi, state coordinator of the NGO Rythu Swarajya Vedika, said that the farmers would have to sell their produce at Rs1,500 a quintal or less in the open markets if the government does not buy it at MSP. “There will be more suicides,” he said. “The farmers will be forced to fight on the streets or face a severe loss. There might be a strong reaction, which can lead to an agitation.”

Agriculture experts blame both the state and the Centre. G.V. Ramanjaneyulu, executive director of the Hyderabad-based Centre for Sustainable Agriculture, called the obsession with paddy an “ecological crisis”. “There should have been a strategy to reduce the area under paddy and move to other crops,” he said. “The Centre is also buying only paddy, and not the other crops. One acre of paddy consumes as much water as 10 acres of other crops. Traditionally, in Telangana, pulses, millets and other crops were cultivated. The soil used for paddy cultivation is already too damaged to grow other crops. Also, where are the seeds to grow alternative crops?”

The farmers are bracing for an uncertain future. “In the worst-case scenario,”said Raji Reddy, “I will store the rice that I grew and survive on it till I can.”