The controversial Hyderpora killings are a wakeup call for the BJP 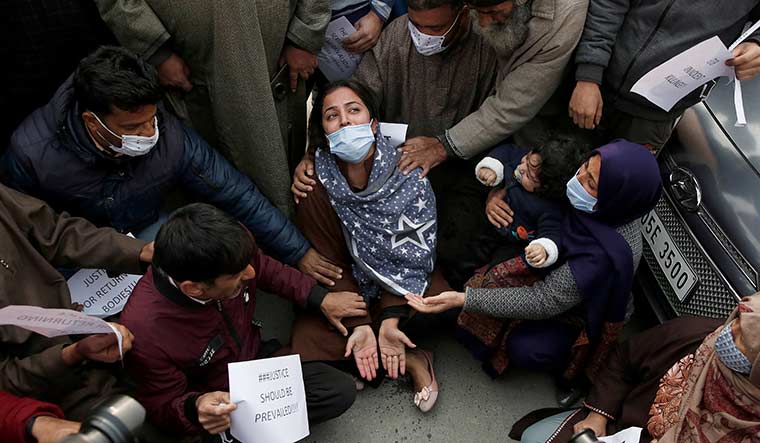 Seeking justice: Wife of Dr Mudasir Gul, who was killed in a gun battle, with her relatives during a protest in Srinagar | Reuters

ON NOVEMBER 15, at around 4:30pm, security forces launched a search operation at a commercial building in upscale Hyderpora, Srinagar.

“A joint team of the police, 2 Rashtriya Rifles of the Army and the Central Reserve Police Force have launched an operation on a ‘specific input’about the presence of terrorists in an illegal call centre rented for business in a private building,”said a police statement.

Hours later, four people were declared killed in the encounter. Among them were building owner Altaf Ahmed Bhat and tenant Dr Mudasir Gul, a dentist-turned-real-estate-contractor with an office on the first floor of the building. The initial police statement called them ‘terrorist associates’.

Inspector General of Police Vijay Kumar said the other two casualties were a foreign militant called Bilal Bhai or Haider, and his associate Amir Ahmed, from Banihal in Jammu’s Ramban district.

A more detailed police statement followed. “In order to show the suspect call centre in the building, the owner of the building, Altaf Ahmed Bhat, as well as the tenant, Mudasir Ahmad Gul, were called to accompany the search party,” it said. “As the search party approached a room on the top floor of the building, the hiding terrorists started firing indiscriminately towards the party, which retaliated. In the initial exchange of fire, both individuals accompanying the search party received critical gunshot injuries and succumbed to their injuries. In the ensuing encounter, both terrorists hiding in the room were eliminated and their bodies were retrieved from the site of the encounter.

“Amir Ahmed was a resident of Banihal who was earlier working as an OGW (over ground worker) of an LeT (Lashkar-e-Taiba) commander. Preliminary investigation revealed that Gul was running an illegal call centre in the said building rented for business and was working as a terrorist associate. The recoveries and other digital evidence indicated that a fake call centre was established to provide logistical support to the active terrorists.”

The statement also said that Haider was involved in the recent shootout at the Jamalatta area of Srinagar, and that Gul had helped him escape the spot in a Maruti Alto. Unlike the earlier statement, this one did not call Bhat a ‘terror associate’.

It was later revealed that Ahmed was a peon in Gul’s office and his full name was Amir Ahmed Magray. His father, Abdul Lateef, refuted the police claim that he was a ‘hybrid militant’ and demanded his body for burial. Families of Bhat and Gul did the same. The bodies of all four men had been buried at Handwara in Kupwara, 70km north of Srinagar. Since Covid-19 struck, security forces have not handed over bodies of slain militants to their families. This was done to avoid crowded funerals.

In a viral video that shocked and enraged many Kashmiris, Bhat’s 13-year-old daughter, Noha Altaf, described the moment she learnt about his death. “My chachu (uncle) got a call at around 10pm and he started crying,”she said, breaking down. She said a cousin, who is a witness, told her that her father was picked up three times that day. “Other witnesses were also killed,” she said. When she asked the security forces why they had thought her father was a ‘terror associate’, they apparently laughed at her. “What could I say to them?”

She also spoke about Gul’s son, too. “My brother is in his class,” she said. “He is so young. What do we tell him? He is very close to his father. I am attached to my father. Now, what will I do? How do I take care of my mother?”

The eyewitness account of the girl’s cousin was corroborated by witnesses who did not want to be named. They said that security forces had cordoned off the area when the operation started; workers from nearby shops were herded into an automobile showroom, and their phones were taken away. 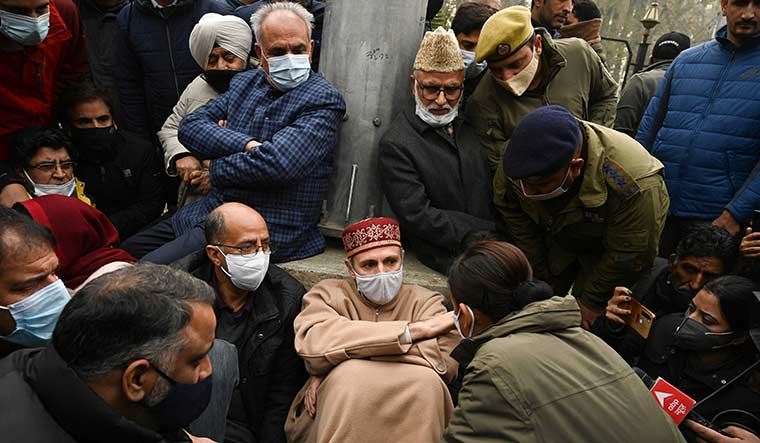 Times of Trouble: Former chief minister Omar Abdullah at a protest demanding justice for the killings of two civilians | AFP

“Bhat, who sold cement and paint from the ground floor of his building (and was in the showroom with the rest of the workers), was summoned twice by the search party to accompany them into the building,”said a witness. “When he was asked for the third time, he asked Gul to accompany him as the two got along very well.”

The witnesses said that they heard gunshots from the building twice in five minutes. The men in the showroom had no idea what was happening. They were let out only around 11pm, and came to know of Bhat’s death from his elder brother, Abdul Majeed.

They said Bhat, a resident of Srinagar’s old Barzulla, was a simple man who treated everybody with respect and even got along with the security forces; he sometimes offered them tea, too.

The families of Bhat and Gul staged a sit-in at Srinagar’s Press Enclave, in the biting cold, demanding that the bodies be returned. Members of civil society and political parties also joined in. “We want the bodies to receive last rites as per our religious obligations,”said Majeed, amid slogans of “Lashon par haq kis ka hain? Warison ka hain. Warison ka hain (Who has the right to the bodies? The families of the dead)”.

Holding her 18-month-old daughter, Gul’s wife, Humaira Mudasir, sat in protest and refused to leave till his body was returned. “I want to see him one last time,”she said, sobbing. “I will prepare him for the grave like a groom.” She accused the police of changing their statements about her husband. “Sometimes they say he is a doctor, sometimes they say he is an OGW,”she said, hitting her face. “He was a BDS doctor and was also running a real estate business called Ababeel. He used to renovate and build people’s homes.”She said she had made plans to celebrate his birthday on November 27. “But now I am mourning his death.”

She said the police were also lying about Ahmed. “He was working in our office; he also lived there. He was not a terrorist,”she said.

One of Gul’s relatives, who did not want to be named, said that Ahmed had been frisked before everyone was taken into the showroom, and that the security forces had let him go. Later, possibly upon questioning Gul and realising his connection with Ahmed, they called the latter back; he was in the canteen of a nearby private hospital at the time. “Would he come back if he was a terrorist?” asked the relative.

As the protest gathered momentum, electricity to the area was snapped. The families continued the protest under the headlights of their cars. Sources said the police then told the two families that the bodies would be returned and asked them to end the protest. The families apparently wanted it in writing; the police evicted them forcefully and took them into preventive custody.

Abdullah called Lieutenant Governor Manoj Sinha and requested him to order an investigation into the killings. Amid growing outrage across Kashmir, the police handed over the bodies of Bhat and Gul to their families on condition that the funeral would be a low-key affair. They were both reburied in their ancestral graveyards at Barzulla and Nowgam. Only family members, relatives and some neighbours were present.

Ahmed’s body, however, was not exhumed. “I appeal to the government to return my son’s body for the last rites,” said his father. “I have myself killed a militant with a stone for which the state government and the Army gave me a bravery award. I have taken bullets and my cousin was also hit; after that we migrated [to Jammu] for 11 years.”He said he had travelled to Srinagar to get the body, but was denied. “I want my son’s body so that I can give him a proper burial,”he said.

Given the outrage among the citizens, the government ordered a magisterial investigation and asked the authorities to submit a report within 15 days.

“The Jammu and Kashmir administration reiterates its commitment to protecting the lives of innocent civilians and it will ensure there is no injustice,” read a statement from the lieutenant governor’s office.

The Hyderpora encounter is the third incident where families of the men killed in an anti-militancy operation have challenged the official version. Last December, Jammu and Kashmir Police had filed a charge-sheet against three people, including an Army officer, for killing three youth in an alleged fake encounter in Shopian.

In October, the family of Imtiyaz Ahmed Kakroo, in Bandipora, rejected police claims that he was an OGW for The Resistance Front (which security forces say is an offshoot of the LeT) and that he was involved in the killing of a civilian, Muhammad Shafi Lone.

Of late, with militants targeting civilians, especially the minority Kashmiri Pandits and Sikhs, the terms ‘hybrid militants’and ‘terror associates’have gained currency among security forces. According to the police, a ‘hybrid militant’is a member of a militant group who has no police record and works under the radar. They are sympathetic to the militant cause and target civilians and even policemen.

However, human rights activists like Muhammad Ahsan Untoo, chairman of the International Forum for Justice and Human Rights, Jammu and Kashmir, said the security forces were using the terms to cover up intelligence failures and act against people at whim. “Action can be taken against anybody by labelling him a ‘hybrid militant’,”he said, adding that, if the police had information about Bhat or Gul being ‘terror associates’, why were they not arrested and dealt with according to the law?

National Conference vice president and former chief minister Omar Abdullah also found the term ‘hybrid militant’baffling. “As chief minister, I chaired a series of Unified Headquarters meetings,”he said. “I have read so many intelligence reports and I do keep an eye on the happenings across the world, but I have not heard about ‘hybrid militants’.”

Political observers in Kashmir say that previous state governments had found civilian killings too hot an issue to handle, and that the Hyderpora killings were a wake-up call for the BJP, which thought it had controlled the situation in Kashmir after Article 370 was revoked in 2019.