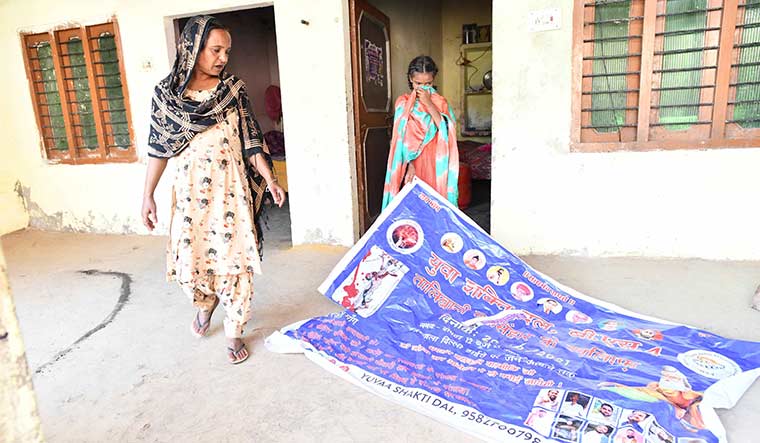 Quest for justice: Lakhbir Singh’s sister Raj Kaur and her daughter show a poster made by a Dalit organisation demanding justice for him | Sanjay Ahlawat

A POLICEMAN FROM the local intelligence unit stood outside the house of Lakhbir Singh, the dalit Sikh labourer who was allegedly murdered by the Nihangs. The charge is that the quasi-monastic order of Sikh warriors killed him at Singhu border, near Delhi.

Lakhbir was killed for allegedly desecrating the Sarbloh Granth, a Sikh holy book. Lakhbir’s two-room house is in the Mazhabi Sikh cluster in Chima Kalan village, barely five kilometres from the Pakistan border in Punjab’s Tarn Taran district. The starkness of his room was unnerving. It was sparsely furnished, with just old pictures of Sikh gurus on the walls. Lakhbir’s sister, Raj Kaur, had gone to the bank, so her room was locked.

Kaur returned an hour later, along with her 11-year-old daughter. She is yet to recover from the shock of her brother’s death. “On October 10, Lakhbir asked me for some money so that he could go to a mandi in the nearby Chabal Kalan village to find work,”said Kaur. “I gave him 050. It was only six days later that I came to know what happened to him, when boys in the neighbourhood saw videos on their mobile phones.”

Kaur, who works at the village sarpanch’s farm, had repeatedly recounted her final meeting with Lakhbir to the police and other visitors. “I don’t know how he ended up at the Singhu border, or with whom he went, or whether he was lured by someone. But I am sure he cannot be involved in sacrilege,”she said.

Kaur shared a special bond with her brother as the siblings grew up together in challenging circumstances. “I was adopted by my paternal aunt and her husband, Harnam Singh, who was with the BSF, as they did not have any children,”she said. “A few years later, they adopted Lakhbir as well. My biological father and our two brothers stay in a village a few kilometres from here. We rarely visit them.”

Kaur said Lakhbir was a drug addict and an alcoholic. He started using drugs after cross-border smuggling increased. As his addiction became severe, his wife returned to her parents, with their three daughters. Kaur then moved in with Lakhbir as her husband had died a decade ago. Their adopted parents, too, had died by then, and the family gradually slipped into abject poverty. 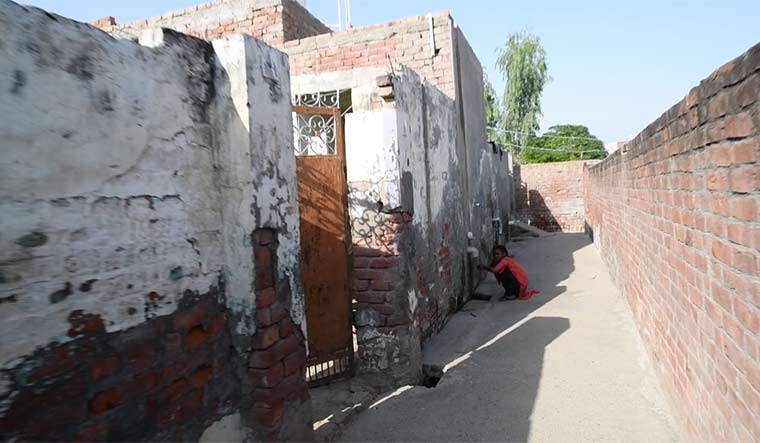 “We supported each other. Sometimes when he earned, he brought home money; sometimes he took money from me. He used to drink and smoke, like most people here do. He loved my daughter, Priyanka. He often brought her chips and candies, her favourite snacks,”said Kaur. “Lakhbir was never a sociable person, he rarely went to meet relatives or hung out with friends, we don’t even have his pictures.”

Lakhbir’s brother-in-law, Sukhchain Singh, said his sister has been living with him for the past six years as Lakhbir had no steady income. “He has not met them for the past several years,”he said. “But what happened to him is wrong. If he had done something wrong, then he should have been handed over to the police. Everything looks fishy. They did not even allow us to hold Sikh prayers after his cremation.”

As sacrilege is a sensitive issue, and with elections around the corner, political parties are treading with caution. Former BJP MP and minister Vijay Sampla, who heads the National Commission for Scheduled Castes, had invited the family to Delhi. “He promised that the CBI would look into the incident,”said Sukhchain. “All four girls (Lakhbir’s daughters and niece) will get free education till graduation. One family member will get a job. We decided that Raj should get it as my sister is a bit hard of hearing. She will receive widow’s pension.”

Leaders of dalit organisations, including Azad Samaj Party’s Chandrashekhar Azad Ravan, visited the family. But the family is being shunned by their neighbours, who are mostly upper caste Jat Sikhs. Some religious leaders even objected to Lakhbir’s last rites being performed according to Sikh rituals, forcing the family to do it hurriedly. Yet, not many people believe that Lakhbir could have done the alleged desecration by himself.

Moreover, there is no clarity about how Lakhbir reached Singhu, which is nearly 450km from Chima Kalan. “Lakhbir was known to be an addict. He could not even go to a nearby city on his own. The matter needs to be investigated,”said Sonu Cheema, the village sarpanch. Two of Harnam Singh’s friends and colleagues, Gurmit Singh and Nirmal Singh, too, said it was hard to believe that Lakhbir was behind the sacrilege.

Gurmit, who retired from the BSF, highlighted the vulnerability of border villages like Chima Kalan. “We have been witnessing smuggling from across the border since our childhood. Earlier it was gold, then weapons, drugs and even cattle. Now there are drops through drones,”he said. With such a long border, interception is not easy. “Smugglers have made huge fortunes, while local addicts readily become carriers,”said a villager.

While the dalit Sikhs, who serve as farmhands, and Jat Sikhs, who are landowners, have always shared a tense relationship, the agitation against the Narendra Modi government’s farm laws brought them together. But the issue of sacrilege is a deeply sensitive one.

Punjab witnessed widespread protests in 2015 when the Guru Granth Sahib—the holy book which is treated by Sikhs as a living guru—was desecrated on multiple occasions. Two protestors lost their lives in police firing back then and the issue turned out to be a major headache for the Akali Dal government and also for the Congress government which replaced it. In July this year, a soldier was lynched on suspicion of desecration inside a gurdwara in Gurdaspur district.

Sikh historian Gurdarshan Singh Dhillon said the Sikhs had earned the nation’s goodwill for their work during the pandemic, but Lakhbir’s murder had become a major blot. “It was wrong. God has given us life, but not the right to take someone’s life. The Sikh worldview is of love. This one act of the Nihangs has brought us discredit,”he said. “What is happening is beyond the comprehension of the Sikhs. At times it appears like a government conspiracy. Look at how a Nihang with several criminal cases was seen with the Union agriculture minister.”Dhillon was referring to a photograph showing Union Minister Narendra Singh Tomar with Nihang leader Baba Aman Singh.

The incident has brought the Nihangs under the scanner once again. A warrior group set up in the 17th century to assist Sikh rulers, defend Sikh territories and protect gurdwaras, the Nihangs still retain many of their age-old beliefs, customs and practices. Although the consumption of cannabis is banned in Sikh religion, the Nihangs use it for a special concoction, which they believe keeps them battle-ready. Their blue attire and massive turbans adorned with symbols of Sikhism have largely remained unchanged.

The Nihangs played a stellar role in fending off attacks by foreign invaders, especially during the rule of Maharaja Ranjit Singh (1780-1839). Their exploits are part of the rich Sikh lore as they defended their faith and the Sikh empire. However, as the Sikhs lost political power, the Nihangs were relegated to the background. They, however, kept their sect alive, adding new recruits and also by maintaining their own gurdwaras and deras.

Two Nihangs, Sarabjit Singh and Narain Singh, have been arrested in connection with Lakhbir’s murder. The Punjab Police and the Haryana Police are involved in the investigation.

Lakhbir’s family, meanwhile, wants speedy justice so that his name could be cleared of the allegation of sacrilege. “My brother will not return. The only thing I hope for is that his name is cleared of this grave charge,”said Kaur. “It is difficult to live with this stain.”