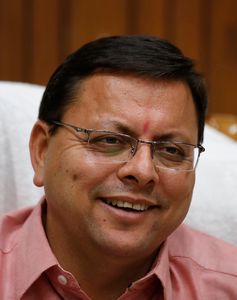 PUSHKAR SINGH DHAMI, who was sworn in as chief minister in July, is the third to occupy the post since the BJP decisively won the elections in 2017. At 46, he is the state’s youngest chief minister.

Q/Did your selection as chief minister come as a surprise?

A/I have been a soldier of the party for a long time. I have been attending programmes since I was 14. In this 30-year-old association, I have shouldered various responsibilities. The only thing surprising [about being selected CM] was that I did not know of it. The BJP is a party where people are neither told nor asked before being given a responsibility.

Q/How does your experience in the party organisation help you as chief minister?

A/Since childhood, we are taught that the country comes first, the organisation second and the individual last. This culture is embedded in us. Whatever circumstances one is in, the goal remains the same. Being part of an organisation has taught me how to adapt.

Q/What are the advantages and disadvantages of being a young chief minister? Has it been difficult for the seniors in the party to accept you?

A/Being young means I have everyone’s affection and blessings.

Q/Despite having such a massive majority, the BJP could not provide a stable government and had to change CMs. How do you explain this to the electorate?

A/That question is not the one that the electorate is asking. Since taking over as chief minister, I have been to 35 constituencies. I see only tremendous enthusiasm among people. Whatever the BJP has been doing, our intent is clear to the people. They understand that only the face has changed, that the government remains the same.

Q/Your guru and Maharashtra Governor Bhagat Singh Koshyari has indicated that he would be returning to the state. How will it impact the party?

A/I have not heard anything of the kind.

Q/Climate change is a challenge worldwide and Uttarakhand is especially vulnerable to it. What new measures will you take to combat it?

A/When I took office, numerous people came to me with bouquets. I told them that if they must give me a gift, they should get small plants. All through the year, we plant trees. This year, we announced the Sundarlal Bahuguna Prakriti Sanrakshan Puraskar (conservation award with a prize money of Rs2 lakh). We have given the nod to e-vehicles with three different kinds of subsidies.

Q/What are the achievements this government can count as its own?

A/We have initiated the filling up of 24,000 government posts and increased the allowances of assistant teachers and grampradhans. For one year, we have waived all fees required to appear in competitive exams; we have also increased the age limit by a year. We have given Rs119 crore for self employment of women. We announced a package of Rs200 crore for those whose livelihoods are associated with the Char Dham yatra, which has been impacted by Covid.

Under the ‘Swasthya Yuva, Swasthya Uttarakhand’ initiative, we are setting up gyms in every village. We have an incentive package for health workers (ASHA, pharmacists, technicians and doctors) who did such good work during the pandemic. We are offering 207 medical tests free of cost in government hospitals. Uttarakhand is the first state to bring critical kidney-related illnesses under the ambit of Ayushman Bharat.

Q/The Char Dham Devasthanam Board (for management of temples and shrines) has been a controversial entity since its formation. Will the government scrap it?

A/A high-level committee is looking into all aspects of it. I am also talking to stakeholders. We will come up with a formula where everyone’s concerns will be addressed.

Q/What is the need to make even more stringent the already strict provisions of the Uttarakhand Freedom of Religion Act?

A/Based on the experience of implementing it in the past two years, we need to make some changes. Conversion is wrong. Why convert people when all religions are the same?

Q/You have been chief minister for just over two months and the opposition is already criticising you for being a khanan priya mukhyamantri (mining-loving chief minister).

A/Earlier, MLAs could give Rs5 crore to the party which was in power and do anything. This government is functioning with complete transparency. Those who live in glass houses should not throw stones at others. If there is a genuine complaint or suggestion, send it in.

Q/Which opponent worries you the most—the Congress or the Aam Aadmi Party?

A/We are not in contest with anyone.