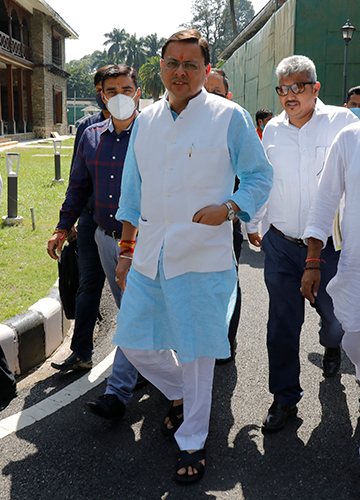 THE POLITICAL upheavals in Uttarakhand have always outstripped the size of the state, and have become only bigger in the year before the state gears up to elect its fifth government.

In July this year, Pushkar Singh Dhami became the third chief minister of the state’s fourth assembly. In 2017, Dhami’s party, the BJP, won an unprecedented majority—56 of the 70 assembly seats—in Uttarakhand. It had 46.51 per cent of the vote share—substantially more than that of its closest rival, the Congress, which got 33.49 per cent. This majority, however, brought no stability in a state where most chief ministers are believed to be jinxed as they do not complete their terms.

Trivendra Singh Rawat, the first chief minister of the fourth assembly, served for four years till he was removed in March 2021. Rawat maintains that he does not know the reason for his removal, but party members say he was unapproachable and that his public image was unimpressive. In came Tirath Singh Rawat, who served four months of gaffes, relied overtly on the bureaucracy and was unable to gain the confidence of the central leadership.

A choice then had to be made of a candidate who was already a member of the assembly, and had an image acceptable to the party leadership. Pushkar Singh Dhami, with his roots in student politics, was this man. He had earlier served as officer on special duty to Bhagat Singh Koshyari (second chief minister of Uttarakhand) and thus knew his way around the bureaucratic tangle of the top post.

The pleasant and affable Dhami has soothed ruffled feathers within the party. One BJP worker described the atmosphere in the party as “very positive” after his appointment.

Dhami, however, bears a mammoth burden. He must undo the perceived failures of the first Rawat and the howlers of the second Rawat. He comes too close to the elections for major course corrections. Then there is the matter of his own image—he is not well known across the state, like say a Harish Rawat (chief minister in the previous Congress government). There are already reports of others vying for his job—among them most notably Anil Baluni, BJP national spokesperson.

Faced by a massive anti-incumbency, the BJP’s strategy will rely on denying tickets, specifically to those with ministerial posts. This will trigger defections. Such desertions have already started what with Yashpal Arya, minister for transport, joining the Congress and claiming that more will follow suit.

In Uttarakhand’s politics this is common. Arya, for instance, was with the Congress earlier.

Ganesh Godiyal, Uttarakhand Pradesh Congress Committee president, said there was massive disenchantment with the state government. Arya’s return to the Congress, Godiyal said, was because of disillusionment with the discriminatory attitude of the Central government towards the state, the three farm laws and the neglect of the rights of the Scheduled Castes.

“The issues of concern in the state are unemployment, price rise, farm laws and the Char Dham Devasthanam Board. The BJP, however, wants to stir up emotional issues. The ill-effects of such issues are long lasting,” he said.

One such emotive issue that the state government is underlining is a further tightening of the provisions of the Uttarakhand Freedom of Religion Act of 2018 (popularly called the love jihad law).

“They have remembered it just before the elections,” Godiyal pointed out.

Since it attained statehood, Uttarakhand’s persistent challenges have remained unchanged. Between its two administrative divisions, Kumaon and Garhwal, both complain of being discriminated against. Districts in the hills battle inaccessibility and high rates of outmigration. Hundreds of habitations are now ‘ghost villages’ as no one stays in them. Its geographical vulnerability offers its biggest developmental challenge. 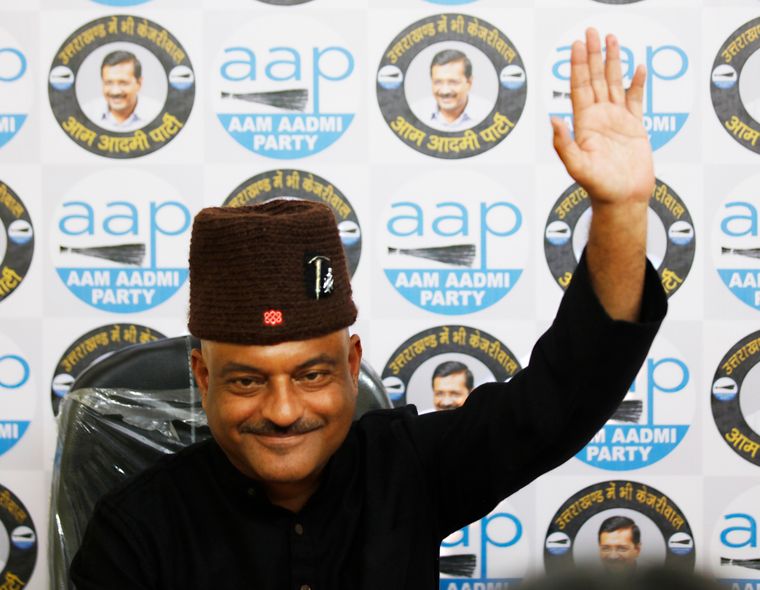 Experts point out that the development of the tourism sector has been ill-imagined and focused on cities such as Nainital and Mussoorie, which are already on the tourist map, while neglecting say the picturesque but comparatively difficult to access Pithoragarh or Chamoli.

Ajay Kothiyal, a retired Army colonel, who is the AAP’s CM face in Uttarakhand, said tourism had been imagined in very limited ways. “We could have disaster tourism, which showcases changes that take place naturally in the Himalayan region,” he said.

Kothiyal is a local hero. He was the principal of the Nehru Institute of Mountaineering when the Kedarnath tragedy struck in June 2013. He oversaw relief and rescue operations, and the rebuilding of Kedarnath. He is also the founder of the not-for-profit Youth Foundation, which since 2015 has guided 10,000 youth to jobs in the armed forces. His campaign is drawing youth and women in droves.

“The issues we are talking about are those that the people have pointed out to us,” he said. This includes 300 units of free electricity.

To those who say that the model adopted by the AAP in governing Delhi cannot be replicated in Uttarakhand, Kothiyal says there is a road map for how it can be done. “Compared with Delhi, Uttarakhand has more money to spend on every individual. If we reduce corruption and improve efficiency, it is possible to give wings to the dreams of the common people,” he said.

Since April 2021, when Kothiyal joined the AAP, he has been relentless in highlighting the government’s failures. For raising the issue of inflated electricity bills (admitted by the government in the assembly) he has been arrested twice.

The AAP machinery has been to 5,000 villages to push its campaigns for electricity and employment. It has also set up isolation centres, equipped with ventilators, in villages in anticipation of a possible third wave of Covid-19.

Whether the state’s people choose a break from the past or more of the same will be known in February 2022.