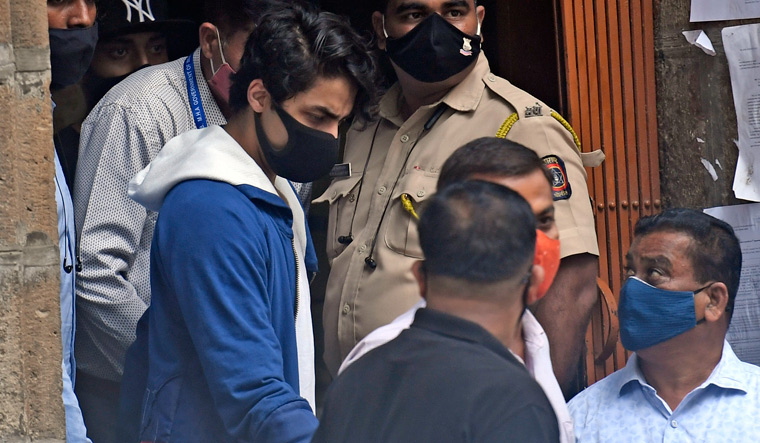 Villain or victim?: Aryan escorted by Narcotics Control Bureau officials for a medical check up in Mumbai | Amey Mansabdar

As the Aryan Khan drugs-on-cruise case drags on in court—a special court in Mumbai heard his bail plea on October 13 and said it would continue the following day—the whole episode has taken on a political hue.

The Narcotics Control Bureau (NCB) had arrested the son of actor Shah Rukh Khan and seven others from a Goa-bound cruise liner on October 2. During the 12-hour raid, the agency recovered a variety of drugs, including ecstasy, cocaine, mephedrone, hydroponic weed and charas, and Rs1.33 lakh in cash.

Although it found no drugs on Aryan’s person, the NCB said he had confessed to consuming drugs, that his WhatsApp chats indicated he was in contact with drug peddlers and that his friend Arbaaz Merchant, who was with him, was carrying 6gm of charas.

Nawab Malik, a senior Nationalist Congress Party minister in the Maharashtra government, said that the entire operation seemed “fake, motivated and one that exposed the BJP-NCB nexus”. He said that the arrest of Aryan was a “well-planned and targeted conspiracy”. He alleged that the NCB had let off three persons, including Rishabh Sachdeva, who is apparently a relative of Maharashtra BJP leader Mohit Kamboj.

After a few days in NCB custody, a magistrate court in Mumbai had sent Aryan and the others to judicial custody for 14 days.

On October 4, when the court first granted the NCB Aryan’s custody, the agency had argued that “regular students may get influenced due to the high-profile persons taking drugs”.

Advocate Satish Maneshinde, who appeared for Aryan, had argued that his client was a special invitee on the cruise ship and that the witness testimony did not indicate anything seized from him except his phone.

Union Minister of State for Social Justice and Empowerment Ramdas Athawale brushed aside Malik’s claims, saying that the anti-drug agency was an independent entity and that its activities had no connection to the BJP.

But Malik was steadfast in his allegations. “For the past one month, information was being circulated to crime reporters that the next target was Shah Rukh Khan. This is nothing but a fake case for publicity. The videos of drugs the NCB shared were made inside the zonal director’s office; no drugs were found on any accused, at least not with Khan.”

He also claimed that BJP ministers from Delhi had told NCB zonal director Sameer Wankhede to let go of Sachdeva, Aamir Furniturewala and Pratik Gaba, who reportedly got Aryan on the cruise. “Once they got him on board, their job was done and they were asked to go,” alleged Malik. Taking a dig at Wankhede, he told THE WEEK: “Those not eligible have been given the post. This is a very senior post and a very junior person has been assigned it.” 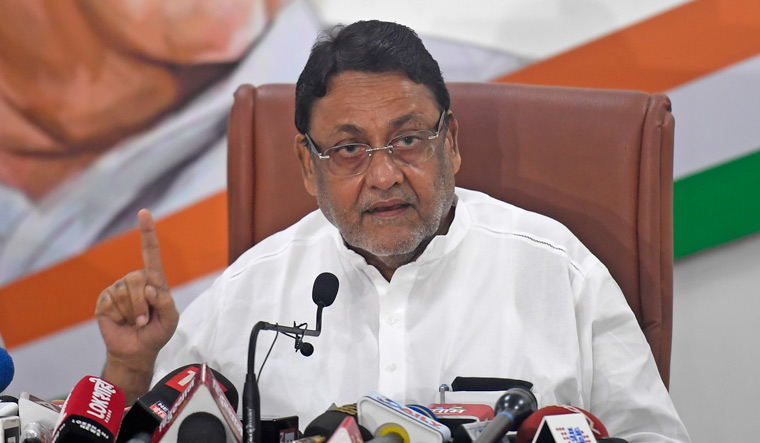 Wankhede, known as Mumbai’s ‘Singham’, has gone all out the organised drug syndicate operating in Mumbai. He told THE WEEK that, from September 2020 to September 2021 alone, 35 to 40 per cent of those in the 18 to 25 age group were caught doing drugs. In the same time period, his office neutralised 12 gangs. “I’m going to go all out to finish the menace of drugs,” he said. “Drugs are a general problem and are everywhere. It is disturbing and traumatising to find youngsters doing drugs. A lot of women are also being caught nowadays, especially those with small children. It is painful.”

The NCB countered Malik’s allegations with a statement saying that it was taking a professional and unbiased approach to tackling the drug menace in the country. “A total of 14 persons were brought to the NCB zonal office for examination,” said NCB Deputy Director General Gyaneshwar Singh. “All of them were served notices, examined thoroughly and their statements were recorded. Thereafter, eight were arrested and remaining six were let off as no incriminating evidence was found against them. All the allegations levelled against NCB are baseless, motivated afterthoughts and prejudiced in nature.”

Earlier, Malik had posted video clips in which he claimed that two civilians, including a man named K.P. Gosavi and a BJP leader Manish Bhanushali were seen bringing in Aryan and Arbaaz Merchant to the NCB office. He asked the NCB and the BJP to clarify in what capacity they were there.

He also claimed that, based on his Facebook profile, Gosavi was a private investigator employed at Sleuths India Detectives, a private detective agency. He was apparently booked for fraud after he reportedly duped a person of 03 lakh on the pretext of getting him a job.

As for Bhanushali, Malik said he was the vice president of a certain BJP wing and he knew top BJP leaders including party president J.P. Nadda, Home Minister Amit Shah and Prime Minister Narendra Modi.

In support of Malik, Maharashtra Congress spokesman Sachin Sawant demanded that the state government, led by the Shiv Sena’s Uddhav Thackeray, conduct an investigation into the alleged links between the NCB and the BJP.

Meanwhile, Shah Rukh Khan’s fans and several Bollywood stars have taken to social media with messages of support. Veteran actor and Congress leader Raj Babbar was the latest, tweeting: “I have known [Shah Rukh Khan] for [too] long to know hardships won’t deter his soul. As the world teaches his young boy through wounds, I am sure the fighter’s son will definitely fight back. Blessings to the young man.”

The 23-year-old junior Khan, who has always seemed reticent and has preferred to stay away from the spotlight, unlike his parents and younger sister Suhana, is currently lodged in the Arthur Road jail in Mumbai.

The spotlight is firmly on him for now.