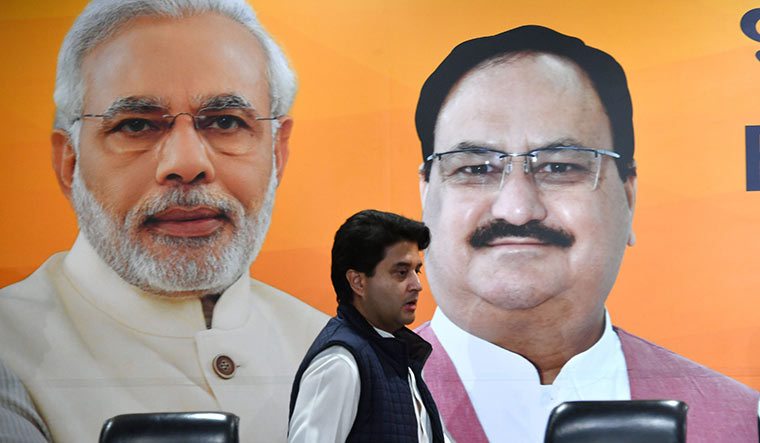 Seat at the high table: With his entry into the BJP’s national executive, Jyotiraditya Scindia’s integration into the saffron ideology is now complete | Arvind Jain

JYOTIRADITYA SCINDIA waited for more than a year after quitting the Congress and joining the BJP, before he was made Union minister. It took another four months for him to gain entry into the party’s ideological high table. On October 7, he was made a member of the BJP’s core deliberative body, the national executive, thereby completing his integration into the saffron ideology.

The BJP’s national executive had long been the preserve of those who had risen through the party ranks after gaining a good grounding in the RSS philosophy. The composition of the BJP’s new national executive—comprising 80 regular members, 179 permanent invitees and 50 special invitees—shows that the situation has changed. The doors to the high table are now open for new converts. Ideological purity is no longer the all-important criteria; party membership would suffice.

A. Namassivayam, Puducherry minister and former Congress president in the Union territory, is the newest BJP member to make it to the national executive. He had joined the party this January. Namassivayam’s inclusion shows that the BJP is pinning its Puducherry hopes on him.

The new national executive has new faces, relatively younger leaders and broad representation of various castes and communities. The larger message is one that of inclusion, allowing lateral entry of leaders from organisationally uncharted territories, and raising a new rung of leaders.

Apart from Scindia, national executive members who do not have RSS or BJP roots include Union Ministers S. Jaishankar, Ashwini Vaishnaw and Hardeep Puri. Vaishnaw’s rise has been dramatic. Within two years of being handpicked for the Rajya Sabha by Prime Minister Narendra Modi and Union Home Minister Amit Shah, the former IAS officer has been entrusted with key portfolios such as railways and information technology. Before he was inducted into the national executive, Vaishnaw was in charge of a bypoll in Dadra and Nagar Haveli.

The BJP strategy of poaching leaders from other parties has paid rich electoral dividends. By drafting many of these leaders into the national executive, they would now become “ideologically closer” to the party, say sources. There is, however, concern—especially in the RSS and among veterans—that this could lead to dilution of the party’s core values.

Seshadri Chari, former editor of the RSS mouthpiece Organiser, had in the past spoken about discontent among workers over the inclusion of too many outsiders into the party fold. Chari, however, said the reconstitution of the national executive was a good sign.

“As a party, the BJP has to include new people,” he said. “That doesn’t mean that old people have been discarded. The old-timers are there in one form or the other. The national executive needs new members. There is nothing wrong in including people who are from other parties as long as they accept the BJP’s core principles.”

But the entry of too many outsiders into BJP fold may not always be welcome, he added. “It is a fact that somebody or the other will be unhappy within the party,” he said. “The party does not change its core principles even if they accept someone from the Congress or elsewhere. But the BJP has to see if these new entrants are useful.”

West Bengal holds a lesson. Ahead of the assembly polls in the state, the BJP had witnessed a huge influx of leaders from the Trinamool and other parties. But when the results came and the BJP was defeated, most of them returned to the Trinamool.

BJP spokesperson R.P. Singh said that changes in the national executive were part of the party’s expansion plans. “Even if such people (with non-BJP and non-RSS backgrounds) constitute 10 per cent of the party, it would not be an issue,” he said. “There have always been lateral entries at the organisation level. [The new members] are assimilated into the party and they work for it. Take Baijayant Panda. He came from the Biju Janata Dal. He was made party vice-president and was in charge of Assam and Delhi. He is doing well.”