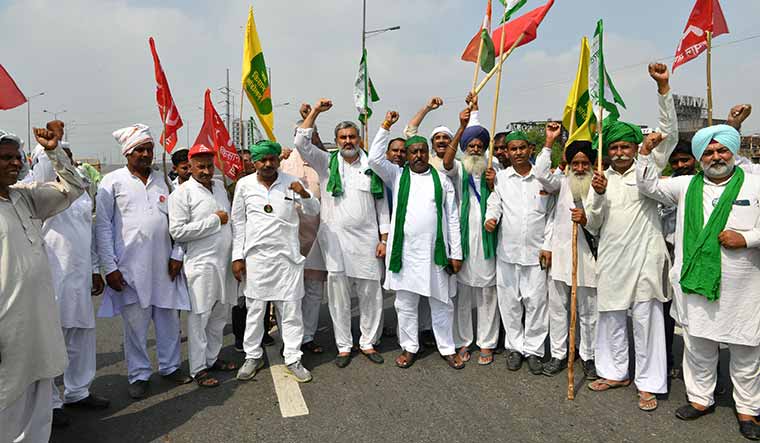 Green fury: Farmers from Punjab and Uttar Pradesh blocking the national highway to Delhi near the Ghazipur border on September 27 | Arvind Jain

In 2011, Anna Hazare’s anti-corruption movement captured the public’s imagination, forcing political parties to not just support the cause but align with its politics as well. The movement’s key leaders—Arvind Kejriwal, Prashant Bhushan and Yogendra Yadav—did not want it to lose steam and be swallowed by political parties. So, they floated their own outfit, the Aam Aadmi Party, on November 26, 2012.

Political parties born of mass movements have had mixed results in India. Asom Gana Parishad, which had its origins in the agitation against illegal migrants, went to form government in Assam before its stock diminished. A new political outfit in the state, born of the protests against the Citizenship (Amendment) Act, could barely register its presence in the assembly polls held early this year.

Now, as the country prepares for the next round of assembly elections due early next year, leaders of the ongoing farm protests are feeling the heat. Constituents and supporters alike are asking them a question: whether to actively influence the elections or not.

Farmers are a politically influential group in at least three of five states where elections are due. As the pivot of the agitation, Punjab is likely to feel the farmer sentiment the most. Uttar Pradesh and Uttarakhand, where the BJP is in power, are also likely to feel it to some extent.

Farmer unions have launched a mission in UP and Uttarakhand to defeat the ruling party. But in Punjab, where the Congress is in power, there is no such mission. In a clear exercise of its clout, the Samyukta Kisan Morcha, an umbrella body of 32 farmer organisations, called a meeting of all constituents in Chandigarh on September 10 and asked all political parties in the state to desist from campaigning till the Election Commission officially announced the polls. Most parties agreed to it, albeit grudgingly.

“People are emotionally attached to the movement,” said Balbir Singh Rajewal, chief of the Bhartiya Kisan Union (Rajewal). “All discussions in villages revolve around the agitation. It is surprising that many political parties started their campaign several months ahead of the elections. This disturbs people. The political campaign tries to wean them away in different directions. It can change Punjab from continuing as the pivot of this movement. So, we told political parties not to hold rallies.”

Rajewal has 50 years of experience of working for farmers, and his ideological heft has made him the first among equals in the Morcha. According to him, the Morcha wants to stay apolitical. Said Jagmohan Singh, general secretary BKU (Dakaunda): “One thing is clear: all farmers cannot fight the elections jointly. According to our constitution, if anyone wants to contest elections, or support anyone in any election above the block level, that person has to resign. Some organisations want to boycott all parties, while others are keeping quiet. Some organisations had, in the past, openly supported the Shiromani Akali Dal and the Aam Aadmi Party.” 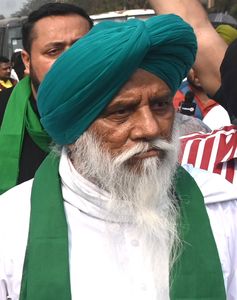 A huge farmers’ rally in Muzaffarnagar, Uttar Pradesh, last month has made the BJP wary. In 2013, a mahapanchayat of farmers in the region was followed by communal riots, which resulted in the BJP-led National Democratic Alliance winning 73 of 80 Lok Sabha seats in the state the following year. This time, though, Muzaffarnagar’s Jat farmer leader Rakesh Tikait has given a call for Hindu-Muslim unity. The farmer unions in the state have also formed their own umbrella body and are holding rallies.

In Punjab, at least one BKU leader, Gurnam Singh Charuni, seems to have plans to enter politics. Charuni had in July given a call for “Mission Punjab”, telling farmers to contest elections; the Morcha responded by immediately suspending him. Chastised, he said he would not contest elections, and even rebuffed a businessman who wanted him to lead a political party and become chief minister. But Charuni has been touring Punjab and Haryana asking people to reject mainstream parties and field their own leaders.

“It is not just a farmers’ movement; it’s a dharmayudh,” said Charuni. “In Uttar Pradesh, there are eight crore farmers. The state government was formed after [the ruling party] won 3.5 crore votes. In Punjab, there are 90 lakh farmers, and the party that won last time got 59 lakh votes. Farmers can change the political system. What has been happening in Punjab till now is that a person with money becomes a candidate and wins elections. What I am saying is that the voter should contest. Once you get power, you can reject the farm laws and force out corporates.”

But other leaders point out that Charuni does not have a base in Punjab, as he is from Haryana. “Charuni was my acolyte,” said Rajewal. “His rallies are not drawing big crowds. He wants to toe a separate line, but the Morcha will be apolitical as our goal is the repeal of farm laws.”

The situation in Punjab has echoes of what had happened in Delhi after the Hazare agitation. As Delhi chief minister, Sheila Dikshit had to bear the brunt of the anti-government sentiment. The Congress high command appeared to withdraw its support to her, and Kejriwal and the AAP defeated her in the ensuing assembly polls.

Similarly, in Punjab, Amarinder Singh has had to step down as chief minister because of internal bickering in the Congress as well as the growing anti-incumbency, partly fuelled by the farmer agitation. The difference is in that the unions may not be able to oppose the new chief minister, Charanjit Singh Channi, as strongly as the AAP had done in Delhi.

The AAP fancies its chances in this politically fluid situation in Punjab. It is likely to field farmer leaders to contest the polls. Interestingly, in the 2014 Lok Sabha elections, the party had fielded Charuni’s wife in Kurukshetra. Rajewal’s union had also supported it in the previous assembly polls. But the AAP would still need a credible chief minister candidate to build on favourable conditions.

The farmer agitation, meanwhile, has completed one year. According to Rajewal, the resolution is bound to happen soon. “I am fully confident of it,” he said. “The lacunas in the law have been explained to the government, and the government itself agreed [that the lacunas existed]. It is just that the government wants an honourable exit. It’s their rajhath (royal obstinacy).”

But has the movement achieved anything concrete so far? “Before the Morcha, the slogan was Modi hai toh mumkin hai (If it’s Modi, it’s possible). This agitation has broken the myth of his invincibility. He, too, can be challenged. This has given courage to many people across the country. The awareness of it has grown manifold,” said Rajewal.

The Union government has not shown any sign of relenting, though. But the Morcha remains resolute. “We are steadfast, as Punjab had shown during the time of the Mughals and the British,” he said. “Any leader who leaves the Morcha will be defeated in Punjab. They will lose face.”

Said Jagmohan Singh: “The kind of response we have got during the agitation, it is our duty to give everything for this movement. If we do not get an honourable agreement, we do not have a moral right to return to our villages.”