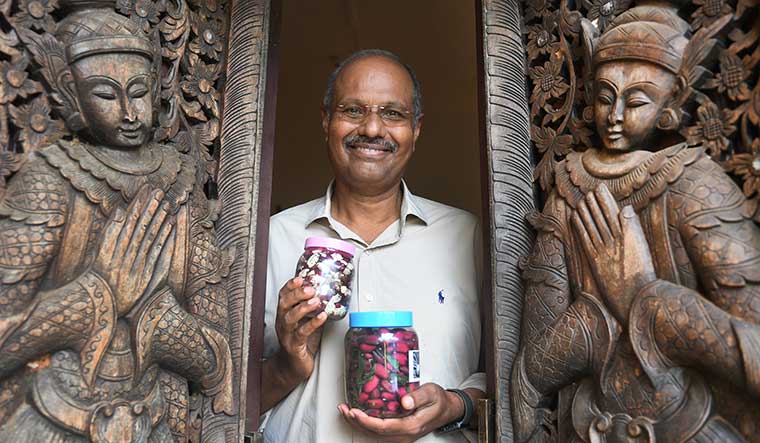 Preserving past: Prabhakar Rao on his farm at Taralu Village on the outskirts of Bengaluru | Bhanu Prakash Chandra

A STROLL AROUND a monument can transport you to a bygone era. As the history and our common heritage sinks in, the aesthetics and, often, the greenery, help to make your visit an experience to cherish. Behind the design of these landscapes are meticulous minds like that of Prabhakar Rao, 60. He is the landscape architect for the tree scheme of the Central Vista project.

Rao—who refused to talk about the Central Vista project, citing a confidentiality clause—worked in Dubai for several years before shifting to India in 2011. He has worked on many iconic projects, including the Statue of Unity. He was recently invited to join the Qutb Shahi tombs restoration project being carried out in Hyderabad by the Archaeological Survey of India and the Aga Khan Cultural Trust.

But, the Bengalurean is perhaps better known for his interest in preserving seeds. He is, in fact, called “the seed saver”. His passion for Vedic agriculture has energised the Beej Raksha movement, which works with urban gardeners and 22 lakh farmers across India to preserve the rich gene pool of heirloom seeds and promote indigenous varieties of vegetables, pulses and cereals.

Rao was mentored by scientists M.S. Swaminathan and M.V. Rao, who were among the architects of India’s Green Revolution. Among other things, the revolution also used chemical fertilisers and pesticides. But, Rao now advocates chemical-free farming.

“While the Green Revolution was a success considering its objectives, I had serious misgivings about the sustainability of what we were doing,” he said. “I changed my line of study and pursued landscape architecture. [When] I came back to Bengaluru, [I] started working on my farm on Kanakapura Road. I started promoting indigenous seeds and practised chemical-free farming and Vedic agriculture.” Rao, who has a doctorate in plant breeding and genetics, admits that it is the antithesis of what he propagated during the early years of his career.

He was prompted to embrace natural farming because of soil degradation, loss of biodiversity, and land, water and air pollution. Most importantly, he was worried about the waning self-reliance among farmers. “Today, all seeds sold in the market are either hybrid or genetically modified,” he said. “Earlier, a farmer could make seeds from indigenous or native seeds which are open-pollinated. But the local seeds are no longer available in the market as the seed-keeping culture is fading. This means the farmer is forced to buy seeds every season.” He added that more than 99 per cent of biodiversity in vegetables is already lost. “We need to preserve what is left,” he said.

“I look for indigenous seeds which are on the verge of extinction, procure them and try to stabilise them genetically and environmentally in my farm,” he said. “I share them with the seed-saver community as the idea is not to create a seed vault. I am keener on multiplying the seeds, to grow these rare vegetables and create a demand for them so that farmers can take the risk of growing them at scale.” 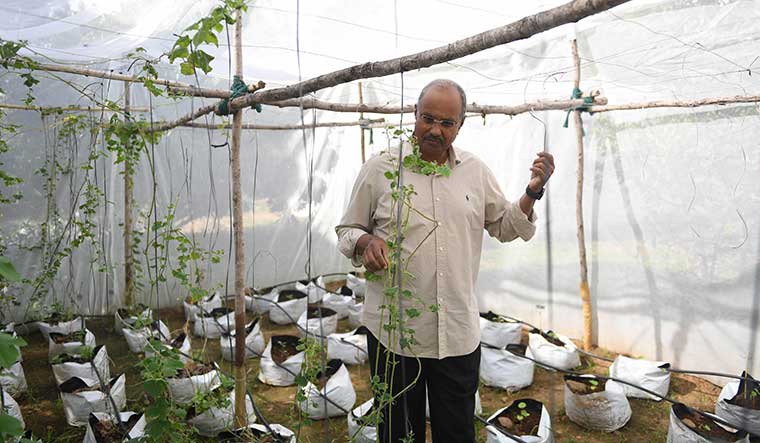 Rao, who has a collection of 600 varieties of endangered, indigenous, vegetable seeds, has been successful in stabilising around 180 to 200 varieties. They are now available online for purchase. “This is one way of saving these seeds from going extinct,” said Rao, adding that stabilisation is a time-consuming process.

It is a tough task to convince a farmer to part with heirloom seeds. “Mostly, I get only a few seeds of the rare varieties from tribal communities or farmers,” he said. “Of these, some will germinate. The plants grown from these seeds should resemble the mother plant. So, we grow the seed over five to six seasons to ensure that the plant is the same as the mother plant. There is always a chance of cross-pollination. Every season, we harvest the seeds from plants that resemble the mother plant to concentrate that particular set of genes. Then, we release it as a native seed. This follows the standard procedures and genetics of seed production.” Rao uses traditional storage methods like keeping the dried seeds in an airtight box with a pinch of asafoetida and two stalks of neem leaves.

Preserving indigenous seeds is not a hobby, Rao asserted, but a mission. The native seeds are climate-resilient and drought-proof. They can combat oscillations of climate change. Losing these varieties will not only lead to permanent loss of the gene pool but also deprive us of vegetables with high nutritional value. “Hybrids and GMO seeds are bred in ideal conditions and are chosen for their ability to absorb nitrogen and commercial fertilisers to give higher yield,” said Rao. “But, in suboptimal conditions, their performance is inferior to native needs.”

Rao added that the loss of indigenous varieties also meant losing diversity in our food habits, the regional cuisines and healthy eating practices in tune with the seasons. Rao said that most recipes in Samaithu Paar—a treasure trove of traditional vegetarian recipes by S. Meenakshi Ammal, first published in 1951—can no longer be made as the vegetables mentioned are not grown in south India.

“For instance, clove bean was widely being consumed in south India,” he said. “But one cannot find them in the local market any more. We sourced the seeds from the tribals along the Karnataka and Tamil Nadu border and are reviving the vegetable.” The supermarket culture, he said, has changed our food habits as seasonal crops are available throughout the year and the same set of popular vegetables are being consumed across different geographical regions. This is tweaking food habits, perhaps, making them uniform, he said.

Rao said that during monsoon, some rural communities continue to harvest certain leafy vegetables that are labelled as weeds in commercial agriculture. These were an intrinsic part of our diet that helped build immunity against seasonal endemics. Similarly, tribals in Aurangabad, Maharashtra, strictly follow the seasonal vegetable calendar, where they eat only specific vegetables in each Hindu month. For instance, they consume the cucumber family of vegetables only in February, March and April.

One simple strategy to preserve indigenous varieties is encouraging farmers to grow field crops, in which the volumes and returns are bigger. One such revival project happened in Punjab. A wheat variety called Sona Moti, which was on the verge of extinction after being in cultivation for 2,000 years, was grown. Rao said it has a good amount of folic acid and can be consumed even by people with gluten allergy and has now been revived. “The farmers have been selling it for 075/kg against a minimum support price of Rs20 and have been making profits for the last two harvests,” he said.

“In Chhattisgarh, farmers are growing native varieties of pigeon pea (dal),” he added. “There is a huge demand as it cooks well, tastes good and is more nutritious than the hybrid dal. The black rice variety in the temple town of Kumbakonam in Tamil Nadu is another success story.” Farmers in Chhattisgarh are also growing a flood-resistant rice variety—the plant grows taller than usual to escape floods. India is a biodiversity hotspot for pulses and has 35,000 indigenous rice varieties, too. If there is no intervention, they are at a risk of extinction.

Rao, who is a part of the Paramparaagat Krishi Vikas Yojana, a government scheme to revive traditional methods of agriculture, emphasises on the need for a paradigm shift in agriculture—from ensuring food security to nutritional security. There is a huge burden of nutritional deficiency even among the affluent. As a result, the food supplement industry is thriving, said Rao.

He propagates practices based on Vriksha Ayurveda, an ancient compilation of scholarly commentaries. Rao said that a tradition that has survived 10,000 years in India uses nutrient solubilising microbes (NSMs) to break down the minerals like nitrogen, phosphorus and potassium. There are formulations which can introduce NSMs into the soil.

“Vedic agriculture protects the ecosystem and biodiversity, even as you grow crops to fulfil nutritional requirements,” he said. For instance, a person who normally eats five chapatis made of hybrid wheat will need to eat only two chapatis made of Sona Moti, he said. The body gets adequate nutrition and signals you to stop eating.

Despite his level of involvement in agricultural science, the landscape architect in Rao still has an appetite for challenges. He loves to talk about the Statue of Unity, which he calls an iconic monument for the vision with which it was implemented. “There were concerns over threats to the crocodile population, tribal habitations and biodiversity,” he said. “But today, you can see the transformation, which is in sync with tribal livelihood.” Rao added that you could spot a huge population of dragonflies in the area and that this was an indicator of the ecosystem’s health.

Rao said that for historical and cultural landscaping in restoration projects, getting into the skin of the original designer is important. “Often you realise the original design has been diluted, though not intentionally, but because people did not know any better,” he said. “There is a tendency to plant trees indiscriminately or for exotic trees to be introduced. So, we need to record the changes and the extent of deviation from the original design.”

It pays to be a futurist while designing landscapes, said Rao. “I always envisage a design thinking how this landscape would look in 50 years,” he said. “Many trees will be reaching the end of their life cycle, too. So, we have to understand how we are going to tackle the current gaps and the gaps that will be created over the years. You must evolve a strategy where, over a period of time, you learn to reveal the layers of the original design.”

Rao said indigenous trees are the most vibrant; there is also a wide variety in trees, shrubs and ground covers. “We don’t need to imitate the western concept of manicured lawns and hedges,” he said. “Every indigenous plant has a descriptor in Charaka Samhita (ancient Indian text on medicine), as every tree brings value to human life. You cannot say the same about a Gulmohar or other imported trees.” He added that trees like the Gulmohar tended to collapse during the monsoon.

Native trees, like the kadamba, he said, have beautiful flowers, thick canopies, versatile timber and medicinal value. He added that our horticulture system follows a flawed approach and promotes exotic species. He wants to see native trees lining our streets. In Malleswaram, a suburb of Bengaluru, he said, we have the Margosa Road named after the indigenous trees lining the street. Rao asked: “Why can’t we have more neem, margosa, kadamba or arjuna for our avenues?”