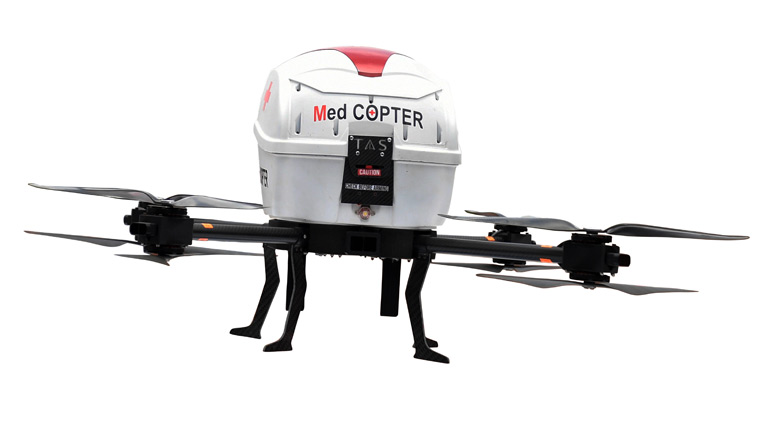 Your food is in the air! In the not so distant future, this could be Swiggy’s notification to customers. In May, the ministry of civil aviation cleared 20 entities to conduct experimental beyond-visual-line-of-sight (BVLOS) drone flights. The online delivery platform is part of a consortium, led by ANRA Technologies, which is among the 20. “We are excited about the potential of drones and look forward to BVLOS trials for food delivery,” said Shilpa Gnaneshwar, principal programme manager at Swiggy.

Commercial drones, initially perceived as little more than toys, are now being used by businesses in an attempt to increase efficiency and decrease costs. According to a report by the Federation of Indian Chambers of Commerce and Industry and EY, the unmanned aerial vehicle (UAV) market in India is expected to touch $885.7 million in 2021, with the global market approaching $21.47 billion. A report by PwC India said that the drone segment was expected to grow at a compound annual growth rate of 18 per cent between 2017 and 2023.

However, experts point out that India is at least 10 to 15 years behind the US and China in drone utilisation. China is the world leader in drone hardware, while the US has shown the most innovation in creating new applications. According to a report by Statista Research Department, from the 2017 fiscal year to the 2021 fiscal year, the US spent about $17.5 billion on drones. This was the highest expenditure on drones by a country and was followed by China ($4.5 billion) and Russia ($3.9 billion). During the same time period, India is estimated to have spent $2.5 billion on drones.

Swapnik Jakkampuddi, co-founder and COO, Skye Air Mobility, said: “Certain nations such as the US, Scotland, Australia, Japan and [some countries in] Africa are ahead in some aspects of drone use for civilian population, but that is attributed to their unique geography (distances, inaccessibility to services in specific regions, and security and risk assessment specific to geopolitical environment enables faster adoption of drone friendly laws).” He said that delivery of vaccines and food has commenced in select regions of such nations.

In India, drones are used most widely in aerial photography. It took off soon after the first consumer drones became available in the Indian market in 2015 and drones have now become a staple of the toolkit of wedding photographers.

Nowadays, drones are not just used to get the aerial view, but also for more creative inputs, such as to carry rings and to create light and sound shows in the night sky. Road survey teams and real estate businesses, too, use drones. Entire businesses have emerged solely for processing drone footage and turning it into actionable insights, such as identifying landmarks or generating 3D models of buildings under construction. Then, there are the more industrially driven purposes such as stockpile evaluation. 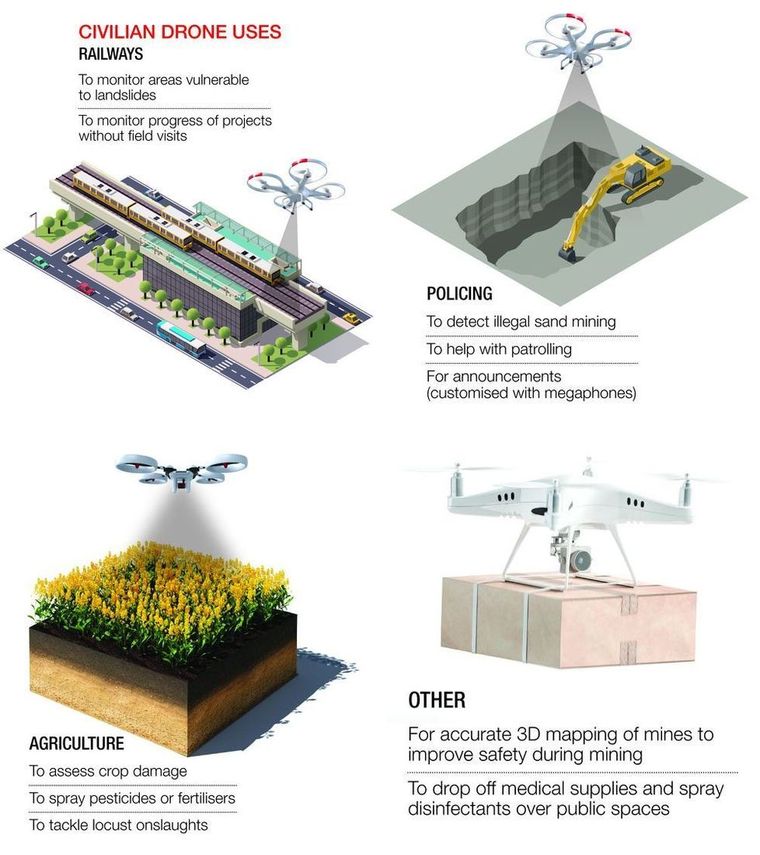 “In the past two to three years, the usage of drones in agriculture has also increased,” said Abhinav Rao Varrey, associate, business development and communications at Johnnette Technologies Limited, a drone manufacturer. He added that one of the first deliveries using drones was recently done in Bengaluru. Varrey said that drone deliveries in India were more likely to focus on medicines or vaccines rather than food or other packages.

The use of drones by the government’s SVAMITVA (Survey of Villages Abadi and Mapping with Improvised Technology in Village Areas) scheme, the National Highways Authority of India, Indian Railways, police forces and state governments, in various projects, highlights an intent to leverage this technology. The purposes of these projects range from enhancing safety to reducing field visits (see graphics). The number of tenders being issued for drones and drone services has been increasing steadily.

Omnipresent Robot Tech got permission to start trial deliveries of products purchased online and has already tested drone deliveries of medicines to the All India Institute of Medical Sciences, Delhi. Its CEO and founder, Aakash Sinha, said the e-commerce sector would see huge usage of drones. “In India, there are more than one crore deliveries every day,” said Sinha. “The delivery segment is going to benefit immensely from drone deliveries. Asset management for factories and construction projects will also benefit from drone usage. Oil refineries, for instance, have tall structures that require regular maintenance. Usually, someone has to get up there; it is not only risky, but also depends on human input. So, in the future, every factory will have a drone.”

Karan Kamdar, CEO of drone manufacturer 1 Martian Way Industries Pvt Ltd, said that drones would become an integral part of the smart home. “Autonomous smart devices will be used as a remote eye for security,” he said. “[Similar] drones are already available in the market, but with the rapid pace of Artificial Intelligence development, and facial recognition and other such technologies, the autonomy and sophistication of these drones will increase by orders of magnitude. As will their integration and communication with other smart devices.” Moreover, he added, with the ability to manipulate objects, one can think of a host of creative applications performed by drones, such as picking up smartphones and plugging them into their charging ports.

One of the key applications that drone manufacturers in India are working on is their operation in spaces without GPS. Such operations can keep track of inventory in warehouses or, if fitted with the required sensors, monitor hazardous spaces inside factories. “These applications are yet to be considered by the directorate general of civil aviation because the rules currently have no provision to account for drones that work autonomously in the absence of GPS and NPNT (‘no permission; no take off’ protocol),” said Kamdar. “NPNT requires the drones to have an on-board GPS. Similarly, drone racing, which has become a global phenomenon, makes use of drones that cannot have GPS mounted on them. So again, they cannot operate if NPNT becomes an exclusive requirement without regarding the end utility of drones manufactured for different purposes.” Jakkampuddi said that areas like medical assists and scans, mining solutions, marine applications and exploration without human presence could use drones more.

The government’s Drone Rules 2021 has been largely welcomed by the industry. There were apprehensions that the rules may be made stringent after the drone attacks in Jammu in June. However, there have been relaxations which would speed up the adoption of drones. For example, the number of forms that had to be filled has been reduced from 25 to five and the fee to be paid to operate drones has been reduced from Rs70 to Rs4. The rules are expected to make India a $5 billion-plus drone market in the next three years.

As per the Drone Rules, a single-window platform would be developed for all the clearances that are required. Additionally, an interactive airspace map will be displayed on the platform showing yellow, green and red zones. These zones have been demarcated to tell drone operators where they can and cannot fly. The coverage of the rules has been extended to drones weighing up to 500kg, from the earlier 300kg. This would mean that drone taxis would also be covered by the new rules.

“The new rules have abolished the requirement of several approvals which were earlier required,” said Abhishek Malhotra, managing partner, TMT Law Practice. “There is no need to seek certificate of conformance, certificate of maintenance, import clearance, acceptance of existing drones, operator permit, authorisation of R&D organisation and student remote pilot licence. [This] should enable growth in business and private participation.”

Shivangi Tyagi, a research analyst with the political economy programme at Carnegie India, also said the new laws were significantly less burdensome than the old rules. “The new rules have made compliance easier,” she said. “It is important to note that the government had already been using drones for different operations. The new rules are a part of an ecosystem that is likely to boost drone usage in the private sector.”

Experts feel that while there may be apprehensions about the possibility of more drone attacks, this does not overshadow the immense potential of the technology to solve problems. “In our assessment, we see the government taking steps to adopt more anti-drone technologies that will safeguard vital national assets,” said Jakkampuddi. “Strict action against violators and anti-national elements by enforcement agencies is the need of the hour, so as to dissuade any persons with mala fide intent.”