It is important to identify Rohingyas and send them back 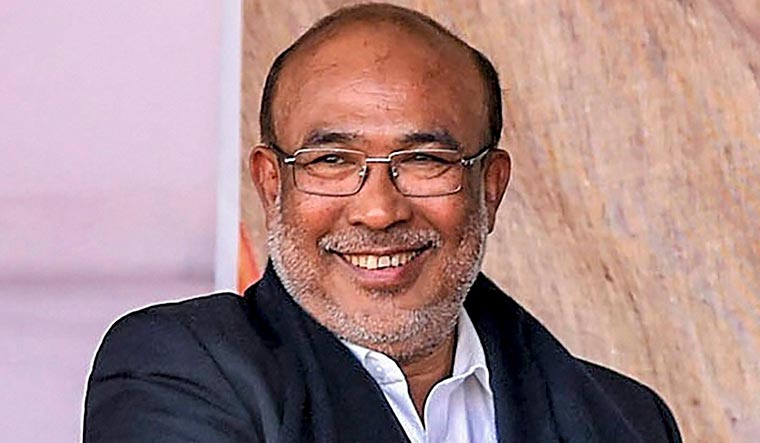 AFTER FOUR AND a half years of trials and tribulations, N. Biren Singh seems to have emerged confident and assertive. The Manipur chief minister, who has been leading a coalition government, wants a majority for the BJP on its own in the next elections, and he is confident that the people of Manipur would grant his wish. He said the Inner Line Permit, brought in by the BJP in four northeast states to safeguard the rights of the indigenous people, had allayed the concerns over the implementation of the Citizenship Amendment Act.

However, Singh faces many challenges. There is trouble on the international border with Myanmar, where there is an influx of refugees. Currently, there are around 6,000 refugees, many of them Rohingyas, in the state. Singh has asked the Centre to stop the Free Movement Regime on the India-Myanmar border. “We have to do a door-to-door survey to identify Rohingyas and send them back,” he said.

Q/ The BJP-led coalition government in Manipur faced a lot of troubles. What are the plans ahead of the 2022 assembly elections?

A/ When we formed the government in 2017, our numbers were less [than required]. The coalition government was formed and we managed somehow. It is natural to have some tussles in a coalition but we overcame them in the last four and a half years. In the coming elections, it depends on the wisdom of the central leaders. But, as far as the present situation is concerned, I believe the BJP can fight alone. A decision will be taken by the central leadership.

Q/ How many seats do you expect for the BJP?

A/ Out of 60 assembly seats, though I cannot pinpoint an exact number, 40 or 45. But I am sure the BJP will get an absolute majority.

Q/ Six MLAs have been disqualified under the anti-defection law.

Q/ The office of profit case in the Supreme Court is another challenge before your government?

A/ The matter regarding (the appointment of) 12 BJP MLAs parliamentary secretaries is pending in the Supreme Court. The matter will come up for hearing on August 28. It is a Constitutional procedure. Since the case is in the Supreme Court, I do not want to comment. But a similar case was there against Congress president Sonia Gandhi, but she was not disqualified. In my opinion, we have a similarity with the Sonia Gandhi case and there is a precedent.

Q/ Can their disqualification impact the stability of your government?

A/ I think we have enough numbers for a majority and no problem will be there.

A/ The slogan of Congress-mukt Bharat is coming true and a former Congress state president joining the BJP is a great achievement for the BJP. It clearly shows the confidence the people have in the BJP. Not only the people but also the opposition leaders are showing confidence in the BJP.

Q/ Don’t you think an early solution to the Naga issue is the need of the hour?

A/ It is a long process and as a state government we want to be apprised of any developments impacting our state. The talks are being held between the Central government and the NSCN(IM). We were asked to share our opinion. Unofficially, we have been consulted on the matter and we have expressed our stand to the Central government. We welcome an amicable solution. But, at the same time, we welcome a peaceful solution without affecting the state of Manipur.

Q/ Is a final settlement to the Naga insurgency likely soon?

A/ We hope there is a solution at the earliest. But definitely, whatever decision is taken will be without affecting anything in Manipur.

Q/ What are your concerns about the activities of insurgent groups in Manipur?

A/ In the last four years, there has been a drastic decline in insurgency related violence in the state. Some insurgents have surrendered, others have been captured and no unwanted incident has taken place. Some incidents involving the Suspension of Operations (SoO) groups and illegal activities by NSCN(IM) groups have taken place and these cases have been handed over to the National Investigation Agency. But the law and order is far better in the state than in previous years.

Q/ There are concerns about journalists being booked for sedition and under the National Security Act?

A/ Following the Supreme Court directions, we released some of them. But as per the Criminal Procedure Code (CrPC), a chargesheet has been submitted against them and the trial will begin. Even within Article 19(2) of the Constitution, there is a provision to maintain decency, morality and public order through reasonable restrictions. So, the Constitution has given us certain provisions and we have used it. We will not allow them to escape easily and fight the case legally since some of those booked under these laws are habitual offenders.

Q/ Do you think the sedition law is needed?

A/ Laws like sedition are needed sometimes to prevent flaring up of communal tension and maintaining public order. If the Constitution does not allow NSA or sedition, then we need some other act to control this kind of inflammatory news and speeches.

Q/ Manipur was brought under the Inner Line Permit regime after anti CAA protests. How is it helping the state?

A/ After providing ILP, we are able to convince the people that the Central government has made provisions to protect the indigenous rights of people and the CAA will not impact the state in a negative way. Earlier, ILP was in force in Mizoram, Nagaland, Arunachal Pradesh and now it is in force in Manipur. It does not prevent tourists from coming in. We have opened up counters in Manipur Bhawan and passes are being issued at the airport. It is only due to Covid that tourism is affected; otherwise, there is an influx of visitors and tourists.

Q/ How are you dealing with the influx of refugees from Myanmar?

A/ That has become a big concern for us. Since it comes under the Foreigners Act, I have raised the issue of the influx of Myanmarese and Rohingyas with the Central government. I have requested the Centre to stop the Free Movement Regime that allows people living within 16km of Manipur-Myanmar border to travel back and forth. Since they belong to the same community, it is very difficult to identify them. Stopping their free movement can prevent the Myanmarese, foreigners and Rohingyas from entering illegally.

Q/ Is the Centre inclined to stop the Free Movement Regime?

A/ I think seeing the ground reality and practically analysing the situation, the Central government will review the situation. It has to be a permanent solution. The border fencing is already underway. The 398km Manipur-Myanmar border is very long. In the 100km area that is most vulnerable, 40km border fencing has been sanctioned by the Centre. Only when that is completed, we can check the influx of immigrants. Stopping the Free Movement Regime has to be a permanent solution that will not only stop illegal migration but also check smuggling of drugs, weapons and other illegal items.

Q/ What will replace the Free Movement Regime?

A/ There will be the opening of a gate and issuing of passes for people to move across. We should have the mechanism to identify who is coming and going on the international border.

Q/ How big a concern are the Rohingyas in Manipur?

A/ We had arrested 70-80 Rohingyas, which was unexpected and has highlighted the gravity of the problem. At the moment, we are not looking inside villages, but we need to carry out a house-to-house verification. It is important to identify them and send them back.

Q/ If Myanmar does not want them back, what is the option?

A/ That is an international issue. But we cannot keep them in Manipur.

Q/ If there is peaceful coexistence between the people of hill and valley, should Article 371(C) continue in Manipur?

A/ It is a Parliamentary Act passed in 1971-72. As of now, it is protecting the hill people. But today, all the people of hill and valley are coming together and there are no divisions. Everyone is joining hands for the development of Manipur.

Q/ How do you see the BJP’s focus on the northeast?

A/ It is for the first time in the political history of India that five ministries in the Central government have been given to leaders from the northeast—one from Arunachal, two from Assam, one from Manipur and one from Tripura. Two are cabinet ministers—Kiren Rijiju for law and justice, and Sarbananda Sonowal for shipping. Both are big portfolios. So, it reflects the confidence and care of the BJP government towards people of the northeast.