My abduction was outsourced by Indian agencies to an English company 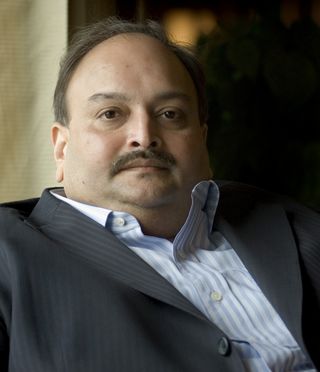 Fugitive diamantaire Mehul Choksi is accused by Indian law enforcement agencies of defrauding Punjab National Bank. The government of India is pursuing his extradition from Antigua, where he has been a citizen since 2017. He mysteriously disappeared from Antigua this May, only to be found a few days later in Dominica, also an island in the Caribbean. He was in custody for illegally entering Dominica. Choksi, now back in Antigua on bail, spoke at great length on how he went missing. Excerpts from the interview:

Q/ Your wife told me that you left your house around 5pm on May 23 to go out for dinner, and you did not come back. You went missing. Your wife, with a couple of other people, went to the police station and lodged a missing person’s report. The Antiguan police could not find you that night. Then the next thing we heard was that you were in Dominica. This was a few days later. What happened after you left the house on May 23?

A/ Basically, I was to meet Barbara and we were to go for dinner. Normally, every day I go for a walk around [that] time.

Q/ You are talking about?

A/ Barbara Jarabik. And I took my car and went to pick her up. She opened the [door] and said, “Why don’t you come in for a few minutes?” I thought that maybe she was preoccupied; there was nothing wrong. I parked my car opposite her house. I walked back and entered her house, and she was having a glass of wine. She walked around and she made me sit on a sofa. Just after three-four minutes [of] my sitting [down]—she was also sitting there and looking at the doors on both sides of the house—I heard a huge noise coming from the main door. The house is such that on one side there is a road and on the other side is a marina. This is how most houses in Jolly Harbour (in Antigua) are. It was like an event management—people dressed in blue, the jersey was maybe grey or light blue. Tall, big guys—seven to eight of them—entered, mostly from the main door, and two or three came from the marina side. They said, “We know who you are, you are Mehul Choksi, and we are taking you for interrogation.”

And they just took over—two of them [held] my hands, two of them [held] my legs, one person put his hands around my neck, and I was totally taken over by them. I tried to fight, because this kidnap story was on for the last three years, since the end of 2018 when the whole election thing in India was coming up. I was told the plane was arriving, [that] they were sending a plane to pick me up. Many people used to say they are watching you, they will pick you up, they will kill you. All these rumours [would keep on coming] again and again every three months.

Some of my good friends here—business people—told me, “This is a safe place. Nothing like this could happen. Don’t worry about it.” And that made me bold. My main activity was mostly walking on the island because of my health. So, I could imagine this was going towards kidnapping. I was trying to fight…. Since the vaccination (for Covid-19, provided to Antigua by India), people told me, “This vaccination is given in return for you.” It is also on Facebook. If you [search for] ‘India is giving vaccination’, you would see [a post saying] this is being given [to Antigua] in exchange for Mehul Choksi, something like that.

I tried to push my legs, bite on their hands around my neck, and they were very angry and they beat me like anything. Then somebody came with a knife, [another] with a taser. The electric taser was like a huge horse-shoe with a pipe in the front…. I have not seen anything like [that]—a machine [with] electric sparks. They would just put it on my hand. For a second, I would become unconscious. When I was more aggressive, they would use [it]. They used it on my hands maybe three-four times, on my face—on the left side between the nose and the eye (points to the exact spot with his fingers), and even on the leg. They took total control. By that time, I was perspiring and almost unconscious. I said, “OK, OK, do what you want, please don’t beat me anymore.”

Q/ All this was happening in your friend Barbara’s sitting room? Is that correct?

A/ That’s correct. She moved out somewhere. She was not at the scene, but she was in the house. I could not see her. She did not protest, she did not do anything at all.

Then a couple of people went out on the marina side and brought a wheelchair inside the house. They put me on this wheelchair. They [tied] me up [with a rope]. Remember, all the time they were beating me… and I was almost half unconscious at that time. Two people tied my legs, two [others] tied my hands to the chair. My body was also tied up and they suddenly got black glasses, which were opaque, so I could not see further. I was trying to get up and fight. Again, they would use a taser. Then they put a gag in my mouth. I was becoming breathless. With the dark glasses, I could not see anything. They moved me towards the marina side; this must have happened. That particular time they put a mask on me. They were afraid if I made a noise I would catch the attention of people. I did not see anything of this—I was completely pressed [down] at that moment—but I was put on a boat. I [had] not seen that boat. I was choking. I do not remember how long that particular boat ride was, but I could feel the boat because [I could hear a bit of the sea waves] and the boat noise. I do not know how long that trip was. When I [could see], I was in the middle of a huge boat…..

Q/ If I could stop you there, I want to show you something and then we can carry on from there. Do you recognise this person? (A photo of Barbara Jarabik is shown to Choksi. She is named as a suspect in a complaint by his British lawyer Michael Polak to the Metropolitan Police in the UK, popularly known as Scotland Yard.)

A/ Yeah, this is Barbara Jarabik. I only knew her as Barbara. She told me about the Jarabik name this time—“how you spell my surname is you put J along with arabik, so it is Jarabik”.

Q/ So, you are 100 per cent certain that this is Barbara, the person you mentioned earlier about going to her house and being kidnapped in that house?

Q/ How many people were on the boat?

A/ That particular time, I could only see three people—two Indians, tall guys, and one helper from a crew. Finally, I came to know that there were five people on the boat—two Indian guys and three others, of which one was the owner of the boat, one was a crew member and the other one was a captain.

The two Indians were Punjabis. They said they were R&AW (Research and Analysis Wing) agents. They have been in the Army. We [had a] conversation and they said they are taking me for interrogation. Again and again, they would be very tough with me and beat me, slap me and things like that. I asked them, “Where are we going?” They said, “It is none of your business; just keep quiet.” They were very rough and rude with me. The owner of the boat was an old gentleman with a beard and the crew was young. The two (Indian) guys were in charge of me. 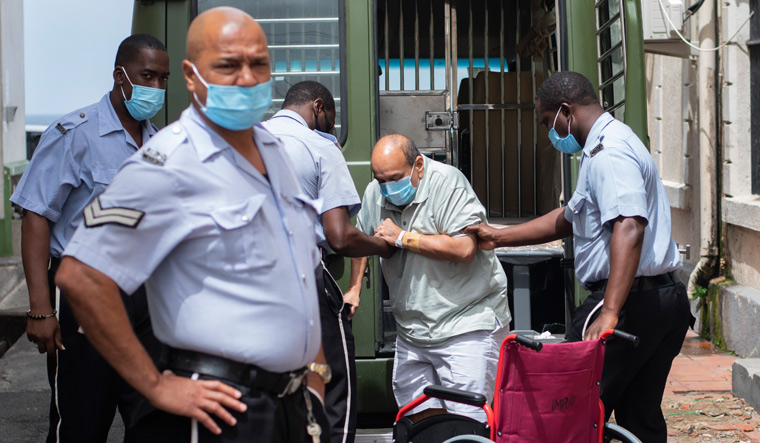 Law of the land: Choksi being taken to a court hearing in Dominica | AP

Q/ How long was this journey?

A/ In my opinion, the journey was more than 15-16 hours. Then one by one, they went to their room, and came [out] in a kind of Pathani salwar kameez—Punjabi clothes. One was in black and the other guy was in dark blue.

Q/ Let me just stop you there, because I want to show you something. Do you recognise these two persons? (A photo of Gurmit Singh and Gurjit Bhandal, named as suspects in the complaint by Polak.)

A/ Yes, these were the dresses they were wearing. They took this photograph. I could hear from a cabin when they arrived in Dominica, somebody—a crew member or whoever—was clicking and clicking the photographs outside.

Q/ So, these are the two people who were on the boat and who captured you and took you to Dominica? You remember them clearly? You can identify them clearly?

A/ Very clearly, very clearly. I was till then under the belief that these were R&AW agents. Finally, when I thought about it, the whole job was probably outsourced by the agencies. These were professional kidnappers or human traffickers, whatever you call them. This is what I hear now. I get it now. Then they handed their phone to me. The guy said, “I am Narendra Singh.” [He] was very official-like from India, who could be rough and polite. He said, “I am Narendra Singh and I am going to handle your case.” He gave me a few instructions. “When they interrogate you,” he said, “you please say that you were not kidnapped from Barbara’s house, that you met us in Jolly Harbour and I (Choksi) surrendered myself, (that) I (Choksi) want to go to India with you (authorities) and do not speak about what happened. Because of a white lady, your wife will feel bad. Besides, it is better to keep this matter out. If you do not do this, I will torture you and your family like anything.” May be half an hour later, the coast guard boat came. There were six-seven police [officers]. They were dressed in dark blue, kind of coast guard clothes. I thought these two Indian guys would also join me. But suddenly these two guys were not there.

Q/ So, who was behind your abduction?

A/ This was a job outsourced by Indian agencies. CBI [Central Bureau of Investigation] and R&AW outsourced [it] to an English company, an English abductor, who were professionals. People who make the law, who guard the law, they do such a criminal thing.

Barbara Jarabik, Gurmit Singh and Gurjit Bhandal, as quoted in media, have denied the allegations against them.