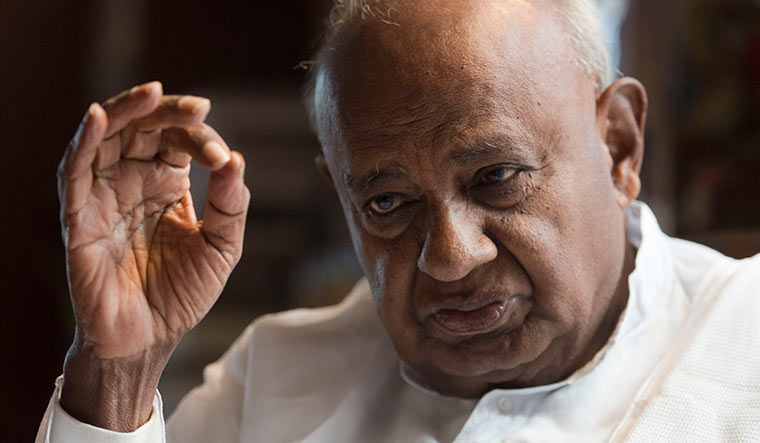 Twenty-five years ago, in June, 1996, a quiet unassuming Kannadiga became yet another “accidental prime minister” of India. This, after veteran West Bengal chief minister Jyoti Basu proposed the name of Haradanahalli Doddegowda Deve Gowda, the chief minister of Karnataka, as the leader of the United Front, an alliance of 13 parties, which had outside support of the Congress. Gowda's party, the Janata Dal, had only 46 MPs.
Today, when regional bigwigs like Mamata Banerjee, M.K. Stalin and Pinarayi Vijayan have given the BJP a drubbing, and have cornered the Congress in Kerala and West Bengal, the possibility of a third front coming to power in 2024, like in 1996, cannot be ruled out. But a coalition of regional parties tends to be fluid and unstable. Like it was in the case of the UF. Gowda was prime minister for less than a year; his government fell after the Congress withdrew support.
Sitaram Kesri, the then Congress president, said Gowda was a good-for-nothing who did not give him enough respect. Kesri said the Congress will rescind its decision if the UF replaced Gowda, which it did. Inder Kumar Gujral, Gowda’s external affairs minister, was sworn in as prime minister in April 1997. He, too, lasted for less than a year. Gowda, 88, refused to comment on who he thought was the apt regional leader to become prime minister in 2024.
In 1999, Gowda formed the JD(S) after the Janata Dal split. Since then, he has played the statesman, the power behind the throne, as the JD(S) formed ruling coalitions in Karnataka with both the Congress and the BJP.

Excerpts from an exclusive interview with Gowda:

Is the Union government to blame for the second wave of Covid-19? What were the drawbacks in the Narendra Modi government’s strategy?
I have stated repeatedly that I will not mix politics and the pandemic. However, it is important to acknowledge that people suffered, they are angry, and many lives were lost. Things could have been better. I think we grew complacent after the first wave, and prematurely declared victory against the pandemic.
We should have avoided super-spreader events. At the peak of the second wave, I wrote a letter to the prime minister. He responded positively.
I suggested things like decentralisation of Covid management, postponement of all by-polls and local polls for the next six months, to set deadlines for vaccination, to keep the poorest in mind when pricing vaccines, to drop identity proof for vaccination and to think of people who do not have access to the internet for vaccine registration.
I had emphasised to the prime minister that the virus does not understand political partisanship and we should fight it as one nation.
What needs to be done to reduce the vaccine shortage in the country?
There is no one thing that can be done to reduce shortage. A lot of things have to be coordinated with great efficiency, simultaneously. Vaccines should be made locally or imported. Even to make locally, we need to import (raw material).
Bureaucrats and businessmen do not solve problems, politicians do. We are a poor and populous country and we should have invested in vaccines early. Ironically, India is one of the largest manufacturers of vaccines and we are facing the greatest shortage.
I am glad that steps are now being taken to resolve this. Hopefully, we will be in a better position in the next couple of months. I am also happy that the G7 countries have signalled positively on vaccinating the world.

You yourself were affected by Covid-19. How did you overcome it?
Luckily, my infection was mild. My wife suffered much more. By God’s grace we came out of it. I thank the doctors and nurses who treated me. My family is also full of surgeons and doctors—my son, sons-in-law and grandchildren are all in the profession. They monitored us. My belief in science and in God saved me.

The JD(S) was among the 12 parties which supported the farmers' nationwide protest call on May 26. If this had happened while you were in power, what would your response have been?
In the first place, I would not have tabled the farm laws without widespread consultation. Why was there the hurry to push it through Parliament? That apart, I would have met the protesting farmers and spoken to them right at the beginning. Often, meeting protestors may not resolve the problem totally, but engaging is important in a democracy. That is what I have believed in all through my seven decades of public life.
In fact, that was the method I adopted when I was prime minister. I met Sunderlal Bahuguna and convinced him to end his fast. I met Medha Patkar and engaged her on the Narmada issue, and I met Mahendra Singh Tikait when the farmers in Uttar Pradesh had a problem. I met everyone who came with a grievance. I have repeatedly asked for farmers to be treated with dignity.

What does Modi need to do to end these protests?
He has to meet the farmers with an open mind and speak to them.

The Centre's negotiations with the NSCN(IM) of Nagaland have not made any headway. In 1997, you met these leaders, which paved the way for a ceasefire agreement. Why is this conflict lingering?
First, we have to admit that it is a complex problem. The issue has taken many turns since the framework agreement in 2015. I would not like to go into the details. However, in August 2020, I did make a statement, which was welcomed by Naga organisations. I said distrust had to be put aside and constructive diplomacy should be employed. When we negotiate there is always give and take, but in that process a balance has to be maintained. No party should feel it gave away too much. I had also urged that the talks should continue no matter how big the disagreements are, and that the progress made in the last 23 years should not be forsaken.

Karnataka assembly polls are due in 2023. The JD(S) has announced 'Mission 120' seats. How confident are you of coming back to power?

We are working seriously and revamping our party organisation. People have begun to see value in a regional party. Southern India is mostly ruled by regional parties, and Karnataka will also elect a regional party in 2023.

Your son, H.D. Kumaraswamy, said he would have continued as CM if the JD(S) had maintained good relations with the BJP.

I am not aware of this statement. I only know that he refused offers of support to his government from central BJP leaders, when our party was in a coalition with the Congress. He did not accept the offer because he did not want to hurt me. We have suffered at the hands of both national parties.

How do you look back at your tenure as the prime minister?

I have no regrets. I made the best use of the opportunity that God gave me. I was born into a poor peasant family in a remote corner of Karnataka and I never thought I would sit on the chair Jawaharlal Nehru, Lal Bahadur Shastri and Morarji Desai sat on.
When I became prime minister, I worked hard with utmost sincerity for every section of the society. There was not a single scam during my tenure. I had the best officers in the PMO. If God had given me more time, I would have served the poor and the peasants even more.

Have you forgiven Sitaram Kesri?
He was a political colleague and whatever happened was political, not personal. I have no bitterness towards him or anybody.