How pandemic has worsened Centre-state ties On June 7, Prime Minister Narendra Modi declared what was effectively a ‘one nation, one vaccination policy’ to defeat the pandemic. He announced a return to the original plan of procuring vaccines through a centralised plan. This was one Central intervention that the states welcomed. Opposition parties and non-BJP chief ministers were quick to remind the people that they had been demanding this for long. Many of them had also been highlighting the additional fiscal burden placed on the states by the vaccine bills. The burden had come at a time when their revenues had shrunk and the Goods and Services Tax dues had not been disbursed.

That the states had welcomed the Central intervention was ironic. The Centre and the states, especially those ruled by the BJP’s rivals, have increasingly been at odds in recent years, with the states alleging that the Union government was intervening in policymaking and treading upon their jurisdiction. But then, the states had also been exasperated at the slow pace of inoculation, the shortage of vaccines, the harsh responses from the Centre when they asked for more doses, and the restrictions imposed on distributing vaccines. It was these factors that forced the states to demand a decentralised vaccination policy.

The underlying tensions became evident during Modi’s speech on June 7. He took a dig at the states, saying the Centre had gone in for decentralisation of vaccine procurement because the states had asked for it, and that his government was now reverting to the original plan.

The vaccine issue is just one example of how the already strained relations between the Modi government and some states have worsened during the pandemic, and could actually be damaging the fight against the virus. After the BJP’s defeat in the West Bengal assembly polls, states ruled by BJP rivals have become visibly emboldened. They have been pushing back on what they view as the Centre’s heavy-handedness in dealing with the shortage of vaccines, oxygen cylinders, medicines and equipment.

There is huge resentment over the way the Union government has conducted itself during the pandemic. The Centre, specifically Modi, was in the driver’s seat when it declared the lockdown and decided the nitty-gritty of implementing it. But it soon withdrew from the scene when issues like the migrant-labour crisis and the economic fallout from the lockdown blew up.

The opposition says the Centre did not do what was needed to procure vaccines, and it then conveniently put the blame on states by making them responsible for buying vaccines for the 18-44 age group. Even now, there is doubt whether the Centre can supply the requisite amount of vaccines.

Chief Ministers Mamata Banerjee of West Bengal, Uddhav Thackeray of Maharashtra, Pinarayi Vijayan of Kerala, Ashok Gehlot of Rajasthan, M.K. Stalin of Tamil Nadu, Arvind Kejriwal of Delhi and Hemant Soren of Jharkhand have been taking on the Centre. Even Odisha Chief Minister Naveen Patnaik, seen as neutral, wrote to other chief ministers over the Union government’s Covid vaccination policy.

Modi’s pandemic-related interactions have been described by the chief ministers as a one-sided process. His meeting with district magistrates has also not gone down well with them, as they feel it amounts to bypassing the authority of the state governments.

“The coming days will prove how well the states are able to establish their place in the federal scheme of things,” said Tiruchi Siva, the DMK’s Rajya Sabha member. “The Union government has, in the past, passed laws that have trampled over the rights of states. This trespass will not be tolerated by the Stalin government.”

The BJP has hit back by pointing out that states where its rivals are in power have recorded wastage of vaccines. BJP leaders have highlighted the allegation that hundreds of unused vaccine vials were found in garbage bins in Rajasthan. Recently, when shortage of oxygen cylinders resulted in the Delhi vs Centre tussle reaching the court, the Aam Aadmi Party accused the Union government of discriminatory policies. The BJP countered the charge by asking the state government why it had not utilised Central grants to arrange for adequate oxygen tankers or install oxygen plants.

Senior BJP leader Shahnawaz Hussain said non-BJP states were making complaints to score political points. “The Centre has helped the states to the fullest, be it in the case of oxygen or medicines. It mobilised all resources, and deputed the Army to help out,” he said.

But, according to senior Congress leader M. Veerappa Moily, the pandemic has only exacerbated the fault lines that have appeared in the federal set up over the past seven years of the Modi government. “In his election rallies, the prime minister asks people to vote for a double-engine government. This is dangerous. Does it mean that if a state is ruled by an opposition party, it is a single-engine entity? This exposes the discriminatory attitude of Modi and the BJP,” he said.

Moily said there was an urgent need to call a meeting of a body that is representative of the sentiments of all states, such as the National Integration Council. “The Centre cannot act like a big brother. It should look [towards] collaborating with the states,” he said.

Instances of cooperative federalism turning to competitive federalism have been plenty in recent times. State governments where the BJP is not in power have withdrawn the general consent to the Central Bureau of Investigation; clashed over matters related to law and order, and transfer and appointment of officials; opposed the Union government’s contentious farm laws passed last year; and demanded larger shares of revenues from GST. The Centre has been criticised for taking measures that, in effect, reduces the share of the states in the divisible tax pool. It has also allegedly trampled on the powers of the states by introducing the National Eligibility cum Entrance Test and the National Education Policy.

Majeed Memon, Rajya Sabha member of the Nationalist Congress Party, said the bitterness between the Centre and the states can be attributed to politics taking precedence over the need to follow Constitutional norms. “In its zeal to pursue its political goals, the Modi government has forgotten that it needs to respect the authority and autonomy of states,” he said. 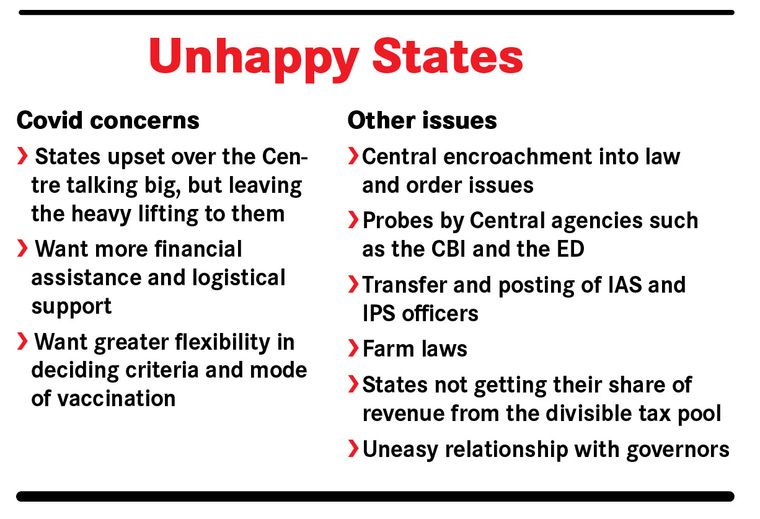 West Bengal has emerged as a focal point of the Centre-state tussle, with the Modi government and Chief Minister Mamata Banerjee clashing over a slew of issues. The hostilities peaked when Mamata allegedly walked out of a meeting chaired by Modi to assess the impact of Cyclone Yaas. In the next meeting, chief secretary Alapan Bandyopadhyay, too, left midway with Mamata.
Bandyopadhyay later quit IAS and was appointed adviser to Mamata.

Trinamool Congress leaders say the BJP-led Union government has been trying to undermine the authority of the state government. They cite the inquiries by Central agencies against party leaders, and the regular interventions by Governor Jagdeep Dhankhar as evidence of this.

“What the Centre is doing in West Bengal is a perfect example of what should not be done in Centre-state relations,” said senior Trinamool leader Saugata Roy. “They worked with a sense of hostility in their mad desire to win West Bengal. Now that they have been defeated, they have become vengeful.”

Delhi has also been an arena of the Centre-state tussle. A recent amendment to the National Capital Territory of Delhi Act, which granted more powers to the lieutenant governor of Delhi, was the culmination of a long-drawn battle. The latest flashpoint is the Union government’s refusal to approve the AAP government’s scheme to ensure doorstep delivery of rations.

“It has become normal for the BJP government at the Centre to slam the four or five state governments that are actually performing,” said Manish Sisodia, Delhi’s deputy chief minister. “The only common link between oxygen management, vaccines, ration and Covid management is the BJP’s deliberate inaction. It is not the Bharatiya Janata Party, it is actually the Bharatiya Jhagada (fight) Party.”