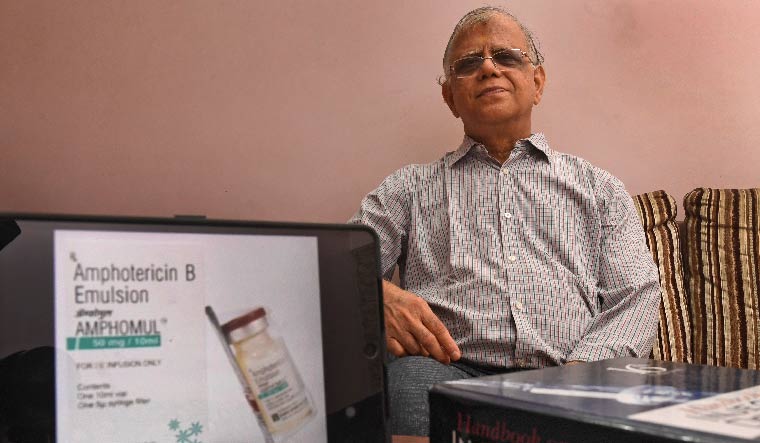 IN 2011, A TEAM of researchers at the Bharat Serums and Vaccines lab in Mumbai was basking in the afterglow of creating a generic drug to combat life-threatening fungal infections. Little did they know that, a decade later, their drug—liposomal amphotericin B—would be India’s answer to treating the dreaded black fungus (mucormycosis).

Srikanth Annappa Pai, who led the BSV research team, is happy to have helped, but is also concerned. India currently has about 28,252 cases of black fungus, which affects the eyes, nose and eventually the brain of people with a suppressed immune system. The fungal infection is a post-Covid-19 complication, especially found in patients who were administered excessive and early steroids to treat the virus, say experts. The steroids likely led to uncontrolled diabetes. Many have succumbed to the infection, and many others have lost their vision to it.

Worse, a severe shortage of the lifesaving drug has forced the Centre to augment its production and distribution, and also import it. The liposomal amphotericin B injection is out of stock, which has led to hoarding and black-marketing.

Given the huge disease burden and the fact that each patient would require at least 60 vials for a two-week treatment, India will need at least 16.95 lakh vials to treat the existing batch of patients. Notably, states such as Maharashtra, Gujarat, Rajasthan and Karnataka are reporting a spike in black fungus cases and are seeking a higher allocation of the drug.

The Centre is in the process of importing 6.8 lakh vials, while ramping up domestic production to 2.55 lakh vials in June compared with 1.63 lakh vials in May.

The Drugs Controller General of India recently granted approval to five more pharma companies to produce the drug; six are already doing it. The Centre has also imposed curbs on the drug’s export and has exempted it from the goods and services tax.

Pai, a development pharmacist who has spent more than three decades in the field, said he was wary of fast-tracking drug development by new entrants as it might compromise the safety of the drug. He also stressed on the need for comparative studies on toxicity before new brands are given approval for emergency use. “[Old players like] BSV, Sun Pharma and Cipla already have the technology to produce liposomal amphotericin B and can ramp up production,” he said. “The emulsion-based variant of the drug (amphotericin B emulsion) can also be used for Covid-19 patients as it is found to be safe for HIV and other immuno-compromised patients. The production of amphotericin emulsion is a single-day process unlike the liposomal variant, which takes five days.”

The emulsion variant was also used to treat kala azar (visceral leishmaniasis) in Bihar. “Earlier, the conventional drug was being administered for 30 days (0.5mg per day) and, hence, needed a longer hospital stay,” he said. “But our product (emulsion) could be administered in a single day (15mg), which reduced the hospital stay.” 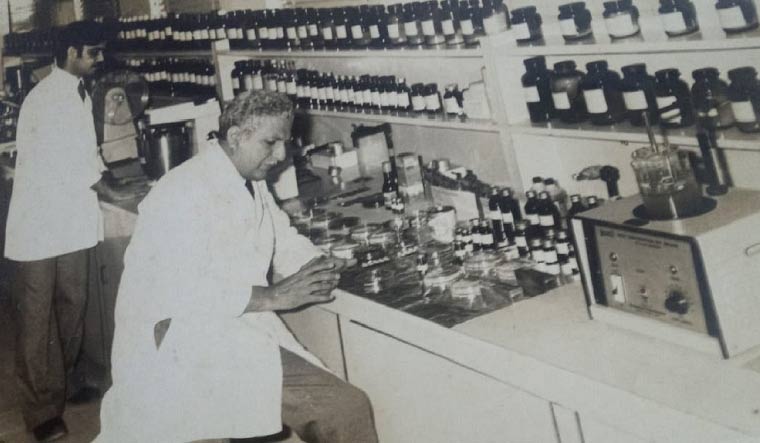 Great work: File photo of Pai in a lab.

Speaking to THE WEEK from his Mumbai residence, Pai reminisced about his journey from Gangolli, a small village in Udupi district of Karnataka, and his long association with BSV, which was producing biological products (not chemically synthesised) till Pai started the research and development department for tablets and capsules.

Pai did his BPharm at the Government College of Pharmacy (1975) in Bengaluru and MPharm in Manipal before landing in Mumbai. “My elder brother studied medicine,” he said. “But I could not pursue MBBS as colleges were few and my family could not afford to pay donation. Those days, BPharm was not widely known. But my elder sister, a food technologist who was working in Mumbai, told me about the course. I got a merit scholarship from the state government. Once in Mumbai, I gained a lot of experience from pharma stalwarts Dr G.B. Rama Sarma and Dr R.S. Baichwal (Glaxo). BSV, under Dr Gautam Daftary as technical director, encouraged me to aggressively pursue innovation.”

In the early 2000s, the drug AmBisome, a lipid-based formulation of amphotericin B, was being used to treat fungal infections. The US-based company Gilead Sciences owned the patent, but the European patent had expired in 2008. The BSV team was keen to develop a generic drug as the branded product was not only expensive, but difficult to get. Pai had worked with eight different companies, including Glaxo, before joining BSV in 1995.

“It was a big challenge as India did not have the necessary technology to redevelop a drug,” he said. “Only a fundamental formula of the drug was given to us. So, we had to do all three stages of development ourselves and needed permissions from the FDA (US Food and Drug Administration) and European Medicines Agency before the trials. We had started developing liposomal amphotericin B in 2004 and it took nearly eight years to launch the product.”

Pai has filed 16 patents on BSV’s behalf, but the first one remains special. “I developed Propofol, an induction agent for general anaesthesia used in major surgery,” he said. “While developing amphotericin, the challenge was to prevent endotoxin (by-products of bacterial growth) from entering the product. The [making of the] liposomal product is a three-stage process. If we made a mistake at any stage, we would know only at the end of the process and would have to repeat all three stages.”

He said the fact that BSV had a sound intellectual property cell, analytical development cell and the services of a patent attorney made all the difference. “For any generic drug, we need to verify if there is already a patent for the product, or the process,” he said. “Any infringement attracts huge damages in the global market. A patent attorney from Mumbai supported us with infringement opinion and freedom to operate in global markets.”

Since his retirement in 2012, Pai has been a freelance consultant working on a couple of projects in some European countries, Russia and Belarus. “In India, the drug manufacturers do not use the services of product developers after the transfer of technology,” he said. “India has many product researchers like me and I urge the government to avail our services by setting up a technology development centre to support innovation. We are retired professionals and cannot invest crores to build the centre. The drug developers do clinical studies abroad as it has wider acceptance and it is necessary for USFDA and EMA approvals. The trials are sometimes sponsored by government funding. Though India is as good as other countries, there is an inherent bias against us. I hope this mindset changes soon. The government must focus on product and technology development. A good product developed in the lab has no value if it is not commercialised.”