On March 25, a few days before the assembly elections in Kerala, state BJP president K. Surendran said his party would be making headlines once the results were out. His predictions have come true and how!

After hogging the headlines for losing the lone seat it had in the assembly, despite a high decibel campaign led by Prime Minister Narendra Modi and Union Home Minister Amit Shah, the BJP is once again in the news, and for all the wrong reasons. The party is facing a hawala scandal and its senior leaders are being interrogated by the police.

It all started with a highway heist in the wee hours of April 3, three days before the elections. Nine men intercepted a car—which was on its way from Thrissur to Ernakulam—at Kodakara, by staging a fake accident. They looted the money being carried in the car. The car belonged to Kozhikode resident Shamjeer Shamsuddin; the driver was Abdul Rasheed, also from Kozhikode.

Four days later, Shamjeer filed a police complaint stating that Rs25 lakh, belonging to his employer A.K. Dharmarajan, a real estate businessman, was looted from the car. Shamjeer told the police that the money was being taken to Kochi for a real estate deal.

Based on Shamjeer’s complaint the police registered a criminal case under Section 395 of the Indian Penal Code. “It looked like a highway robbery initially. But the picture changed as we started apprehending the robbers and recovering the money,” said a police officer. “The amount recovered was much more than what was stated by the complainants.” The police found that 03.5 crore was looted from the car, and this put the complainants under police radar.

Upon further investigation, the police found that Dharmarajan was earlier into the liquor business and was jailed once for smuggling illicit spirit. Two cases are still pending against him. On being questioned, Dharmarajan said he got the money from Sunil Naik, former state treasurer of the Bharatiya Janata Yuva Morcha. Naik told the police that Dharmarajan was his business associate and that the money was meant for real estate business, as stated in the complaint.

“Dharmarajan kept changing his statements and we felt that there were more skeletons in his cupboard. Gradually, the complainant became a suspect,” said the officer. Dharmarajan later claimed that he was a BJP leader with “connections” and that the money was for election expenses.

Dharmarajan said it was BJP’s Thrissur district secretary K.K. Aneeshkumar who had booked him a room in the city. Aneeshkumar confirmed it, but said he did so because Dharmarajan was in charge of supplying printed campaign material. “The BJP has no connection with the hawala robbery case,” said Aneeshkumar, who was the BJP candidate from Kunnamkulam. 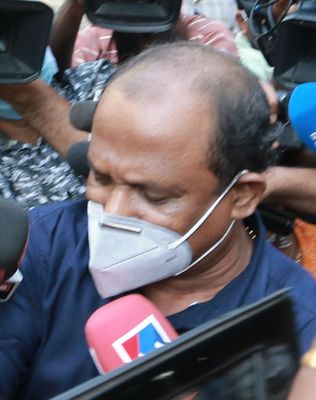 When questioned further, Dharmarajan said the money was meant to be handed over to M. Ganeshan, general secretary (organisation) of the BJP’s state unit. He said the BJP’s Alappuzha district treasurer, K.G. Kartha, too, was aware of the issue. Both leaders, however, denied the allegation and said they knew Dharmarajan only as the supplier of election material.

After analysing Dharmarajan’s call records, the police found that senior BJP leaders had contacted him on the days before and after the heist. The name of Surendran’s son, too, is said to be on the list. The police now believe that Dharmarajan brought nearly Rs10 crore to Thrissur. He handed over Rs6.30 crore to BJP leaders in Thrissur and it was the rest of the money that got robbed. In yet another twist in the case, Dharmarajan, Naik and Shamjeer filed a petition in a local court on June 8 to get back the money confiscated by the police, conceding that the car had, in fact, contained Rs3.5 crore. The petitioners claimed that the money was for business purposes and that they had the documents to prove its source.

The state government has set up a special investigation team under Thrissur range deputy inspector general A. Akbar and it has so far arrested 20 suspects. The Enforcement Directorate sought details of the case, which the police submitted on June 1.

Even as the state BJP has completely distanced itself from the hawala scandal, party circles are rife with conspiracy theories. While many point at the intense faction feud within the state unit as the main reason behind the controversy, some say the heist was an “inside job”. The issue got further complicated as Rishi Palpu, state vice president of the BJP’s OBC Morcha, alleged that some senior leaders were involved. Surendran expelled Palpu from the party within hours of his making the allegation.

More trouble was in store for Surendran as K. Sundara, the BSP candidate from Manjeshwaram—one of the two seats from where Surendran contested—alleged that Surendran gave him Rs2.5 lakh and a smartphone to withdraw his nomination. Sundara said he was promised Rs15 lakh and a house and a wine parlour in Karnataka if Surendran won. Interestingly, in the 2016 assembly elections, Surendran lost from Manjeshwar by just 89 votes, while Sundara, who contested as an independent candidate, polled 467 votes. “Surendran felt that the similarity between our names might confuse voters and hence asked me to step aside,” said Sundara. Although Sundara withdrew, Surendran lost by a margin of 745 votes to United Democratic Front candidate A.K.M. Ashraff. The Kasaragod first class judicial magistrate has granted permission to file a case against Surendran under Section 171B of the IPC (bribery to sabotage electoral rights) following a petition by the CPI(M) candidate V.V. Ramesan, who finished third. The Kasaragod district crime branch is investigating the case.

Adding to Surendran’s woes is a leaked audio conversation between him and a close aide of tribal leader C.K. Janu of the Janadhipathya Rashtriya Party (JRP). Praseetha Azhikode, treasurer of the JRP, alleged that Janu had demanded Rs10 crore from Surendran to return to the National Democratic Alliance before the elections. According to the audio clip, Surendran offered Janu Rs10 lakh. The JRP returned to the NDA at the concluding function of the BJP’s Vijaya Yatra in Thiruvananthapuram on March 7.

Janu, who lost from the Sultan Bathery constituency in Wayanad district by a huge margin, however, denied the allegation. “If I needed money, I could easily ask Surendran…. I can even contact Shah. These are baseless allegations,” she said. Surendran, too, has denied the charges. “Neither did she ask me for money, nor did I give any. We had election expenses in Sultan Bathery, and everything was met as usual,” he said. Praseetha, however, said she was sure that Janu got the money and released more audio evidence against Surendran. “Am I a fool to raise baseless allegations against the state president of the party which rules the country?” she asked.

Surendran’s secretary and driver were already quizzed by the police. And there is a possibility of his son being questioned as well. When asked whether his son had called Dharmarajan, Surendran said it was for the police to find out.

The morale of the Kerala BJP, which is at rock bottom following the devastating poll defeat, has been further affected by the fresh allegations. “Money was splurged like never before in the elections as the state unit had given an impression to the central leadership that the party would win at least 15 seats. Some leaders might have felt that nobody would notice if a few crores went missing from the huge amount provided,” said a senior BJP leader who is side-lined in the party now. “The party has lost its face, thanks to the selfishness of a few.”

The BJP state unit, however, said the state government was playing politics by targeting Surendran. “The CPI(M) is trying to demoralise our cadre by dragging the state president into the matter. Our party has no link to the hawala case,” said former state president Kummanam Rajasekharan. Union Minister V. Muraleedharan, too, said the police were deliberately focusing on Dharmarajan to trap BJP leaders. “Dharmarajan is the complainant in the case, but the police are tracing his call list instead of that of the culprits. They are being vindictive,” he said.

The Congress, however, alleged that there was an understanding between the CPI(M) and the BJP. Opposition leader V.D. Satheeshan said the government was going soft on the BJP and no top leader was arrested so far. “Everybody who is involved in the case must be brought to book,” he said.

The BJP national leadership has stepped in finally, sensing the turmoil in the state unit. It has ordered an internal inquiry into the matter and has summoned Surendran to Delhi. State leaders have been asked to get their act together and not to air personal opinions on the matter.