BJP's rise in Puducherry has come at the expense of allies 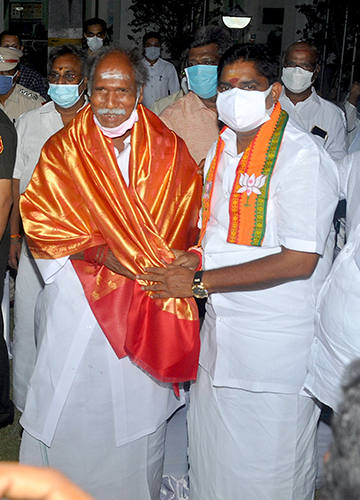 ON MAY 9, HOURS before he tested positive for Covid-19, Puducherry chief minister and All India N.R. Congress president N. Rangasamy wrote to Lieutenant Governor Tamilisai Soundararajan proposing K. Lakshminarayanan as pro-tem speaker of the assembly. Soon after, the chief minister was admitted to a private hospital. When he returned home on May 20, he was surprised to find out that the appointment had been put on hold.

Lakshminarayanan was appointed on May 21 and he was administered the oath of office by the lieutenant governor on May 26, more than a fortnight after the chief minister proposed his name. Rangasamy has found it challenging to pick his own cabinet. Though his inner circle cites health reasons, highly placed sources within the AINRC attribute it to the newfound influence of the BJP.

It all began in the first week of March, when Rangasamy signed an alliance pact with the BJP. The national party had no presence in the Union territory. Its three nominated MLAs had got into the assembly thanks to the support of former lieutenant governor Kiran Bedi. All three, including unit president V. Saminathan, had lost their deposits in the 2016 polls.

In 2021, the BJP wanted elected MLAs in Puducherry. And so, it began poaching Congress MLAs in January. The Congress government, led by V. Narayanasamy, had spent almost all its time fighting Bedi, and therefore failed to concentrate on internal affairs. It also could not deliver on its promises to the people. So, it faced anti-incumbency and internal turmoil, and was decimated at the polls.

The Congress now has two seats compared with 15 of 30 elected seats last time, and its vote share was cut in half. The party’s state president, A.V. Subramanian, lost his deposit. The BJP improved its vote share by over 10 per cent and won six seats. It got three MLAs nominated once again. Two of the nominated MLAs had joined the BJP just ahead of the polls—K. Venkatesan, a former Dravida Munnetra Kazhagam MLA and V.P. Ramalingam, brother of former Congress speaker V.P. Sivakolundhu. R.B. Ashok Babu, an advocate and the BJP town unit president, was the third nominated MLA. They were appointed on May 10, while Rangasamy was hospitalised in Chennai. Pro-tem speaker Lakshminarayanan, too, had defected from the Congress to the AINRC on the eve of the polls.

An AINRC MLA, who requested anonymity, told THE WEEK that the BJP did not share the names of the nominated MLAs even with Rangasamy, “even after their appointments”. The AINRC has 10 elected MLAs, the BJP now has nine in total. “They have the support of one independent MLA, which means they have 10 MLAs,” added the AINRC MLA. It is learnt that the BJP is working on getting more support; only one of the six independents has declared support to the AINRC. At least two more are expected to support the BJP. So, it could have 12 MLAs, or even more, in the 33-member assembly—against the AINRC’s 11.

Rangasamy and his team feel they have been backstabbed by their allies. Though the MLAs were sworn in on May 26, the assembly would only be convened after the BJP and the AINRC reach a consensus on the ministerial berths and the post of speaker. “They (the BJP) are demanding lucrative portfolios,” said the AINRC MLA. “It is for our leader to decide. He has not spoken to any of us till now. We do not know what is happening.” Rangasamy has been at home since being discharged and sources said he could not be reached even by officials in the chief minister’s office.

The BJP is learnt to be demanding the creation of a deputy chief minister’s post and plum portfolios, including education and finance. It is said that Rangasamy, a humble and spiritual man, did not expect this from the BJP. Former Puducherry Congress chief A. Namassivayam, who won on a BJP ticket this time, is apparently demanding the post of deputy chief minister. He is also Rangasamy’s relative. THE WEEK’s attempts to reach Namassivayam for his comments were unsuccessful.

Meanwhile, the All India Anna Dravida Munnetra Kazhagam, which was also part of the NDA alliance, is also upset with the BJP. The AIADMK contested in four seats and lost all four. Sources said that the AIADMK was hoping to get one of its former MLAs nominated to the house.

The DMK has six MLAs and is the biggest opposition party. Sources said that while the DMK did not approach the AINRC to form the government, the MLAs and office bearers in the Union territory told party president M.K. Stalin that they would like to be part of the government.

Though a Union territory, Puducherry is very much Tamil heartland. And, thanks to its machinations during Bedi’s tenure as lieutenant governor, the BJP stands taller than the Congress and the Dravidian parties, for now.