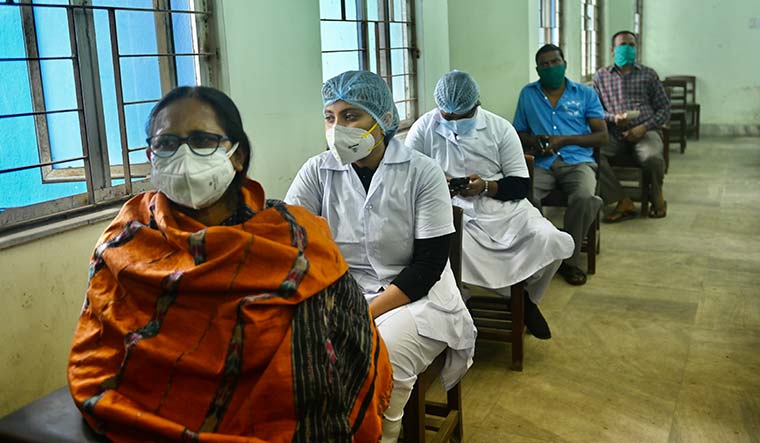 In mid-April, Subhash Pandey, 64, a senior officer in the Chhattisgarh health department succumbed to Covid-19. He had taken his second dose of the vaccine two weeks earlier. Pandey's, incidentally, was also a case of reinfection. However, only a week later, when the Union health ministry gave its first presentation on the extent of breakthrough infections in the country, it made no mention of Pandey's death, neither did it share any information on the fatalities caused by breakthrough infection.

Breakthrough infection is a term to describe people getting an infection even after they have been inoculated against it. It is there for almost every vaccine, but at a very negligible percentage. However, with Covid-19, the story is different. None of the vaccines against it, at present, are able to prevent a person from getting infected, said N.K. Arora, chair, Covid subcommittee, National Technical Advisory Group on Immunisation.

There is no argument with this scientific limitation. However, the government's data on breakthrough infection is so much in dissonance with anecdotal evidence that questions about data collection are naturally popping up. Across the country, the first batch of inoculated populations—health care workers and frontline workers—are falling ill in big numbers. In government offices, the spread of infection even within the vaccinated population is high, and these infections are being brought home to unvaccinated family members. A senior IAS officer said that in the Jharkhand department he was posted earlier, at least 80 people have had breakthrough infections, and around 15 per cent of them were seriously affected. None succumbed though.

The only figures that the ministry has shared so far are the Indian Council of Medical Research's compilation, which puts the incidence of breakthrough infection at between .04 to .02 per cent, across both the vaccines. Incidentally, it does not show greater protection after the second dose; the percentages remain much the same. The general narrative is that the vaccine, while not preventing the infection, reduces its virulence by a large extent. As one doctor said, this vaccine is like a helmet, it may not prevent the accident, but it will help save your life.

Anecdotal evidence (which is the only fallback in the absence of data compiled either by the government or any independent agency), again shows that even after the vaccine, not all cases are “mild”. Lucknow resident Adhikant Thakur, 76, fell ill within three days of his second shot, his oxygen saturation dipping alarmingly to 83 per cent. He needed hospitalisation, but given the collapse of health infrastructure, his daughter, a senior government functionary, could not manage a hospital bed, not even an oxygen concentrator at home. Thakur, luckily, pulled through with prayers and steroids, but there is no data available on those who could not.

“In my own acquaintance, however, I know of three who died post vaccination,” said a senior government official in North Block. “One was a 60-year-old who was doubly vaccinated, another a doctor in his 30s. Yet another died soon after the shot; it could have been a case of thrombosis, which is why the vaccine is not so well received in Europe. Here, however, there is no investigation, so we can only guess.”

While there is no question that vaccination is the way forward for developing mass immunity against the virus, experts say that a person is best protected a few weeks after the second shot. In Pandey's case, there had been a reasonable time lapse, but his comorbidites were high. In most others, however, the vaccination has coincided with a ferocious second wave, making the probability of exposure much higher. “It is likely that the data shows underreporting since it was not focused on certain populations but was a general database. Also, this was a passive collection, based on what people voluntarily reported. We were not actively seeking out breakthrough infection reporting,” says Samiran Panda, head of ICMR's epidemiology and communicable disease wing. “Breakthrough infections are also determined by the caseload, which is very high in some areas. It is also determined by whether the vaccinated people were observing Covid-appropriate protocol.” Even the Centers for Disease Control and Prevention in the US said that the numbers would always represent an undercount. In the US, however, they have recorded 132 deaths post vaccination; similar data has not been released in India.

There are also questions on the efficacy of the existing vaccines against newer variants, even though limited studies show that the vaccines are effective. However, there is no doubt that a better study of breakthrough infection could help improve understanding a virus that has so far been wily.

The ICMR only edited its format for testing in early April to add in a box on vaccination status. “Our meta data collection is so poor that it is difficult to glean much information from it. The forms that come in with the genomic tests are often incomplete, making it difficult to get a clear picture,” said Rakesh Mishra, virologist and head of CSIR-Centre for Cellular and Molecular Biology, Hyderabad, one of the centres where the virus is being studied genomically. His centre has already asserted that the vaccines are effective against the new variant. However, he said that given the asymptomatic spread of the virus, it is difficult even to understand whether the patient had been reinfected or not. In some cities, seropositivity is nearly half the population.

The limited genomic studies on reinfection and breakthrough infection in India have, so far, not thrown up any significant observation. Mishra, however, said that more studies might make a clearer picture.