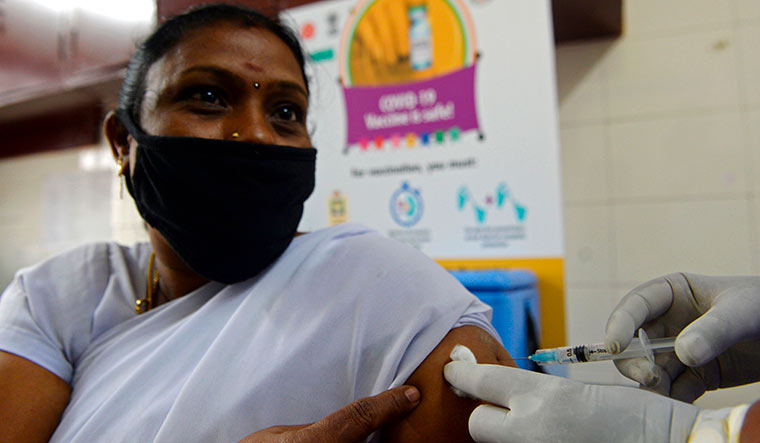 MANIKANDAN NARAYANAN, 62, took his first dose of Covaxin on March 18, at a private hospital in Kodambakkam, Chennai. After 28 days, he went for the second dose, but the hospital told him that the vaccine is “not available”. In the subsequent days, he tried again, but the response remained the same.

Finally, acting on a friend’s advice, he went to a government vaccination centre on April 26 and got his second dose, after waiting in a long queue. “I was told that Covaxin is in short supply,” he said. So, when newspapers reported the vaccine wastage in Tamil Nadu, Narayanan was shocked.

According to the directorate of public health and preventive medicine (DPH), Tamil Nadu, the state wasted 4.5 lakh doses between January 16 and April 20. The wastage stood at around 10 per cent between January and March, as the vaccination drive was open only for frontline workers.

Said Tamil Nadu Chief Secretary Rajeev Ranjan: “In the initial days of the vaccination drive, only five to six persons would show up at the vaccination centres, [and that too,] late in the evening. The vaccines were administered to them, only to ensure that they are not disappointed. Many opened vials had got wasted [in this manner].”

J. Radhakrishnan, health secretary, Tamil Nadu, said that once a vaccine vial is opened, it has to be used within a few hours, and should be stored 2 degrees and 8 degrees Celsius. “These [conditions] resulted in the wastage,” he said. “But now, as people turn up in large numbers, we can ensure zero wastage in the coming days.”

He recalled that hesitancy was very high during the initial phase of the vaccination drive. After Kollywood actor Vivek’s untimely demise on April 17—two days after he took a shot—rumours were spread that the vaccine caused his death. “[But the government now ensures that] such rumours are stopped at the initial stages itself,” said Radhakrishnan.

As the vaccination drive turned active, the vaccine wastage has been brought down. “The wastage came down to 8 per cent as we started vaccinating people above 45 years since mid-March,” said Director of Public Health Dr T.S. Selvavinayagam. The wastage is expected to go down further after May 1, when everyone above 18 becomes eligible for vaccination.