How the second wave of COVID-19 exposed a flagging economy 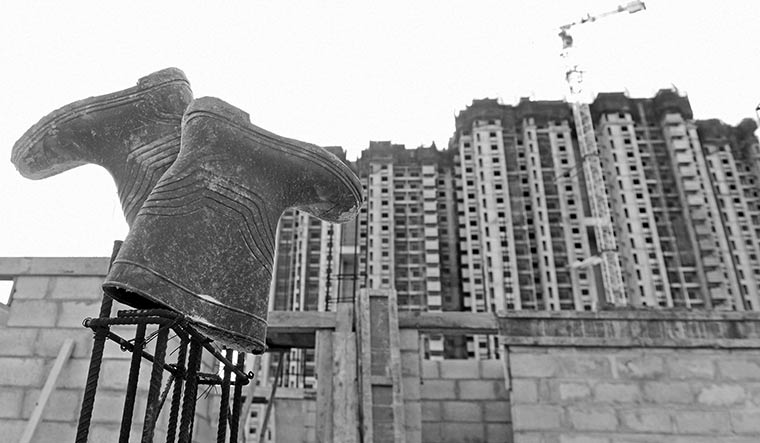 Bad times: Many realty projects have been paused because of the slow market and shortage of labourers | Bhanu Prakash Chandra

As the second wave of Covid-19 brought India’s health care system to its knees, the worry increasingly is on how much pain the next target in line, the economy, can bear. Hope may be infinite, but stark reality is harshly finite for thousands of small and medium businesses already bleeding from the first round of spikes last year.

In fact, indications are emerging that the economy had already slowed down before the second wave hit with brute force, despite all the pep talk of V-shaped trajectories, festive booms and ‘better than pre-Covid level’ growth claims. “Those were just green shoots of recovery. The real economy has not grown at this point of time,” said Sethurathnam Ravi, economist and former chairman of Bombay Stock Exchange. “If you look at the last two and a half years, we were not doing well, our growth rate was low [before] we got into a negative growth [after last year’s lockdown]. Manufacturing output hasn’t come anywhere near its earlier peak. We are not anywhere in a growing zone.”

He said the government and India Inc papered over the cracks, and celebrated too soon. “All of it was on the mistaken over-optimism that we had overcome the virus, the vaccine had come and it was believed that the vaccine would take care of everything,”he said.

The writing was on the wall all the while. In the rush of the irrational exuberance following the pick-up in sales during the festive season, however, it was conveniently ignored. R.C. Bhargava, chairman of Maruti Suzuki, had warned way back in October that the increase in sales was primarily due to pent-up demand. But Finance Minister Nirmala Sitharaman kept repeating that recovery would sustain, and that it was not just due to pent-up demand.

Once the festive season high got over, however, the worry lines started to show. “After a strong bounce-back, some of the economic indicators started showing signs of weakness,”said Rajani Sinha, chief economist & national director (research), Knight Frank India. “The core sector contracted by a sharp 4.6 per cent, while the Index of Industrial Production (IIP) contracted by 3.6 per cent in February. The Purchasing Manufacturer’s Index (PMI) of both manufacturing and services sector has inched down in March 2021.”

With ‘recovery’ending up a flash-in-the-pan, the bigger worry is the overall picture the economy presents. One factor that makes this clear is the lack of increase in bank credit, which means fewer businesses are taking loans for capital expenditure. This had already declined to 5.7 per cent before the pandemic, and it dipped further to 5 per cent even after unlock. Worse, services and manufacturing sector credit is negative.

“How do you define growth? New capital expenditure and fresh demand. Both have not come,”said Ravi.

In retail, consumption has dropped once the pent-up demand exhausted. That is why Prachir Singh, senior analyst with Counterpoint, a consultancy which tracks mobile phone sales, is not happy despite the stellar sales in the past few months. “The consumer demand will take a hit,”he said.

Take the footwear industry, for instance. The festive rush and pent-up demand had raised hopes of getting back to its pre-pandemic size of Rs70,000 crore. “We were expecting a greater rate of growth in financial year 2022. However, all these expectations have now been put on hold,”said Harkirat Singh, managing director of Aero Club, which makes Woodland shoes.

The scenario is more or less the same across industries. And, this time around, more than any draconian lockdown or government rules, it is the pandemic itself that is the villain. Many companies have shut down production due to high rates of infection among employees. Hero, the world’s biggest two-wheeler manufacturer, announced that it would temporarily halt operations at all its manufacturing facilities. Almost all electronics and white goods manufacturers have drastically cut down capacity.

“Rising absenteeism is likely to hit production,”said a Gurgaon-based auto component supplier in a statement. “As cases continue to rise, output may be hurt more severely. Major vehicle and parts makers are managing the situation better. However, it is very tough for tier II suppliers and below.”

The second round of ‘whiplashing’ could be lethal for many businesses that have yet to recover from the woes of the first. While it holds particularly true for small and medium businesses, some sectors like aviation, hotels, retail (malls and branded stores), restaurants and entertainment will struggle to stay afloat if the situation continues for long, lockdown or not. “March was low, but we had lots of hope on weddings booked in April, May and June. Now April has been washed out and May will definitely be poor,”said Ajay Bakaya, managing director of Sarovar Hotels.

Sectors like automobile, real estate and construction could also get severely impacted if the severity of caseloads does not come down in the days to come and further restrictions or lockdowns are announced. Together, these sectors contribute a significant chunk of India’s gross domestic product.

This is where Das’s ‘infinite hope’comes into play. “All eyes are on how best we can navigate through the next few turbulent weeks,”said Elias George, partner and head (infrastructure, government and health care), KPMG in India. “With the extension and the broad basing of the vaccination effort, it is hoped that the overall health security for the population will improve, and the economy will get back on an even keel over the medium term.”

While more lockdowns cannot still be ruled out, the general feeling is that with exemptions given for business activity, they may not have the debilitating impact like the last time. “There have been some learnings for businesses, government and households from the first wave of Covid, which should help to handle the situation better in the second wave,”said Sinha of Knight Frank. According to Arvind Nandan, managing director (research & consulting), Savills India, “Though the ongoing second wave is far more widespread, the overall economic impact is expected to be less pronounced.”

The bigger fear is the rapid rate of spread. “It is a health crisis and there is a lot of uncertainty on how much time it will take to control the crisis,”said Sinha. “The pace of vaccination will have a strong bearing on the eventual move of the economy towards normalisation.”

But that will not be before the second wave leaves a trail of devastation. “The lower-income category and unorganised sector will see a lot of job and income losses from the second wave,” Sinha said. Added Harkirat Singh, “Extended help will be required from the government.”