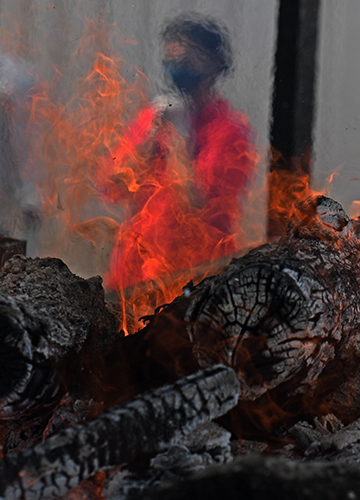 Ashes to ashes: A mass cremation of people died of Covid-19 at Channenahalli village near Bengaluru | Bhanu Prakash Chandra

Mea culpa, rues Anurag Agarwal. Head of the CSIR-Institute for Genomics and Integrative Biology (CSIR-IGIB) in New Delhi, Agarwal coined the term ‘double mutant’, which has become the buzzword in India now. But he says he never intended it to be part of the common parlance.

“We were writing a scientific note, where we were describing a new Variant of Concern (VoC) that had been found,” says Agarwal. This variant of the SARS-CoV-2 virus, which they first identified in Maharashtra, had several mutations, as is the normal case with newer generations of viruses. However, among those mutations, two were of particular interest, since they showed “immune escape” in vitro. This means that when geneticists cultured virus genomes in the lab and subjected them to extreme antibody pressure, which should effectively neutralise the virus, some mutations still survived.

Using a method of nomenclature called Pango (there are multiple nomenclature methods, which cause much confusion even among the scientific community, forget laypersons), they identified this variant by a most uninteresting sounding name called B.1.617, flagging two of the various mutations. These mutations are E484Q and L452R, which are simply codes for the point on the genome at which a particular amino acid (indicated by the letter) is replaced by another. “While writing the paper, we had to repeatedly talk about the variant, and I referred to it at some point as the double mutant,” explains Agarwal.

This catchy word was first heard in public on March 24, when Union health secretary Rajesh Bhushan used it in his briefing. And before they knew it, the term was bandied around by just about everyone. It also caused a measure of concern, with people beginning to mistakenly believe that the double mutation made the virus a worse enemy than the ancestral Wuhan strand.

A few weeks later, two developments happened. Some scientists noted that there was another mutation, P681R, on the B.1.617 variant that was “interesting” because this mutation “probably helps the virus enter the host cell more easily,” in the words of virologist Saumitra Das, who heads the National Institute of Biomedical Genomics (NIBMG), Kalyani, West Bengal. So, people began talking about the double mutant actually being a “triple mutant” and thereby even more fearsome. “It is the same variant—B.1.617,” says Agarwal. “We were studying for immune escape, so we flagged the two mutations we connected to that trait. We had also noticed P681R, but in our story, it was only a sidekick; the protagonists were the first two. For someone else, who was looking for another characteristic, P681R became the star of the narrative.”

But even before this confusion could be clarified, the NIBMG flagged yet another variant, B.1.618, which is prevailing in West Bengal. As it identified three mutations here, this, too, got referred to as the triple mutant, again, attributing to it triple the power for destruction. And so, there are now two triple mutants doing the rounds of the country, the Maharashtra double which is a triple, and the Bengal triple! 618, as it is best to call this variant, is still under study. It is not even classified as a VoC, says Das. It has not shown any potential to spread more virulently or attack more lethally.

The prevailing confusion is only natural, given the complicated, and not standardised, system for naming viruses and their variants. “The general public is usually not interested in virus names, and the existing system of numbers and letters work well for the scientific community, since we all know the codes, and can immediately identify the mutations by their names,” says Agarwal in defence. Right from the ancestral genome (the Adam or Eve genome), the phylogenetic tree of a virus can be a mindboggling alphabet and numerical soup, as subsequent generations are clumped into clades and lineages and variants. Unsurprisingly, terms like double mutant or UK strain enter our vocabulary, all of which are so misleading. Failed by the system: A Covid-19 patient at LNJP Hospital in Delhi | J. Suresh

The B.1.1.7 lineage, referred to as the UK variant, got its name because it was first identified in the UK; it does not mean it originated in the UK. Despite the stigma such names give to a place, they do become common. We have seen it with the Spanish Flu, Ebola, Nipha and Zika viruses and a host of diseases. Despite efforts of the scientific community to not associate the pandemic with China, the Wuhan connection remains indelible. The World Health Organization is working out a standardised nomenclature system, but while that may ease confusion among scientists, for the laypersons, it will still mostly be gobbledygook.

618 was first also referred to as the Indian variant, even though Bhushan insisted there is no such term. While his attempt was to ensure India does not get stigmatised, the fact is that given India's expanse, there cannot be one single Indian variant. Already, 617 is being called the Maharashtra variant, while 618 as the Bengal variant. But if yet another variant is reported from these states, what will that be called, asks Agarwal. “Right now, given the large number of cases, India must be having the largest pool of variants, too,” notes Rakesh Mishra, head of the Hyderabad-based Centre for Cellular and Molecular Biology, adding that mutation is the nature of viruses. Only if a mutation is associated with a more severe infection or antibody resistance does it become a matter of concern.

In fact, over the past year, the virus map of the country has changed dynamically. In the initial weeks, the Wuhan strand came to India, but quickly enough, a variant called D614G established itself all over India, says Mishra. It remained dominant till winter, when the UK variant came over by flights. This variant is known for higher infectivity or spread, but not necessarily higher morbidity in patients. 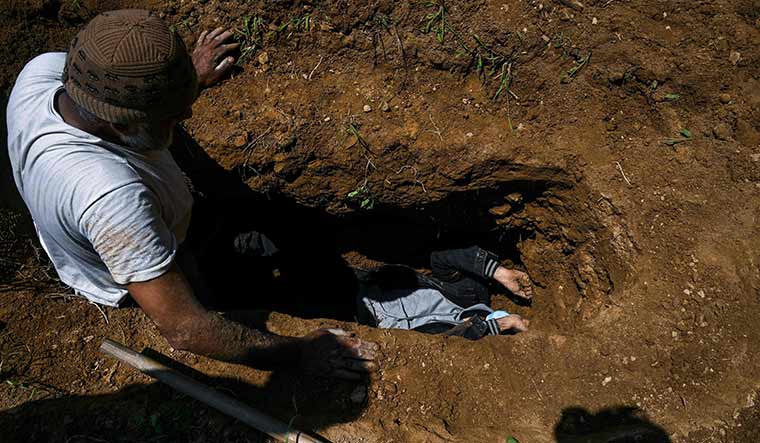 Immeasurable loss: Umar Farooq of Srinagar measures a grave dug for his mother, who died of Covid-19 | AFP

By December, the variant map of India began changing remarkably. The UK variant, despite being a VoC, was not contained properly, especially in north India. In Punjab, it now accounts for 90 per cent of the cases; in Delhi, for half the cases sampled, followed by the 617 variant. On the other hand, despite the international flights to Mumbai and Hyderabad, identification and quarantine of international passengers carrying this infection has meant that the UK variant is less established in the peninsula. While in Maharashtra, 617 is the most prevalent variant, elsewhere in the south, N440K is more commonly seen. “It is of no real consequence as it is not leading to any greater infectivity,'' says Mishra. The Brazil and South African variants are also seen in India, but in very low titre.

In West Bengal, 618 and 617 are vying for supremacy, and scientists feel that the more mobile 617 might become dominant and even edge out 618. The Uttar Pradesh surge is still a study in progress. While it is possible that due to proximity, Uttar Pradesh might have a similar variant pattern as Delhi, Sujeet Singh, head of National Centre for Disease Control, which is analysing samples from north India, says the picture will get clear once their analysis is done. Bengaluru's surge, say geneticists, is not dominated by any particular variant. Overall, in the country, the UK variant is the dominant one, largely because of the north Indian surge. 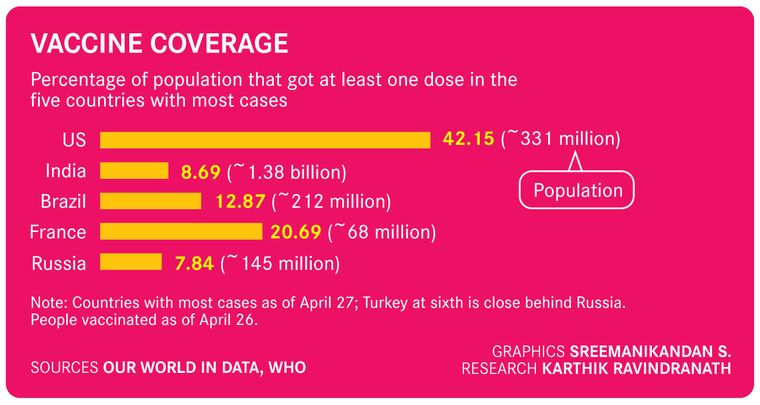 What does an understanding of these variants mean for the people? Nothing, say scientists. The spread of the virus remains the same, irrespective of the variant. So far, so is the treatment. Thus, the existing protocol for prevention works. “In Punjab, for instance, the UK variant is dominant, but any variant would have done the same job, when people were gathering in droves for protests and parties,” points out Mishra.

These genomic studies are more for the understanding of researchers in epidemiological studies. A dynamic variant map will show how the infection is spreading, and therefore can be effectively used in epidemiological management, by physically cutting off the region from where it is spreading. The identification of 617 in the UK and Canada has shown the path of its travel.

Genomic studies also help in creating target medicines and vaccines. So far, there is no proven medicine for treating Covid-19. But studies show that existing treatment protocol and vaccines work as effectively against all the existing variants. This is because mutations are only at a particular point, but the vaccine targets several points on the virus. Thus, even if one particular site shows an “immune escape” under laboratory conditions, the vaccine would still be able to target the virus as a whole. For the present, at least. Again, none of the mutations have changed the way the virus has spread, so mask, social distance and hand hygiene work against all. This is for the present. As for the future of infection, que sera sera (what will be, will be).

Variant of Interest show changes in binding to receptor. They could have potential for reduced neutralisation by antibodies generated by a previous bout of infection or vaccination, potential diagnostic impact or predicted increase in disease transmissibility or severity. B.1.617 is mostly considered a VoI, B.1.618 may not even qualify as a VoI.

Variant of Concern is a variant for which there is evidence of increased transmissibility and severity of disease, significant reduction in neutralisation by antibodies from previous infection or vaccination, reduced effectiveness of treatment and diagnostic detective failures. The UK variant is a VoC.