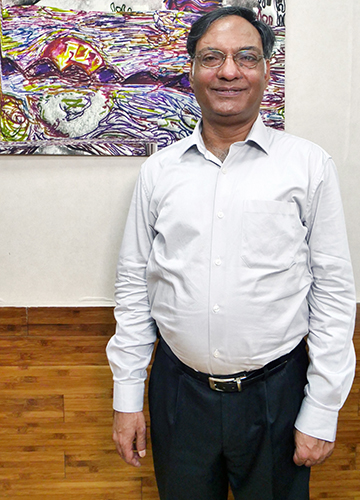 ASHUTOSH SHARMA, who is secretary to the Government of India, heading the department of science and technology, believes that India requires a robust science, technology and innovation (STI) ecosystem since it is an important enabler of economic growth, social welfare and better livelihood.

In an exclusive interview with THE WEEK, he touched upon a range of issues including the opening of the sensitive geospatial sector, the importance of accurate mapping in mitigating the effects of natural calamities like the recent Uttarakhand flash floods and the possibility of a Central subscription plan for science journals and magazines.

Where does India stand globally in STI? Will the new STI policy help us compete with the best in the world?

India is number three in the world in the number of scientific publications, PhDs produced and startups. Our innovation index has made a rapid climb to the top 50. However, quality, relevance and absorption of R&D needs strengthening. It is now widely recognised that scientific advances and innovation are not only promoters of economic growth, but also crucial instruments for socially and environmentally sustainable development. The draft STI policy aims to provide relevant directives to the Indian STI ecosystem in order to realise the aspirations of technological self-reliance and place India among the top three scientific superpowers in the coming decade.

Since STI is an important enabler of economic growth, social welfare and better livelihood for the citizens, a robust STI ecosystem will be of immense benefit. Moreover, a strong emphasis on science communication and citizen science in the STI policy is a timely step to improve participation of citizens in science.

How is the new policy different from previous ones?

The new policy revolves around the core principles of being decentralized, evidence-informed, bottom-up, experts-driven, and inclusive. The aim is to bring in a robust policy governance mechanism incorporating features such as implementation strategy, periodic review, policy evaluation, feedback, and adaptation, and most importantly, a timely exit strategy for various policy instruments. The future looks vastly different than what may have been envisaged even 10 years ago. The policy should work to secure our future against such challenges and disruptions as sustainable development, climate change, environment, energy, rise of intelligent machines and quantum technologies, etc.

Your views on the decision to open up India’s mapping and geospatial sector?

The Survey of India has the mandate of surveying and mapping. Geospatial data includes location information and attribute information and it usually involves information of public interest such as roads, localities, rail lines, water bodies and public amenities. Geospatial data is pervasive, but important. It is important for planning, decision-making, governance and developmental activities. It keeps in mind the security needs of the country and is done in concurrence with security agencies under the ministries of defence and home affairs.

What is its impact on the economy?

The mapping business is worth about Rs20,000 crore a year and it is expected to touch Rs1,00,000 crore in the next ten years. Its impact on the economy would be many times more. The impact of mapping on services, logistics and infrastructure [will be huge]. The geospatial data combines location information, attribute information (the characteristics of the object, event, or phenomena concerned) and often temporal information or the time at which the location and the attributes exist. We need to be accurate in mapping with faster speed across the country, which government agencies alone may not be able to perform. So, we have decided to rope in private players as well. It allows a level-playing field for government and private entities. Moreover, government agencies collect data using taxpayers’ money, and it must be freely shared with private companies at a fair price. It, however, does not include security-related data like what is provided by military establishments.

How did you manage to convince the security agencies?

We have considered security concerns using the best global practices. For instance, there is a negative list of attributes including nuclear reactors and military bases. The guiding principle is, whatever is easily available globally, should not be regulated. Besides a negative list of attributes, the physical access issue has also been taken note of in order to address the concerns of security agencies.

What lessons have you learned from COVID-19?

When COVID-19 came to India, there were not enough PPE kits, ventilators, or diagnostics. We had no capability in India for a mathematical modelling of the pandemic to predict how it will spread, so that one can plan accordingly. Now, we have set up a group of mathematical models that are not just for predictions, but can also play wargames by calculating its impact on the economy.

Can these lessons be found in the new policy?

COVID-19 has impacted almost every sector, and R&D is no exception. India made some outstanding progress in R&D in the last few months. These success stories have unfolded due to an exceptional sharing of purpose, synergy, collaboration and cooperation that R&D institutions, academia, government, startups and industry have demonstrated.

Several compelling lessons have been incorporated in the new STI policy. Some noteworthy ones are dissolving the boundaries among private, public, national laboratories, academic institutions to build strong collaboration for problem solving; more risk taking “profound” research than “incremental” research to achieve multi-fold jump in R&D; promoting time-bound projects to address focused challenges. Aligning R&D with national priorities to solve problems with a focus on “quality” and “relevance” is important. An enabling structure for ambitious missions is to create network of institutions (R&D labs, universities, IITs, industry, startups) in models such as a tertiary web of Hubs, Spokes and Spikes (individual projects that assemble to the big  picture) and others.

There are many rumours and misconceptions about COVID-19. How you are dealing with it to instill confidence in the public?


The Department of Science and Technology contributed significantly to the communication of COVID-19 science to the public on various fronts. Vigyan Prasar’s OTT Channel―IndiaScience has made a large number of programs with experts providing authentic information. DST brought out ‘COVID Katha’, an interactive, online multimedia guide and weakly updates. Mass communication and development of relevant products and scientific studies will continue to serve us in the future as well.

There is a lot of talk about a single Central subscription plan for science journals and magazines. Is it feasible?

No other country as big as India has ever tried such an approach before. This is an important vision to empower every Indian with the power of scientific knowledge. Admittedly, it is a difficult issue, and multiple stakeholders such as publishers and other knowledge producers and consumers need to work together to resolve it. However, the underlying philosophy and direction is clear.

Can the STI policy change the way industry, academia and research institutions work in our country as all of them are working on their own, mostly without any kind of synergy?

The STI policy has formulated an elaborate strategy to build strong bridges among industry, academia and research institutions so that collaborations bring additional and substantial benefits to each one of them and to the country. The policy aims to develop mutual understanding and respect between Saraswati and Lakshmi (knowledge and wealth) for the good of all.

Governments and policies have talked about scientific temper but a majority of the population still lacks it. What do you feel is the reason behind this and how has this been dealt with in the new policy?

One of the basic philosophies of open science is to cultivate a closer relationship between science and society. UNESCO is also working on building an open science framework. STI policy acknowledges the importance of open science. There are important directives such as broader access to publications and data generated from publicly funded research, more broader access to libraries, learning spaces, open education resources, etc. which are mechanisms to cultivate scientific temper among the society. In addition, the bold move of ‘one nation, one subscription’, proposed in the policy is one of its kind initiatives to encourage the citizens to broaden their knowledge of science.

Science communication is important in the development of scientific temper, but people do not take much interest in science-related news. Does the new policy have a solution to improving this?

The policy also encourages citizen science projects for engaging the public into scientific endeavours. An OTT Channel—IndiaScience has been created which is putting out very interesting and useful science programs, even on deep science, but as an engaging, enjoyable, learning experience. Further, effective science communication in India needs easy availability of at least the best of contents in all Indian languages. This is a Herculean task which will be accomplished with a National Mission on Machine Translation, which will use AI.

The draft SSR policy is being formulated and has been submitted for cabinet approval. It focuses on building synergy among all stakeholders in our scientific knowledge community and developing direct linkages between science and society. The aim of SSR is to reach students, farmers, MSMEs (micro, small and medium enterprises), startups and others to empower them with the substantial scientific information, infrastructure and human resources at our command.

Do we have enough mechanisms to prevent yet another flash flood, like the recent one which caused devastation in Uttarakhand?

We do not have enough mechanisms to predict natural calamities like what happened recently in Uttarakhand, but the speed and accuracy of mapping will certainly aid disaster management. I would say early warning by accurate and real time data can mitigate the impact of disaster.