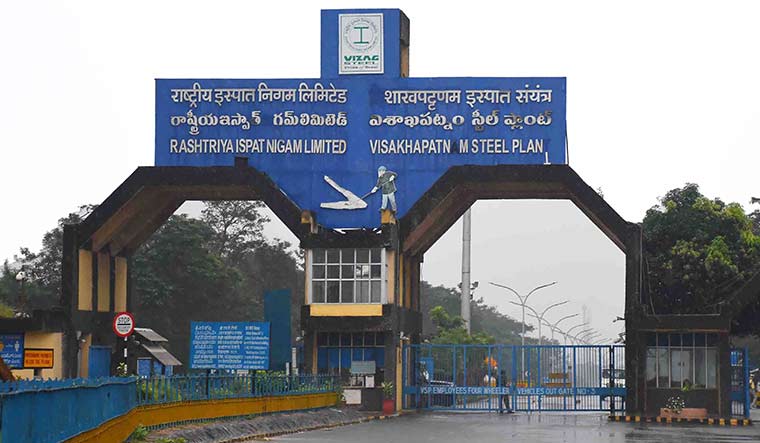 In the eye of a storm: Vizag steel plant in Visakhapatnam.

On the shores of the mighty Bay of Bengal in Visakhapatnam, the upcoming executive capital of Andhra Pradesh is a city within a city. Known locally as ‘Ukkunagaram’, the Vizag steel city is a walled enclave spread across nearly 20,000 acres, with its own distinct identity and culture. Employees and their families from all over the country occupy its 8,000 residential quarters, surrounded by lush green spaces and serviced by well-laid roads and systematically planned structures. But their lives have turned upside down following the decision of the Narendra Modi government to privatise their employer, the Rashtriya Ispat Nigam Limited (RINL) or the Vizag steel plant. The vibrant enclave has suddenly become an island of anger, hopelessness and uncertainty.

“I have lived here for 25 years. I wanted my two children to get jobs at the plant and settle down here. Now, I do not know whether I will be able to keep my own job,” said a 50-year-old skilled worker who is originally from a village in the adjoining Vizianagaram district. Most employees share such concerns. P. Naveen (name changed), who is in his early 30s, has been working at the plant for five years. He grew up in an upper-middle class household in Hyderabad and went to a reputed college. “Here I never felt like living in a typical government quarters and that is the reason why I could adjust. It has a cosmopolitan feel to it.” Unsure of what lies ahead, Naveen is now looking to shift to another city.

The cabinet committee on economic affairs approved 100 per cent disinvestment in RINL in January, and a few weeks later, Finance Minister Nirmala Sitharaman reaffirmed the government’s decision to privatise the plant. The move has raised concerns among its 17,000 permanent employees and 15,000 contract workers. “My mother gave away 23 acres of our farm land for the project in the 1980s,” said Vijay Krishna, an employee. Land for the plant and the township was acquired from more than 16,000 farmers of 60 villages. Krishna is upset that his family’s sacrifice has gone in vain. “Did we part with our land so that some private player can turn it into a real estate venture and make huge profits? What am I left with? I have two daughters of marriageable age and I know that I will be among the first ones to be sacked as I am old and can be easily replaced,” he said.

The employees have set up a Joint Action Committee (JAC) comprising 26 unions and associations to oppose privatisation. They have launched a relay hunger strike which has now crossed 30 days. Bike rallies and public meetings are being held in Visakhapatnam and in other parts of Andhra Pradesh. The JAC has invited students, teachers, professionals and people from all walks of life to join them. The unions have served strike notice to the management, warning that they will intensify their agitation from March 25 if their demands were not met.

“The Centre did not spend a single rupee on the plant for the last 10 years,” said Ayodhya Ram, a senior employee of the plant and convener of the JAC. The initial capital investment was Rs4,890 crore. The Centre and the state government have recouped Rs43,000 crore so far in the form of dividends and taxes,” said Ram. “When the plant has provided employment to so many people and has created assets, why does the Centre want to sell it?” 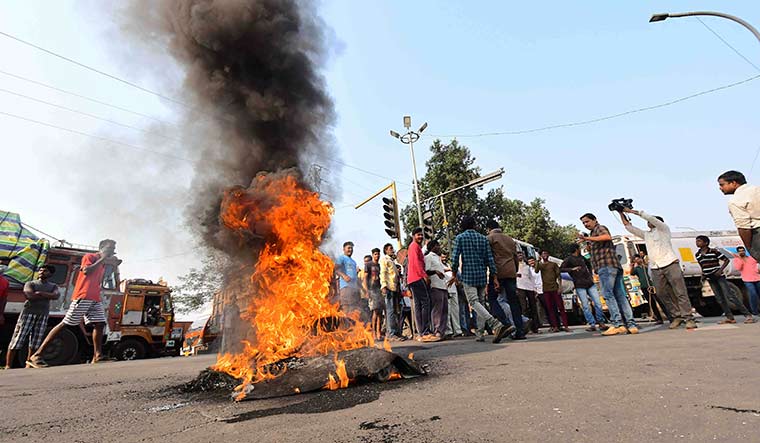 Steely resolve: Protests in Visakhapatnam against the privatisation of Vizag steel plant.

Ram and others who oppose privatisation also have an emotional connect to the plant because of its history. In 1967, as many as 32 people died in police firing while protesting against the Central government’s reluctance to sanction the nation’s fifth steel plant in Andhra Pradesh. At the time, 67 MLAs and 7 MPs resigned in support of the demand, and the slogan “Vishaka Ukku, Andhrula Hakku” (Vishaka steel is Andhra’s right) reverberated across the state. A large number of farmers surrendered their land, which was seen as an act of sacrifice for the development of the state. In 1971, prime minister Indira Gandhi laid the foundation stone for the project.

The plant became operational in 1991 with a capacity of 3.3 million tonnes (MT) per year. With three blast furnaces, the annual production now is 7.3 MT. Yet, the plant has never been allocated a captive mine, forcing it to procure iron ore at market price, which is three times more expensive. With the steady rise in the price of iron ore, the plant now has a debt of more than Rs21,000 crore, reporting losses for the past six years.

Y. Siva Sagara Rao, former chief managing director of RINL, wrote recently to the prime minister that the plant could be saved by merging it with the Steel Authority of India Limited and the National Mineral Development Corporation to form a steel giant. He said resource sharing would decrease the cost of raw materials and would increase production. “In our country, 112 MT of steel is produced annually, of which only 18 per cent is from the public sector. This is a very small share and the government does not have much control,” said Rao. “It is not good to let the private sector control the industry. If the Centre implements my proposal, the production of steel by the government can go up to 30 per cent and it can break the [private sector] monopoly.” 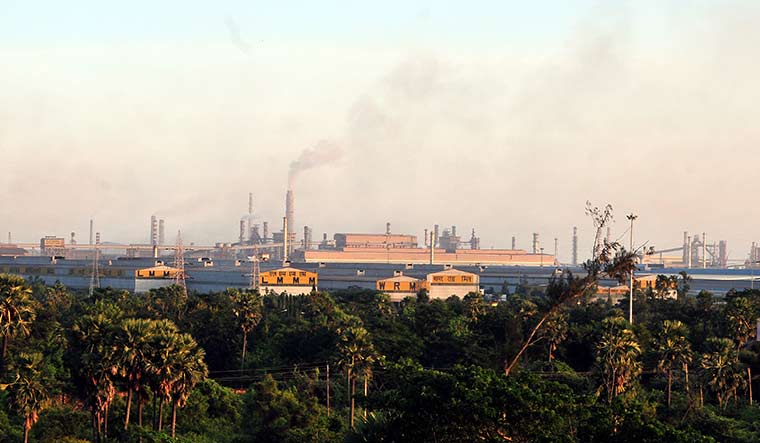 Chief Minister Y.S. Jagan Mohan Reddy has written to the prime minister to consider measures to revive the plant, which include allotment of captive mines and financial restructuring. Yet another proposal is to monetise the land owned by the company as it sits on a real estate goldmine. According to local developers and property dealers, each acre under RINL could fetch up to Rs10 crore. The entire land bank, according to market estimates, is worth more than Rs1.5 lakh crore. Employees fear that private players might be more interested in capitalising on the land than running the plant.

It is not just the employees who are concerned about the plant’s privatisation. Union leaders say more than two lakh people are indirectly dependent on the plant. Shops specialising in mechanical and industrial spare parts dot the areas on the periphery of the township. There are also stores catering exclusively to employees who stay outside the township.

Interestingly, the issue has brought together bitter political rivals—the ruling YSR Congress and the opposition Telugu Desam Party (TDP). Jagan is planning to lead an all-party delegation to meet Modi on the issue. Local BJP leaders are on the back foot in the face of the public opposition. The BJP’s local ally, the Jana Sena Party of actor Pawan Kalyan, too, is finding it difficult to back the disinvestment decision. The bigger political question, however, is whether the YSRCP will take an aggressive stand against the Centre or continue to have cordial relations.

Political analyst Telakapalli Ravi said the issue would prove to be a major setback for the BJP. “The party will never be accepted in Andhra Pradesh after this. The people are already upset with the BJP for not granting special status to the state. Its decision to sell the plant will only add to the negative image. Pawan Kalyan, too, will find it hard to convince his followers to keep the alliance intact,” he said. Ravi, however, pointed out that Jagan is unlikely to risk a confrontation with the Centre. “He cannot afford to do so. He has not made any negative comments against the BJP.”

The JAC is roping in national trade union leaders, farmer leaders and celebrities to join the fight. Telugu superstar and former Union minister Chiranjeevi has tweeted in support of saving the steel plant. Support has also come in from neighbouring Telangana. Information Technology Minister K.T. Rama Rao, who is the son of Chief Minister K. Chandrashekar Rao, has expressed solidarity with the protesting employees.

“The sale of public sector companies hardly ever attracts much public support and sympathy. But that is not the case with us,” said Narsing Rao, chairman of the JAC. “This government is trying to privatise the agricultural sector and the industrial sector. We want to make Vizag the centre of the fight against the privatisation policy of the government.”