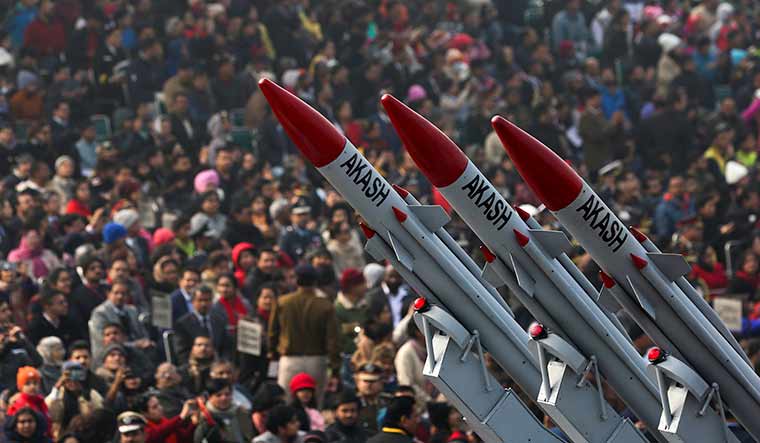 IN FEBRUARY 2020, Prime Minister Narendra Modi set a target for Indian defence exports: $5 billion by 2024. Last month, the Union cabinet cleared the export of Akash missile systems and formed a high-powered panel to grant swift approval to export military hardware. Besides Akash, surface-to-air missile systems, the BrahMos supersonic cruise missile and larger weapon systems can now be sold to “friendly foreign” nations that have a robust system to manage these assets. It will also help improve strategic ties with them. Until now, India has only exported ordnance and smaller armaments.

Experts believe that apart from Akash and BrahMos, other missiles like Prahaar and the air-to-air Astra have huge export potential. Astra, which has a range of 100km, is now entering the production stage after completing successful trials from the Sukhoi Su-30MKI jet. Two things hampered the sale of indigenously developed missiles: the lack of effort to sell and a strong lobby of First-World nations that dominates defence markets. India also lacked a policy to push defence exports, despite defence scientists seeking export permission since 2005.

Interestingly, from 2015 to 2019, India was the world’s second-largest importer of weapons, after Saudi Arabia. India imported 9.2 per cent of the arms produced globally. India did though manage to export defence equipment worth Rs10,745 crore in 2018-19, seven times the figure in 2016-17.

According to an observer in South Block, efforts are on to fast-track the long-promised sale of BrahMos and Akash to Vietnam. This deal with China’s neighbour is also a clear message to Beijing.

Four decades on, the Philippines, Indonesia, Vietnam, the UAE, Bahrain, Saudi Arabia, Egypt, Kenya and Algeria have expressed their interest in the Akash, which is capable of targeting aerial assets within a range of 25km. The missile was inducted into the Indian Air Force in 2014 and the Army in 2015. Defence officials claim that Akash is around 50 per cent cheaper than its competitors. Other Indian systems like radars and sonars, too, cost only a quarter to one-fifth of similar systems available in the global market. All export versions will be different from the ones inducted into the Indian armed forces, as no country sells the best variant.

The 290-km range BrahMos, which has a range of 290km, is being eyed by Indonesia, the UAE, Saudi Arabia, South Africa, Vietnam and the Philippines. All formalities have been completed with the Philippines—including a green light from Russia, as the missile development project was a joint venture—and the matter is awaiting final approval from the cabinet committee for security.

William Selvamurthy, a scientist who served as chief controller of research and development at the Defence Research and Development Organisation, says that India was running First World industries because it has the world’s fourth-largest air force and its requirements are huge. “There was a lot of pressure on India to not develop missile systems,” said Selvamurthy. “Countries dominating the field of missile technology do not want any other player in the global market. They had put restrictions under non-proliferation treaties.” He said India is now strong enough to make a decision. “With selling missiles, we will be competing with the US, Russia and other European nations,” he said.

Retired Air Vice Marshal P.K. Srivastava, who served in Bharat Dynamics Limited (BDL), the manufacturer of the Akash, says that it took close to 20 years for the missile to reach this stage. It took a lot of time to progress from design drawing to production drawing, he said, followed by about 1,000 corrections and modifications before it was finally inducted into the armed forces. So far, the armed forces have ordered Akashs worth Rs24,000 crore; a Rs10,000-crore contract is in the works.

“Initially, we (BDL) wanted to set up the whole supply chain by involving private players and go for bigger numbers later,” said Srivastava. “I feel the time is now ripe for us to (export). We must pitch Akash as the cheapest in its category. We can give Israel a good fight, which also sells cheap military platforms in the segment.”

He added that there was no policy to export as India never intended to sell. “We always had the capacity, but never thought of exploiting it,” he said. As talks are on about upgrading the Akash to the Mk-II variant, the Mk-I can be safely sold.

On the export potential of BrahMos, India is considering multiple options. A. Sivathanu Pillai, architect of the BrahMos missile, told THE WEEK that the priority was to first meet the requirement of Indian defence forces. During his tenure as chief of BrahMos, nearly 14 countries expressed interested in the missile.

Pillai said that as India is now a member of the Missile Technology Control Regime (MTCR), it can sell missiles with a range beyond 300km. “We are definitely interested in exporting, but not the best systems,” said Pillai. “In the case of exporting the Akash, of which other versions are available, there should not be any issue. But while exporting a BrahMos-type missile, which is a ‘winning weapon’, we need to be careful.”

BrahMos NG, which has a limited range, can be exported, he said. The BrahMos’s range is now being extended to over 400km; efforts are under way to test an 800km variant by the end of this year. The Indian armed forces have placed a Rs36,000-crore order for the BrahMos.

Pillai also highlighted an additional issue: “If we go in for exports, our priority may be shifted because of multiple government-to-government agreements. Our mind will be diverted if the focus is on selling.”

Former DRDO scientist Ravi Gupta partly blames the armed forces for preventing exports. He said unless a weapons system is inducted in significant numbers at home, external buyers will not trust the platform. “Sadly, we were the only country in the world which was working against its own national interest,” said Gupta. “In India, the induction of a military platform takes more time than its development.” He added that because of huge kickbacks in defence deals, the indigenous sector did not get the desired attention.

The situation is changing fast as many indigenous platforms, including the recently approved Tejas light combat aircraft, have been ordered for the armed forces. There is an effort to cut imports and bring the indigenous defence industries together to meet the demand at home.

Defence scientists have maintained that India is considerably self-reliant, and that once we start exporting, a market will be formed outside and private players can also join. “Not only defence PSUs, but private sectors of the Indian defence industry, too, have grown,” said Selvamurthy. “The ecosystem has changed and it is time to go in for exports.”