Puducherry politics is going through a turbulent period 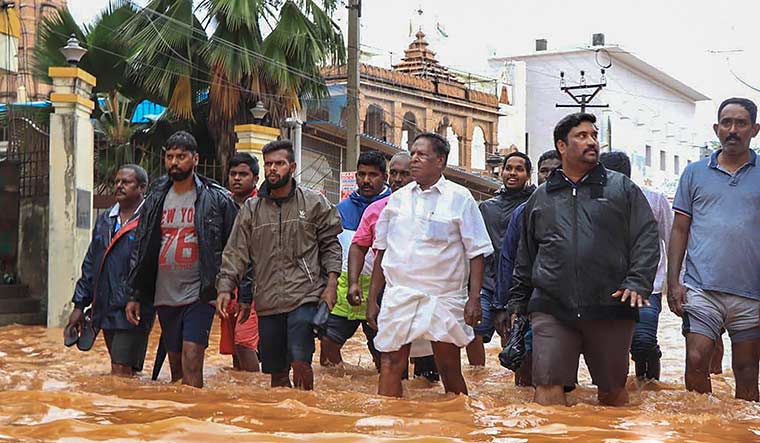 EARLY IN THE MORNING on February 22, even as Puducherry was recovering from flash floods caused by heavy rainfalls a day before, iron barricades were being put up on the water-logged roads leading to the legislative assembly. The eerie silence surrounding the French colonial style building, guarded by a large posse of policemen, was broken only by the chirping of the birds from the nearby Bharathi Park. Soon, MLAs and ministers started arriving at the assembly complex, as the Congress government led by V. Narayanasamy was seeking a vote of confidence.

Clad in a white dhoti, a crisp white shirt and a shawl in Congress colours, Narayanasamy looked determined, sending out a message that he will not give up without a fight. As the assembly session started, the chief minister made an impassioned speech listing the achievements of his government. He criticised the BJP and the All India N.R. Congress led by opposition leader and former chief minister N. Rangaswamy for their attempts to topple his government. “Kiran Bedi (who was replaced as lieutenant governor on February 18) and the Modi government entered into a conspiracy to ensure the fall of our government,” he said. He accused the BJP of committing “political prostitution” and blamed it for “unpopular” schemes like demonetisation.

Narayanasamy’s comments on demonetisation led to chaos in the assembly as the opposition benches rose in protest against the attack on Prime Minister Narendra Modi. “This is not a public meeting,” said A. Anbalagan, legislature party leader of the All India Anna Dravida Munnetra Kazhagam. But it did not stop Narayanasamy who said Bedi interfered in his administration “on the instruction of her bosses in Delhi”. As the confidence motion was taken up for voting, he said the three MLAs nominated by Bedi without consulting the council of ministers should not be allowed to vote and walked out with his MLAs. A while later, Speaker V.P. Sivakolundhu announced that the motion was defeated. “The speaker is the BJP’s stooge,” said chief whip R.K.R. Anantharaman. Rangaswamy, however, blamed the Congress leaders for the party’s defeat. “They have lost the confidence of the people as they did not work for their welfare,” he said. 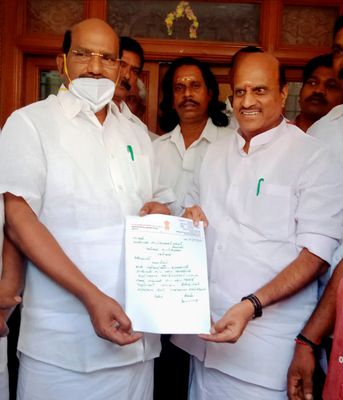 The Narayanasamy government went into crisis mode in mid-January after minister A. Namassivayam and MLA E. Theeppainthan resigned and joined the BJP. Soon more MLAs—Malladi Krishna Rao, A. John Kumar and K. Lakshmi Narayanan of the Congress, and K. Venkatesan of the Dravida Munnetra Kazhagam (DMK)—also quit, bringing down the strength of the Congress-DMK alliance to 12 in the 30-member assembly. “The BJP lured them by offering money,” Narayanasamy told THE WEEK in an exclusive interview.

Sources told THE WEEK that one of the resigned MLAs had debts close to Rs2 crore and that he got the BJP’s help to settle the dues. Another MLA who ran a private lottery and a cable TV business came under the scanner of the income tax department. “He was shaken as he was summoned by the IT department to Chennai. He rushed to Delhi to bail himself out of the crisis and soon came his resignation,” said a senior Congress leader.

Dinesh Gundu Rao, Congress in charge for Tamil Nadu and Puducherry, said Union Home Minister Amit Shah threatened the MLAs and also made them huge offers. The BJP, however, denied that it was behind the ongoing crisis. “The BJP did not offer anyone anything. We have no role in the crisis,” said state BJP president V. Saminathan, who was nominated as an MLA by Bedi. He had contested the 2016 elections and got only around 1,500 votes.

The 30 assembly constituencies in Puducherry are spread across four districts–Puducherry, Karaikal, Yanam and Mahe. The Congress has a strong presence in Karaikal, Mahe and Yanam and the BJP seems to have a well thought out strategy to target the Congress strongholds. It has made a calculated political move by replacing Bedi with Telangana Governor and former Tamil Nadu BJP president Dr Tamilisai Soundararajan. The decision seems to have been influenced by its assessment that the Congress and Narayanasamy have been gaining sympathy among the public ahead of the assembly elections because of the aggressive role played by Bedi. Bringing in the Tamil-speaking Soundararajan will help blunt the Congress attacks about an ‘outsider’ targeting local leaders.

Narayanasamy, who was hoping to deflect the anti-incumbency factor by blaming Bedi, no longer has that option. Moreover, he will have to beat back the challenge of his erstwhile colleagues like Namassivayam, Krishna Rao and John Kumar. The Congress, which suffered a split in 2011 when Rangaswamy walked out to form the N.R. Congress, cannot afford to lose more leaders. Its chances in the upcoming polls depend on gaining the sympathy of the voters by convincing them that it was the victim of unscrupulous political practices engineered by the BJP. The party also suffers from the apathy and neglect of its central leadership. No national leaders had visited Puducherry after Narayanasamy took over in 2016, till Rahul Gandhi came on February 17 to kickstart the party’s election campaign.

The Congress also needs to ensure that the DMK remains a part of the alliance. “We do not have any issues with the DMK as of now,” said Gundu Rao. “We had issues when [DMK leader] S. Jagathrakshagan said the party would contest all 30 constituencies. All that has been sorted out and the DMK continues to be in our alliance,” he said. But the DMK has been largely indifferent to the Congress’s recent woes. It suspended its defected MLA K. Venkatesan only a day after he submitted his resignation. Moreover, the party has refused to expel him. DMK president M.K. Stalin has been silent on the developments and issued a statement only on the day Bedi was removed. But he did not blame the BJP for the political crisis, although he said the DMK would fight the elections in the company of the Congress after Narayanasamy lost the trust vote.

As far as the BJP is concerned, the recent political developments have given it an opening in Puducherry, where the party has only a negligible presence. In 2016, BJP candidates lost their deposits in all the 18 constituencies they contested in. But with president’s rule—which could even go on for up to six months—a possibility in the light of the recent political developments, the party will be able to set and control the agenda, especially with someone like Soundararajan in the Raj Niwas. The BJP will also use this opportunity to assess the viability of forming a government in alliance with the N.R. Congress, the AIADMK and the Congress rebels. But it has so far been unsuccessful in this endeavour.