Rogue rock and a deluge

The Chamoli disaster stresses the need for better monitoring of glaciers 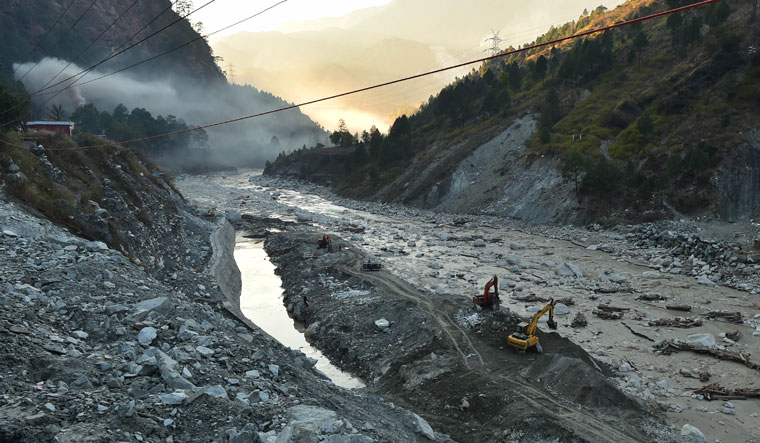 Some time ago—a week or earlier, we do not know yet—a chunk of rock around 400m in diameter broke off from its parent mountain in the Nanda Devi range of the Garhwal Himalayas, about 5,600m above sea level. It hit an overhanging glacier a few metres below. Unlike glaciers that form on valleys, overhanging glaciers are more unstable, formed over rocks jutting out of a mountain slope. Together, rock and ice tumbled down, snowballing into a huge mass. Close to where this event occurred is a larger glacier, one which has been surveyed and named Raunthi glacier, which feeds the Raunthi stream below it. The tumbling avalanche fell into the stream at a height of 3,500m above sea level, damming it temporarily and creating a lake. The entire situation was precipitous and the dammed-up water was building up in pressure. To add to the instability, there was fresh snowfall. The inevitable happened on the morning of February 7, as the water burst through the embankment. Down the narrow gorge, the ephemeral lake emptied itself, sending a volley of material from the embankment, too.

This was the flash flood that hit the Chamoli area at around 10am, washing away two power plants and claiming at least 30 lives. Over 170 people are missing.

A team of five glaciologists from the Dehradun-based Wadia Institute of Himalayan Geology (WIHG) headed off to the city of Joshimath in Chamoli district the next day. Though they did not reach the glacier, which is in an inaccessible area, they took pictures of the area from a helicopter. They also studied satellite maps, and added it to what they saw and analysed, before coming up with the sequence of events that led to the flood. “This is just the preliminary report,” says Kalachand Sain, director, WIHG. “We have many unanswered questions. We are still studying the event.” The conclusions the team reached was because they noticed a fresh scar on the mountain and guessed that that was where the rock broke off. They are studying satellite images of the area to get a better idea of when it happened.

Observers feel that the rock fall may have happened recently, perhaps just a day or two before the flash flood. “Anything earlier than that would have been picked up by satellite imagery,” says Naresh Kumar, former director of DRDO’s Snow and Avalanche Study Establishment.

The first question that came up immediately after the event was whether the construction activity downhill caused the rock to break off. Scientists are cautious with their response, and say a lot more has to be studied before they can conclude whether the rock break was a natural event or anthropogenic in nature. Sain notes that the incident occurred several thousand metres above the Tapovan region, where the power plants are. Other scientists, too, believe that the development work is unlikely to have triggered the rock break. The project is more the victim than the perpetrator, says Anjal Prakash, research director, Indian School of Business, Hyderabad, and lead author of the sixth assessment report of the Intergovernmental Panel on Climate Change. “However, it is a lesson for the need of greater impact and risk assessment for any infrastructural project,” he says.

The incident baffled the scientific community, especially since it was first called a “glacier burst”, which is usually unheard of during the winter months when snow is still accumulating. The initial theory was that of a GLOF (glacier lake outburst flood), and while the incident above is technically that of a lake outburst, it was not an old, established lake, but a very recently formed and unstable one. There is even a sabotage theory, and scientists say that all theories are possible, but there needs to be evidence to back them.

The Himalayas are a very vulnerable landscape. As earth’s youngest, tallest and still-growing fold mountains, they are also the most populated mountain region, supporting 1.3 billion people. Plate tectonics, which keep pushing the mountains higher, also cause massive temblors, and regular rockfalls, landslides and avalanches. The higher reaches are glaciated. There are so many of them, large and small, that neither is there a proper count, nor have most been surveyed.

Despite a lot of interest and research, the sheer vastness of the landscape and its unapproachability means that these realms have not yet been properly surveyed. Only a handful of glaciers—important ones like Gangotri—are monitored regularly. There might be several glacier lakes, even subsurface ones, that might not be picked up by satellite imagery, explains A.P. Dimri from Jawaharlal Nehru University’s School of Environment Science and member of the international Hindukush Himalayan Monitoring and Assessment Programme. Within India alone, the snowy Himalayas stretch across 2,500km and have around 10,000 glaciers. “It is not possible to study them all,” says Sain. This icy landscape, where the air is thin and there is no human habitation, holds deep secrets. Naresh Kumar says that one such question is why there are more such incidents on the Garhwal side of the mountains and not in the Himachal and Kashmir region.

While it is tempting to point the finger of blame on climate change, the villain of the age, scientists urge caution, saying the facts must come out first. The Himalayas are vulnerable to climate change. There are many scientific papers which show how rising temperatures have caused glaciers to shrink and upset the fine climactic and geological balance in the Hindukush Karakoram Himalaya (HKH) region. The region is known as the “third pole” as it has the largest reserves of fresh water after the Arctic and Antarctic.

The Indian Space Research Organisation studies show that 75 per cent of the glaciers are retreating “at an alarming rate”. While the jury is still out on whether this particular incident is also a victim of climate change, Prakash points out that there is no ambiguity about the fact that the region requires better monitoring and assessment. A distinct feature of a climate change event is that it occurs when and where it is least expected to. Thus, had the region been monitored well, and had there been a warning system in place, perhaps the loss of lives from the flood could have been minimised. Easier said than done, though, given the vastness of the landscape and the limitations on funding.

The incident also brings into focus the delicate balance of development and conservation. Uttarakhand Chief Minister Trivendra Singh Rawat was quick to note that it is wrong to blame development of the region on the incident. Given that the Himalayas are among the poorest regions in the world, and that the development requirements of the people are great, such issues are going to pop up with every incident.

“We need to think of even lesser impact projects, now,” says Prakash. “Hydel power could be generated at lower scales through several run-of-the-river turbines, each lighting up a few villages. I have seen this being done in Nepal.” Alternatively, he suggests greater thrust be given to solar and wind energy generation in these areas.

However, in these geologically unstable regions, the issue is not just about the impact of a project on the ecology. It is also about having a system of early warning and evacuation when an incident occurs. In this case, had that rock fall been noted when it occurred, scientists could have calculated the risk of it triggering an avalanche or flash flood and sent warnings to people downhill. But then, how possible will it be to monitor this vast ice land in real-time?