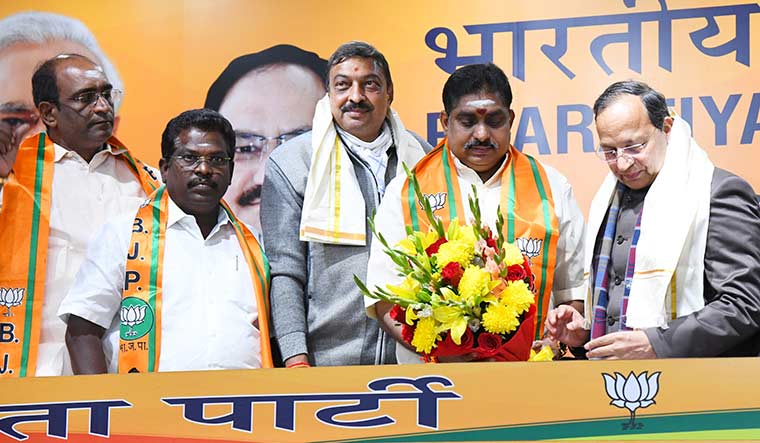 Changing colours: A. Namassivayam (second from right) and other leaders join the BJP in the presence of the party’s national general secretary Arun Singh in Delhi | Sanjay Ahlawat

ON JANUARY 18, S. Jagathrakshagan told DMK cadres that he would end his life if he failed to win all 30 constituencies in the upcoming Puducherry assembly elections. The Arakkonam MP, who was recently made the party’s election in-charge in Puducherry, launched a scathing attack on the Congress government, blaming it for the lack of jobs in the Union territory. “Puducherry should have been turned into heaven by now,” he said. “Under the leadership of M.K. Stalin, the DMK will form the government.”

The rift between the alliance partners—the DMK and the Congress—was out in the open. A few days later, Public Works Department Minister A. Namassivayam and MLA E. Theepainthan left the party. They joined the BJP in the presence of Union Home Minister Amit Shah and BJP president J.P. Nadda in Delhi.

Namassivayam’s rebellion within the Congress had begun as early as 2016, when he lost the chief minister’s chair to V. Narayanasamy. Though he was a senior leader and minister, Namassivayam had been upset with Narayanasamy’s way of functioning for quite some time.

Defections are not new to the Puducherry Congress. A decade ago, the party was split when N. Rangaswamy quit to form his own N.R. Congress. However, the Congress remained powerful in the region. “There is no loss for the Congress,” Narayanasamy told THE WEEK. “Namassivayam does not have a strong following even in his own constituency.”

However, the defections just months before the elections would hurt the party. Sources said that many others, including Health Minister Malladi Krishna Rao and a few legislators, including A. Johnkumar—who had vacated his seat for Narayanasamy in 2016—are in touch with the BJP. Also, highly placed sources in the Congress said that MLAs K. Lakshminarayanan and V. Vijayaveni could jump ship any time. 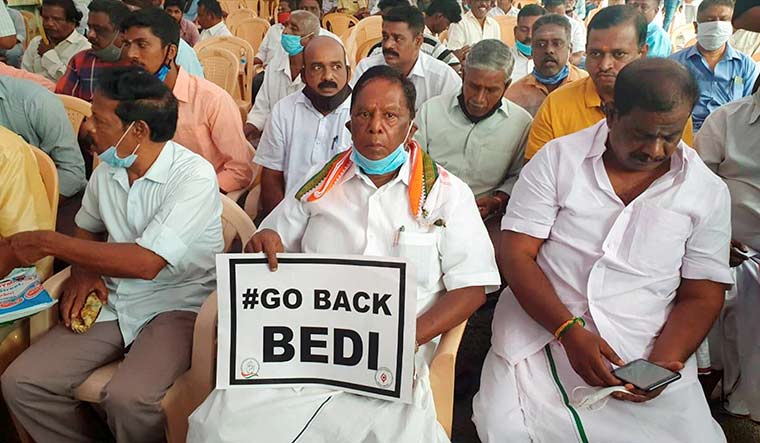 Apparently, the legislators feel suffocated in the Congress. “The chief minister does not let anyone function independently,” Namassivayam told THE WEEK. “None of the grievances I aired were addressed. I was left with no option.” He had written a letter addressing his complaints to the party leadership; it was reportedly ignored.

Namassivayam had played an important role in building up the Congress in Puducherry and once headed the UT unit. Sources said that though he did not have a strong vote base, the BJP might field him as chief ministerial candidate.

According to sources, it was BJP national general secretary B.L. Santhosh who conceived and executed the defections. Apparently, one of his confidants, Nirmal Kumar Surana, had been camping in Puducherry for the past seven months, holding meetings with ministers and MLAs.

“The idea is to bring a BJP government in the Union territory and reduce the Congress to the maximum possible extent,” said a Congress leader in Puducherry on condition of anonymity. “The DMK will also go with the BJP if the Congress loses.”

He said the friction in the alliance began in October 2020 and has been simmering. Narayanasamy, Puducherry Congress president A.V. Subramanian and Lok Sabha member V. Vaithilingam had reportedly briefed the Congress leadership in Delhi about this many times. The trio had also informed the leadership about the emerging cracks within the party, the possible defections, and also the strained relationship between the UT government and Lieutenant Governor Kiran Bedi.

On January 24, when Rahul Gandhi visited Tamil Nadu and Puducherry, Narayanasamy held a closed-door meeting with him for several hours. “Rahul Gandhi said that he will take a call at an appropriate time,” said Narayanasamy.

Apparently, Bedi had become a thorn in the side of the government ever since she became lieutenant governor in 2016. On January 8, leaders of the Congress-led ruling coalition protested against Bedi. There were placards saying “Go Back Bedi” and even Narayanasamy sat in the protest. “She is not allowing an elected government to function,” said the chief minister. “She interferes in the day-to-day administration of the government.”

The Congress organised such protests twice in January.

“I am not meddling in the administration,” Bedi told THE WEEK. “As an LG, it is my duty to ensure that the government is run for the welfare of the people.”

Bedi’s intervention aside, there seems to be strong anti-incumbency against the Congress government. There is buzz that there might even be attempts to topple the government, citing lack of numbers in the assembly, before the election dates are confirmed. Of the 30 seats in the assembly, the Congress holds 12, the DMK three, and an independent, one. The opposition camp has 11—the N.R. Congress seven and the AIADMK four. Three seats are vacant—two because of the recent defections and one because a Congress MLA was disqualified for anti-party activities last year.

So, there could soon be a situation where the numbers do not add up for the Congress. Narayanasamy and Speaker V.P. Sivakolundhu, however, said that there was “no threat” to the Congress government. “People who enjoyed power for four and a half years have left the party for their own interests,” said Narayanasamy. “The people of Puducherry will know what to do with them. People who join the BJP in Puducherry and Tamil Nadu will lose their political relevance.”

The BJP, however, might not be the biggest problem for the Congress. The strained relationship with the DMK could be its downfall.

Though Stalin said that the alliance was intact and that Jagathrakshagan’s was just an emotional speech, the DMK, notably, did not take part in the protests against Bedi, despite being invited. Sources even said that if the DMK wins more than 10 seats in the upcoming elections, it might join hands with the BJP to form government.

Apparently, Jagathrakshagan, who is seen as the DMK’s moneybag, would be the party’s chief minister choice. Sources said that the DMK wants to reduce the Congress’s influence within the alliance in Tamil Nadu; it has just begun the game from Puducherry.