Vote of no thanks 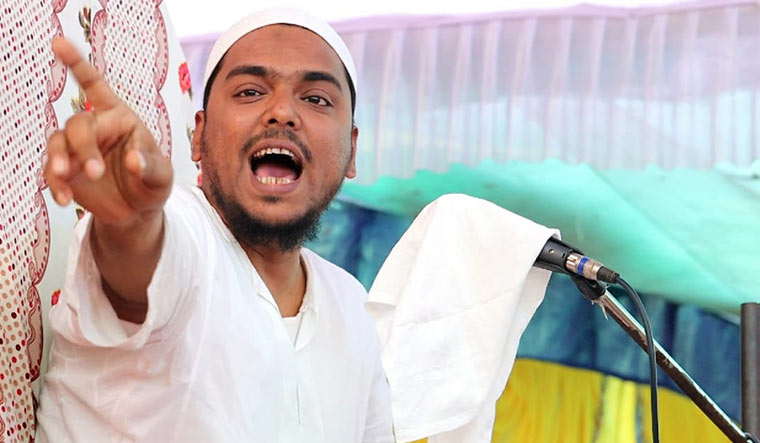 New challenge: Abbas Siddiqui, an influential religious leader, has been bashing Mamata for not doing enough for Muslims.

WITH JUST MONTHS left for the assembly elections, West Bengal Chief Minister Mamata Banerjee stares at the possibility of losing a community she claims to have nurtured well.

At the forefront of the possible political realignment stands Furfura Sharif of Hooghly, a powerful Muslim shrine that had swung the community’s vote into Banerjee’s kitty in 2011.

Muslims in Bengal, who form close to 30 per cent of the population, largely follow either of two religious institutions—the Jamiat Ulema-e-Hind (which conforms to the Deobandi ideology) and Furfura Sharif.

While followers of the Jamiat Ulema-e-Hind are found mostly in Kolkata, Howrah, a small part of North 24 Parganas and the two Dinajpur districts in north Bengal, Furfura Sharif holds sway in south Bengal—in districts such as Hooghly, Burdwan, Murshidabad and North and South 24 Parganas—which account for 120 of the 294 assembly seats.

The followers of Furfura Sharif vastly outnumber those influenced by the Jamiat, whose leader in Bengal, Siddiqullah Chowdhury, is a minister in Banerjee’s cabinet.

The strongest challenge to Banerjee comes from Abbas Siddiqui, a pirzada (religious leader) from Furfura Sharif, who has been holding congregations in remote villages of south Bengal and bashing her for not doing enough to uplift the community.

Siddiqui first saw red when eight Trinamool Congress Lok Sabha members were absent during the voting on the Citizenship Amendment Bill last year. He had asked then why the chief minister had sent “such girls to Parliament who are useless?”He was referring to two of the MPs who were actors.

Siddiqui, in his early forties, has been in touch with the Election Commission and hopes to launch a party in December. But even before that, he had put forward the idea of an alliance with Banerjee, asking for 44 seats.

The All India Majlis-e-Ittehadul Muslimeen (AIMIM) had also offered support in exchange for 50 seats. Said party state in-charge Syed Zameerul Hasan: “Ninety-four seats (AIMIM plus Siddiqui’s party) are nothing compared with the anti-incumbency she is facing. If she agrees, she can get the complete Muslim vote and defeat the BJP.”

The negotiations are on, but Banerjee is apparently reluctant to share. “She wants all the power,” said Hasan. “Let the Bihar elections end. We will then have a final word with the TMC. Our party president will then decide the final course of action. Banerjee is not trustworthy.” While the Asaduddin Owaisi-led AIMIM has not started its public campaign, it has been quietly contacting Muslims in the state for a year.

Siddiqui, however, has not been so subtle. His congregations are openly political. In the past six months, he has conducted more than 40 rallies in North and South 24 Parganas.

“I do not need her (Banerjee),” he said. “I have told her that if she wants to keep the BJP at bay, she must come to an understanding with my party.”

Traditionally, Furfura Sharif leaders had been close to the Communist Party of India (Marxist) after independence. The shift happened because of the Sachar committee reports of 2006, which painted a bleak picture for Muslims in Bengal. The leaders then sided with Banerjee in the next elections in the hope of a better future.

Siddiqui and his followers, however, believe that she has not done nearly enough. “For the past 10 years, the chief minister has done nothing good, not only for the Muslims, but also the poor dalits and adivasis,” said Siddiqui. “In fact, we are worse than before.”

Muhammad Yahya, chairman of the Bengal Imams’ Association, agreed that there had been “hardly any change” in the past decade, but added, “At this moment, I doubt the efficacy of any political outfit emerging for Muslims as we face other threats. It is difficult to become successful.”

That Siddiqui was a threat to Banerjee became evident when Trinamool workers reportedly attacked his congregation in Bhangar (South 24 Parganas) last month. “Yes, he speaks on politics in his religious meetings, and there can be arguments made against it,” said Mosharaf Hossain, a social activist in Bhangar. “But, no one should forget that he is our religious guru. People have not taken the attack on him lightly.”

In that light, Siddiqui told THE WEEK that if he did not reach an understanding with Banerjee, the chances of which seem high, he would put up candidates in most Muslim-majority constituencies.

“You call her a Muslim lover,” he said. “But the way she tortured my Muslim workers and throttled democracy in Bengal is beyond imagination. I do not think after this [attack] there would be any chance of an alliance.”

What about an alliance with Owaisi? “I have respect for him,” said Siddiqui. “But a decision on an alliance will be taken after I consult my party.”

Not all in Furfura Sharif are happy with Siddiqui’s moves. “What he is doing is will help the BJP,” said his uncle, Toha Siddiqui. “How could he do that? We are totally frustrated.” He said that while some people do understand that Siddiqui might split the Muslim vote and help the BJP, a majority of Muslims in the rural belt still support him.

“Perhaps,” said Hossain, “they are more concerned about the corruption during Cyclone Amphan, handling of the pandemic and lack of development than the emergence of the BJP.”

Sources said Siddiqui would string together an alliance with the AIMIM, various adivasi organisations in Bengal, particularly in Burdwan, Birbhum and North and South 24 Parganas. The AIMIM would field its candidates in the northern districts.

In pre-independence India, the Muslim League had successfully brought together Muslims and downtrodden Hindu castes. “Those times were different” said Yahya. “Today is sharply different from those times—politically, historically and geographically.” He added that the dalits of today might not respond to the call for an alliance with Muslims.

CPI(M) Polit Bureau member Mohammed Salim said that, for any talks to take place, Siddiqui would first have to assure them that he would not ally with either the Trinamool or the BJP.

As the Trinamool currently controls the Muslim vote, a dip of even 5 to 10 per cent in the community’s support would land Banerjee in trouble. And she knows that. A few months ago, Banerjee started giving stipends to Hindu priests and doles to Durga Puja committees. She had earlier given money to Muslim clerics, but this was routed through the state waqf board.

“How can she give money from the government exchequer to Hindu priests or any other religious heads?” said Siddiqui. “Our Imam did not beg her. They are getting their rights from waqf properties.”

Siddiqui has a clear agenda for Bengal. He will campaign for a liquor ban, death sentence for rapists and the handing over of Muslim and adivasi properties to the communities. “Muslims are not even recruited in government madrassas in Bengal,”said Siddiqui. “For long, [Banerjee] has been hitting us with the fear of the BJP. Those days have ended.”