India commits to closer defence cooperation with the US 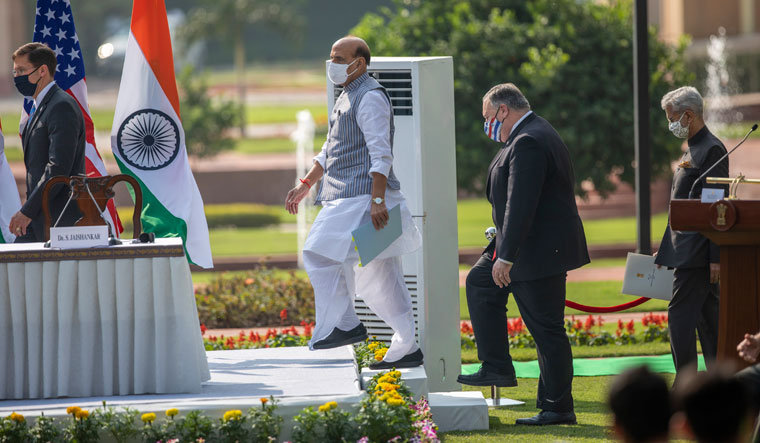 Hours before attending the 2+2 dialogue with Defence Minister Rajnath Singh and External Affairs Minister S. Jaishankar, US Secretary of State Mike Pompeo and Secretary of Defence Mark T. Esper visited the National War Memorial in New Delhi to pay tribute to India’s fallen heroes. “We visited the National War Memorial to honour the brave men and women of the Indian armed forces who sacrificed for the world’s largest democracy, including the 20 soldiers killed by the PLA in the Galwan valley,” said Pompeo, while issuing a joint statement after the dialogue at the iconic Hyderabad House.

He said the Chinese Communist Party was no friend of democracy, rule of law, transparency, freedom of navigation and a free and prosperous Indo-Pacific. “I am glad to say India and the US are taking all steps to strengthen cooperation against all threats and not just those posed by the CCP,” said Pompeo.

During the ongoing Sino-Indian military standoff, the US has stood firmly with India. The political and military leaderships of the two countries are in constant touch, sharing information on the movement of Chinese troops and weapons along the Line of Actual Control.

The US votes on November 3 to elect a new president, but military strategists believe that the results will not affect its growing defence ties with India. It is evident from the signing of BECA (Basic Exchange and Cooperation Agreement), the last of the four foundational military agreements, barely a week before the elections. Under the agreement, India gets access to advanced satellite imagery and topographical and aeronautical data in real time to guide its missiles and armed drones to their targets.

The Manmohan Singh government was opposed to the foundational agreements, and had cited national security concerns. But the Narendra Modi government signed the Logistics Exchange Memorandum of Agreement (LEMOA) for reciprocal logistical support in 2016, the Communications Compatibility and Security Arrangement (COMCASA) for greater access to niche military technology in 2018 and the Industrial Security Annex to the General Security of Military Information Agreement (GSOMIA) to allow private Indian companies to have partnerships with American firms in 2019. The GSOMIA was signed by the Atal Bihari Vajpayee government in 2002.

“The relationship will continue to deepen regardless of the outcome of the presidential elections because of the common interests with respect to China and Russia’s growing bonding with Pakistan,” said Benjamin Schwartz, senior director for defence and aerospace at the Washington-based US-India Business Council.

Although India is carefully balancing its growing defence ties with the US by continuing to purchase weapon systems from countries like Russia and France, the US now tops the list of its defence suppliers. From minor deals worth just $200 million in 2000 to a sprawling partnership worth $20 billion in 2020, the US has supplanted Russia as India’s predominant defence partner.

Strategic analysts believe that bilateral ties have reached the point of significant strategic convergence. It is evident from the strong pro-India position adopted by Washington during the Sino-Indian standoff and the decision to send the nuclear-powered supercarrier USS Ronald Reagan to the Indian Ocean through the Strait of Malacca.

Harsh V. Pant, who heads the strategic studies programme at the Delhi-based Observer Research Foundation, said that while Donald Trump or Joe Biden might have tactical issues to deal with initially, the strategic contours of the India-US relationship were quite well placed. “The challenge from China is so big and the realisation in America across the political spectrum is that China has to be managed robustly and profoundly. So, India-US relations will continue on the same trajectory,” said Pant. He said personalities tended to be peripheral when it came to India-US relations. For instance, Barack Obama came to the White House with a standard set of narratives about India on issues ranging from non-proliferation to Kashmir. But by the time he left office, Obama had turned into one of India’s greatest friends. “Similarly, Trump came to office after a campaign in which India and China were constant targets. And yet after four years, India has become America’s closest ally,” said Pant. 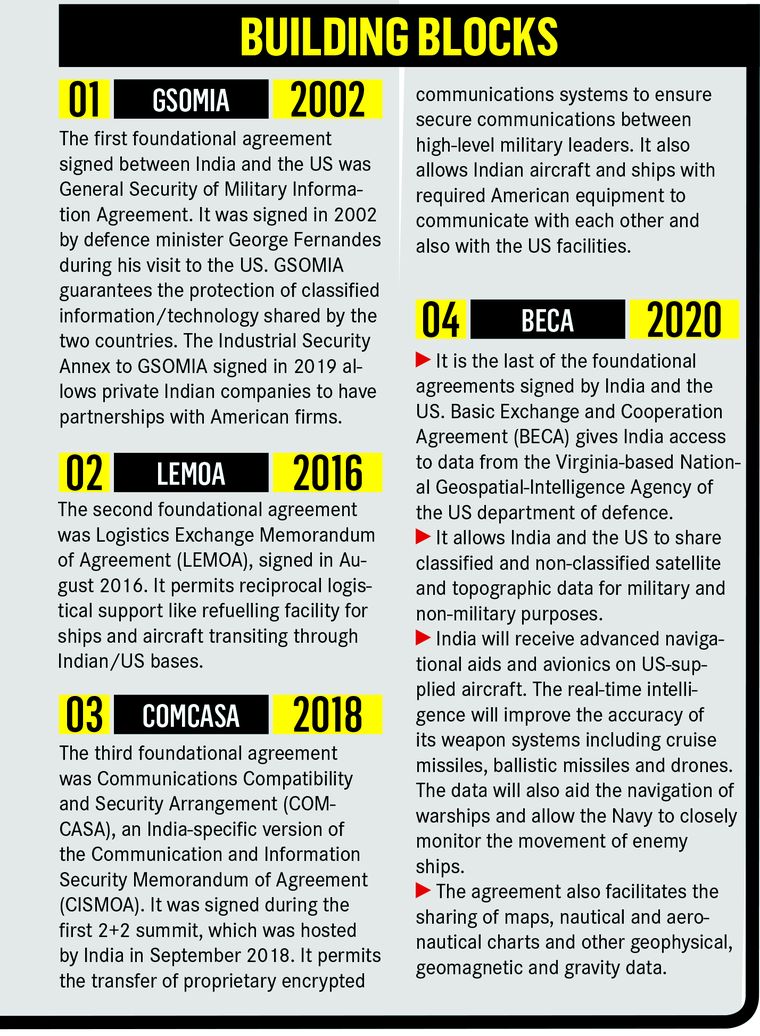 The Obama administration gave India the designation of Major Defence Partner and the Trump administration further expanded the trajectory of defence cooperation. It renamed the US military’s Pacific Command as Indo-Pacific Command in a symbolic nod to India’s growing importance. The partnership is not without its share of disagreements. The US lobbied hard against New Delhi’s decision to deepen cooperation with Russia by buying the S-400 Triumf missile system worth $5.4 billion and leasing more Akula class nuclear-powered attack submarines. India, however, ignored American objections and went ahead with both deals.

The disagreement did not affect the American decision to sell its Integrated Air Defence Weapon System for $1.9 billion. The system, which is capable of tracking and shooting down multiple aerial threats, is expected to expand India’s existing air defence architecture and neutralise threats posed by air attacks. The Trump administration has also approved the sale of MQ-9 Reaper drones to bolster India’s role as a net provider of security in the Indo-Pacific.

The Indian Navy, which operates 12 P-8I aircraft to protect the country’s vast coastline and territorial waters, plans to acquire 10 more such aircraft from the US to enhance anti-submarine warfare, anti-surface warfare, intelligence gathering, maritime patrolling, and surveillance and reconnaissance missions. The Navy is also looking at a $2.6 billion deal for 24 MH 60 Romeo helicopters to replenish its ageing anti-submarine and multirole choppers. The Army has taken delivery of six Apache helicopters and the Air Force 22 helicopters, which are being used extensively in the Ladakh sector.

India and the US have expanded the scope of bilateral and multilateral war games to improve cooperation and enhance interoperability. Both militaries participated in five major war games and executed more than 50 other military exchanges in the past year. The first ever tri-service exercise between the two countries named Tiger Triumph took place in the Bay of Bengal in November 2019. It saw the participation of 1,200 Indian troops and 500 US troops. Joint exercises like Malabar, Vajra Prahar and Yudh Abhyas demonstrate the growing operational cooperation between the two sides. And in what is seen as a response to the continuing Chinese aggression along the LAC, this year’s Malabar exercise will see the participation of Australia, along with regular partners India, Japan and the US.

Frank O’Donnell, non-resident fellow at the Washington-based Stimson Center, said the US-India strategic relationship is one of the very few issues left in Washington that enjoyed genuine bipartisan support. “I doubt that a Biden administration would be any different from the Trump administration in terms of US military sales to India. A new administration, with new energy to it, may make a new push for the F-21 offer to India,” he said, referring to Lockheed’s multirole aircraft. “But the new administration will face the same limitations regarding what the US is willing to offer to India. So there will be no F-35s or naval nuclear reactor technological cooperation.”