Army’s complaint against ammunition quality a ploy to promote privatisation? 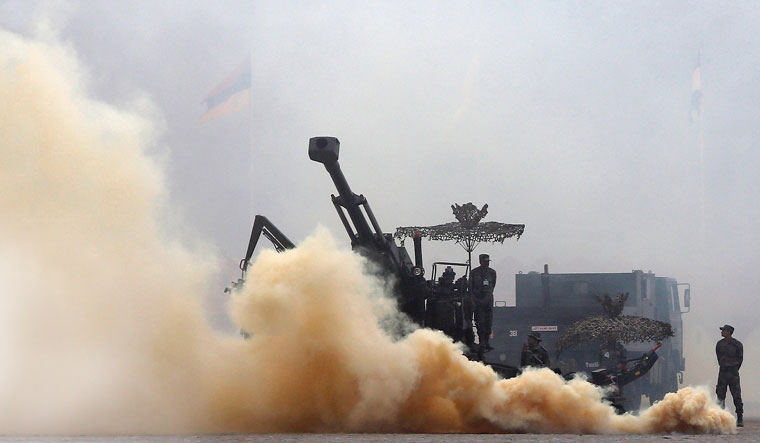 Power display: Soldiers participate in a mock drill during the Army Day parade in New Delhi. The Army, in a report, said that faulty ammunition supplied by ordnance factories had caused more than 400 accidents in the past six years | REUTERS

The Indian Army has deployed its T-90 and T-72 battle tanks in the Chumar-Demchok area in eastern Ladakh to deter any misadventure by Chinese troops. At 15,000 feet, it is possibly the world’s highest battlefield for tanks. But what perhaps worries the Indian soldiers more than the altitude and the threat from China could be the quality of their ammunition. According to a report prepared by the Army, faulty ammunition supplied by ordnance factories have caused more than 400 accidents in the past six years, resulting in 27 deaths and 159 injuries.

“On an average, one accident takes place every week,” said the report, which also revealed that the Army has suffered a loss of Rs960 crore since 2014 on account of faulty ammunition. It said the Army could have purchased around hundred 155mm artillery guns with the money it lost. Former Army chief General (retd) V.P. Malik flagged the issue as a serious one. “It directly affects the morale of the troops and their confidence in their weapon systems,” he said.

The ordnance factory board (OFB) refuted the allegations and said only 2 per cent of the accidents were caused by faulty ammunition. It blamed poor gun maintenance and faulty firing drills for the alarming numbers. The board also pointed out that between 2011 and 2018, more than 125 accidents were caused by ammunition procured from foreign and domestic sources other than the OFB. Responding to the Army’s view that it could have bought a hundred artillery guns with the money it lost, the OFB referred to the Army’s controversial purchase of ammunition from Russia during the Kargil war. By the same logic, it said, the “faulty Krasnopol ammunition imported from Russia during the Kargil war, amounting to Rs522.44 crore, could have financed another 55 artillery guns”.

The OFB’s history goes back to 1775 when the British government officially recognised the East India Company’s Board of Ordnance in Fort William, Calcutta. The first factory, called the Gun Carriage Agency (now Gun and Shell Factory), was opened in 1801 at Cossipore in north Calcutta. The OFB now has 41 factories, 13 development centres and nine institutes of learning, which are administered by the department of defence production under the ministry of defence. These are divided into five operating divisions based on the products they offer, ranging from ammunition and explosives, vehicles and weapons, material and components, and armoured vehicles and equipment.

Some defence ministry insiders expressed concern that a corporate lobby was trying to weaken the OFB. “Currently, hundreds of thousands of (rounds of) defective imported ammunition are available in various depots,” said an OFB official. Malik said even a single accident was unacceptable. “It is the question of a rifle failing when a soldier is about to fire at the enemy. When the barrel bursts, not only does expensive equipment get damaged, but precious lives of soldiers are also lost,” he said.

OFB officials said a decision was made in 2013 to test random samples whenever ammunition was handed over to the Army. They said the test had shown that up to 99.8 per cent of the samples did not have any problems and that most of the accidents happened because of training errors, expired ammunition and faulty, incompatible weapons. 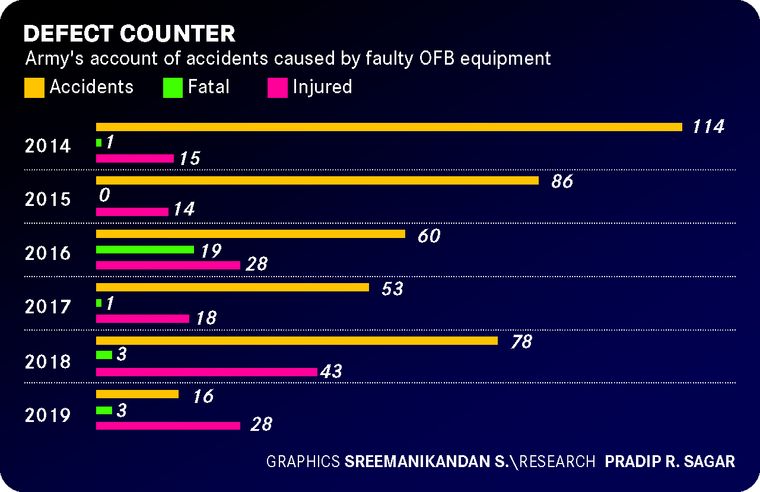 Hari Mohan, who retired in September as chairman of the OFB, told THE WEEK that there was a deliberate attempt to malign the ordnance factories. “First of all, the Army should have shared its report with the OFB.” He said ammunition supplied by the OFB was involved in only 19 per cent of the accidents, while the remaining cases were being ignored. Mohan also highlighted the fact that the OFB supplied ammunition at a much lower price compared with international market prices.

The Army, however, said the OFB overcharged its products, hurting the defence budget. It also accused the board of maintaining a monopoly over several essential products, resulting in minimal innovation and slow technological development as there was hardly any incentive to improve quality, cost-efficiency and accountability.

OFB sources said the Army had a mechanism to monitor the quality of the arms and ammunition it produced. The directorate general of quality assurance (DGQA), which is headed by a lieutenant general, certifies everything from ship to shoelaces made for soldiers. There are DGQA units in all ordnance factories, headed by a colonel-rank officer known as senior quality assurance inspector.

Lieutenant General (retd) V.A. Bhat, who had served as director general of quality assurance, said the OFB was not owning up to its responsibility. “The first party quality check by the ordnance factory is practically absent. From empty shell check to field check, the ordnance factory has to inspect everything. The DGQA has only a limited role.” He blamed the OFB for not implementing the Six Sigma methodology recommended by multiple experts committees, which emphasised the reduction of faults and accidents to 3.4 occurrences per million units or events.

OFB sources said the timing of the allegations against the board was suspicious as it coincided with the Narendra Modi government’s plans to corporatise the OFB. The Army said corporatisation would put the OFB at par with other defence public sector undertakings, which were managed by their own board of directors under broad guidelines from the government. The government hopes corporatisation will help the OFB improve its turnover from Rs12,000 crore to Rs30,000 crore by 2024-25.

Lieutenant General (retd) Sanjay Kulkarni, who was director general of infantry, said corporatisation was the only way forward because of the trust deficit between the OFB and the Army. As part of the corporatisation plan, the Union government will support the OFB in case of losses, with a loan for 30 per cent of the total shortfall and equity investment for the remaining 70 per cent. The government will also provide working capital for the first five years as a one-time corpus fund. 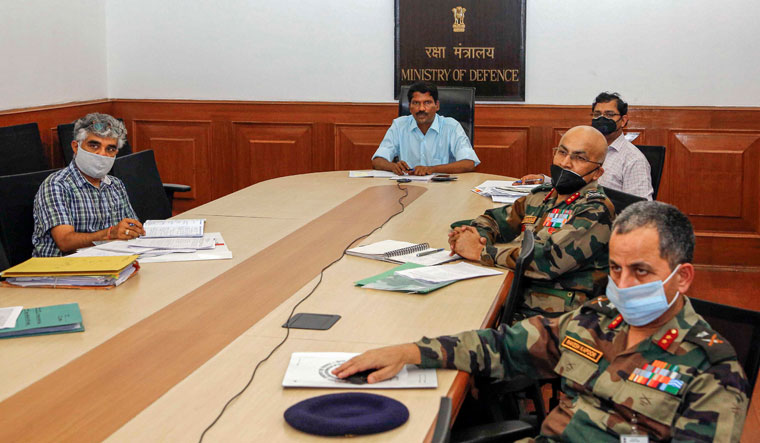 Talk time: Additional Secretary (department of defence production) V.L. Kantha Rao along with officials from the DDP, defence ministry and other senior civil and military officials during a videoconference with employees of the ordnance factory board in New Delhi | PTI

Subhash Chandra, who had served as secretary, defence production, said four committees had recommended the corporatisation of ordnance factories in the past. In August 2019, a cabinet note was prepared for the process. In September this year, the government constituted an empowered group of ministers (EGoM) under Defence Minister Rajnath Singh to oversee OFB’s corporatisation and also selected a consortium led by KPMG Advisory Services for assisting in the process.

Opening up the ammunition sector to private players, the Army has recently given at least five contracts to private firms. “We want a parallel capacity to come up, although it may not be on the scale of the OFB,” said Lieutenant General Santosh Kumar Upadhyay, master-general of the ordnance, in a recent media interaction. OFB employee unions are opposed to the move. M.K. Ravindran Pillai of the Employees Federation of the OFB said the government was looking to encourage private participation as part of the Make in India initiative. “Recent trends in defence procurement have shown a shift away from heavy reliance on ordnance factories and defence PSUs,” said Pillai. OFB workers have meanwhile deferred their indefinite strike against corporatisation, which was scheduled to begin on October 12, after the defence ministry offered to negotiate with them. A. Bharat Bhushan Babu, additional director general (media and communication) in the defence ministry, said the ministry would not alter service conditions of the employees till the conclusion of the talks. “However, it will not affect the government’s decision to corporatise the ordnance factory board,” he said.

Malik said the present controversy should not degenerate into a turf war between the Army and the OFB. “The defence ministry should have a composite committee to investigate the matter in a time-bound manner,” he said. “A detailed investigation will establish the exact cause of the accidents.”