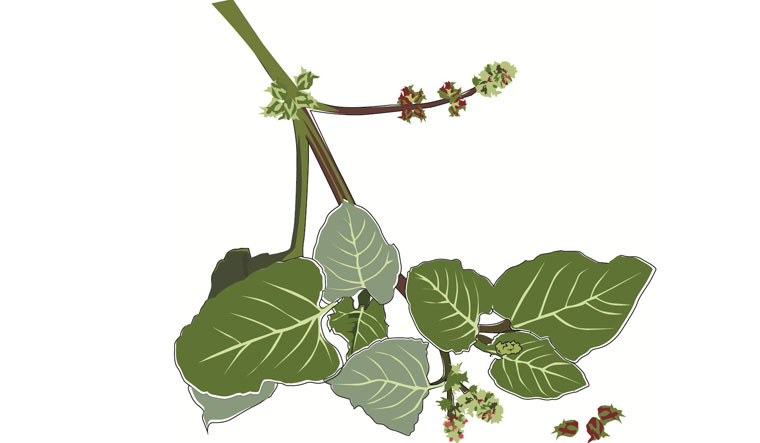 There is an emerging weed problem in north India. No, this one is not star-spangled like the one currently being exposed in Bollywood. The ramifications, however, could be much worse, as it could threaten India’s food security.

Two studies in the recent years have flagged the emergence and spread of a hitherto lesser known plant, Emex australis, across the wheat fields of Haryana and west Uttar Pradesh. Both studies warn that, if left ignored, this plant could take over the fields and reduce crop yield.

To the untrained eye, E. australis looks like a cousin of the spinach. In fact, in South Africa, where it is a native, its leaves are sometimes used as a vegetable. It is a sturdy plant which establishes itself in thick clusters and can deplete a field of nutrients meant for the crop. The weed has already spread across Australia, edging out both wheat and the sweet pasture grass. Known by various common names like cat’s head, bull head, devil’s thorn, spiny emex and goat head, this weed produces fruits called achene, which have three sharp spines, giving the plant yet another moniker, the three-cornered jack. In pasture lands, these spines can injure grazing cattle. Extremely resilient, the spines attach themselves to tractor tyres, shoes and even bare feet, and thus spread from field to field.ÅThey can even float on water, thus furthering the range.

Jyoti K. Sharma, head of Shiv Nadar University’s Center for Environmental Sciences and Engineering, said that they first noticed the plant during a field trip, when the students were documenting the flora of the area around the university campus in Greater Noida, way back in 2015. Later, they noticed some plants within the university campus, too, around the thematic botanic park that was being made. Soil for landscaping the park had been brought in from the neighbouring areas, and this is how the plant, too, must have come, they guessed. 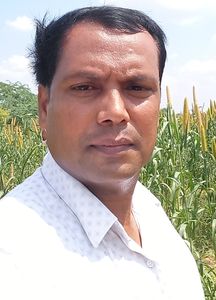 The university then surveyed Chithara village near the campus, where they found the plant to be growing extensively. Sharma, who is also the United Nations Food and Agriculture Organization’s international forestry consultant to several countries in south and southeast Asia, said that the plant was not present in the regions previously; it has somehow established itself in recent years.

It is not as if this plant is totally unknown in India. There is literature to show its identification in Bihar sometime in the 1980s. It has also been reported from Jammu and Kashmir since 1987. However, for reasons not yet explained, the plant did not spread itself across the country for decades, despite its innate ability to do so. How and when it reached the Gangetic plains and establishedÅitself are questions that require investigation.

In a paper published in 2018 in the Indian Journal of Plant Science—by Sharma, and his colleagues Amit Kumar Tripathi and Mohammad Ahmad—the researchers warn that the plant is adaptable to different climatic conditions, has the potential to become highly invasive, and could edge out native species. It reproduces aggressively—each plant is capable of producing over 1,100 seeds during a lifetime. These seeds are able to persist in the soil for several years.

Around the same time as the Shiv Nadar researchers were typing out their research, Virendra Kumar, a plant pathologist and assistant director at the directorate of plant protection, quarantine and storage, stumbled upon a clump of these pesky plants in a field at Chhainsa village near Faridabad. At that time, he was in the insecticide department, overseeing a field test on a new weedicide. “We were testing the weedicide when I noticed this plant, which I had not seen before,” said Kumar. “We sprayed the chemical on it, as well as on other known weeds. A week later, however, when we returned to see the results, the other weeds had perished—some had been chemically burnt, others had collapsed—but this clump was thriving.”

Kumar then sprayed the clump with various concentrations of weedicides and studied it for several weeks. The cluster continued to thrive. Following this, Kumar, along with a colleague, assistant plant protection officer E. Kumari, did a survey of 35 adjoining villages and discovered that the weed had comfortably gone native and established itself in varying degrees of density in 25 villages. “Surprisingly, they were even better established than many of the known weeds in the fields,” he said. “This initial study is only a warning bell; agencies like the Indian Council for Agricultural Research should now do more detailed research and look for ways of tackling the problem before it blows up in our face.” Kumar published his discovery in the Journal of Crop and Weed in 2019. The two studies may be small, but they already indicate the spread of the weed across states.

Invasive plants are those which come from other lands, their seeds usually riding piggy back on agriculture imports. Since these plants have no known control agents—for instance, bugs that feed on them—in their new homes, they spread rapidly, elbowing out native species. Kumar says wheat harvests can suffer in yield by as much as 62 per cent due to weeds. Almost all countries now have strict plant-quarantining rules, under which such imports are isolated and tested for presence of foreign pests, pathogens and weeds. In some agriculture-intensive countries like Australia, even shoes of passengers are checked to ensure there are no clinging burrs or achenes which could seed local populations of a foreign plant.

In fact, in 2004, when Greece hosted the Olympics and decided to evoke the spirit of ancient Athens, it had not reckoned with the bio-security regulations of the modern age. Many countries frowned upon the olive wreaths that were presented to medal winners, mandating fumigation and other pathogen killing processes before being allowed in. 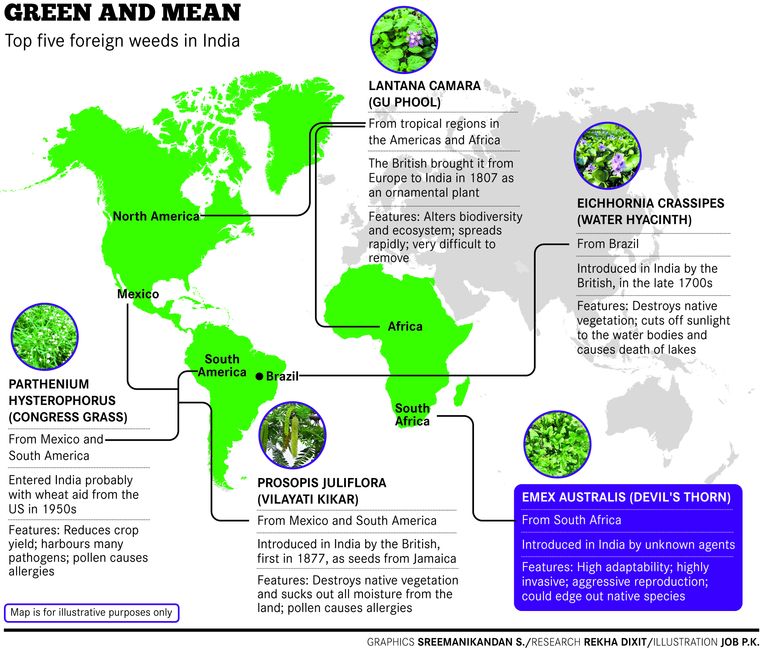 Yet, in a mobile world, it is not so difficult for exotic species to infiltrate new lands. One of the most pervasive weeds in recent times is Parthenium hysterophorus or “Congress grass”, which is believed to have entered the country in the 1950s along with the wheat the United States sent to then impoverished India. Like E. australis,ÅParthenium grows densely, choking out any other plant that might even try to grow in the area. Worse, it triggers respiratory allergies in many people.

Similarly, water hyacinth, a native of the Amazon, has strangulated water bodies across the country. It is said that the plant came to India because Lady Hastings was enchanted by its beautiful mauve flowers, and planted a few in her garden pond. Over 200 years later, the British Raj may have gone away but the plant has gone native with a vengeance. It is even a mariner’s nightmare as it gets caught in ship propellers.

The multi-coloured lantana, too, was introduced to India in the 1800s as an ornamental plant. It became a garden escapee in no time and has overrun even forests now, edging out native species. Cutting down the woody shrub is of little use, as the cut branches begin sprouting leaves and shoots even before they can be disposed of.

Prosopis juliflora or vilayati kikar is considered as one of the most hated trees in India. The Mexican import, again through the British, is a desert tree with little commercial use. Yet, it has edged out the kikar, babool and other acacias native to the land, each of which have a host of uses in medicine and other commercial products.

E. australis is used for traditional medicine in Africa. However, the uses of the weed are limited, and the damage it can do to the fields is far more serious. In the land of athithi devo bhava, just how well will this uninvited guest thrive? We will know more in the years to come.