While other space agencies have busy schedules, ISRO’s launches slip into 2021 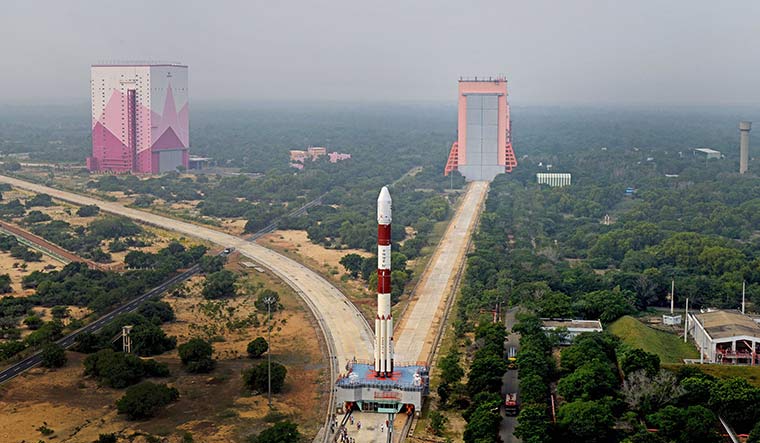 On the backfoot: File photo of Sriharikota. There has been no launch from here this year | PTI

MISSION GAGANYAAN will not take off this year. However, Indian Space Research Organisation (ISRO) is still hopeful that the last of the three flights in the mission, the one with Indian astronauts, should make it to the 2022 deadline, to coincide with the 75th anniversary of independence.

The first of the three flights of Gaganyaan was to have taken off this December, followed by another unmanned flight next year. The delay has been conveyed to the Space Commission.

Gaganyaan, India’s human space flight mission, is a three-flight programme, with only the third actually carrying the astronauts into a lower earth orbit. Given that India is not sending any animals to space before launching the astronauts, the first two flights are important for testing the organisation’s capabilities, including the life-support systems.

Instead of astronauts, the first two flights will have on board Vyommitra, a “half humanoid” (as she does not have legs) to help check the systems in the crew module in situ, including temperature, pressure levels and oxygen availability. She will have some level of autonomy to communicate with the ground station.

ISRO’s launch calendar has been heavily impacted by the pandemic, and there has been no launch from its spaceport, Sriharikota, this year. In fact, the only ISRO launch this year was G-SAT 30, but it was carried by a French rocket, Ariane, which took off from French Guiana on January 17. Although officials confirm that there may be around three to four launches before the year is over, they admit that the deadlines of several launches planned for the latter half of this year may slip into the next calendar year. This could have a cascading effect on the next year’s plans, too.

“We are hopeful that the final manned mission will take off as per the planned schedule, since we still have some time cushion for it,” said Vikas Singh, spokesperson, ISRO. At the time the project was announced in 2018, chairperson K. Sivan had said that it was possible to do the mission even earlier, given that the organisation had already done enough R&D on it, and developed prototypes. However, that confidence had not taken into consideration the Covid-19 pandemic, which brought work to a complete halt initially, and even now, it is not business as usual.

Apart from Gaganyaan, ISRO was scheduled to launch Aditya, its first probe to study the sun’s corona, too, this year. Chandrayaan-3 is listed for next year. This apart, there are several routine satellite launches, too.

S. Somnath, director, Vikram Sarabhai Space Centre, Thiruvananthapuram, said that two rockets were already at the space port in Sriharikota, waiting to take off since March, but with lockdowns and restricted movement, it has been impossible to do anything. One of these is the first Geo-imaging satellite (GISAT 1), which was to be launched upon a GSLV rocket. The other is a PSLV.

The GISAT is the first of the earth observation geostationary satellites. So far, India has only had polar satellites for earth observation. It is meant for continuous, real time observations, and has applications for weather forecasts, disaster management, as well as military uses. The launch, scheduled for March 5, was called off mysteriously a day before, with ISRO citing technical reasons, and not specifying anything else. The secrecy over the cancellation led to a number of conspiracy theories.

“The technical issues are resolved,” Singh said. “We are just waiting for travel to become easier.” Almost all of ISRO’s centres are involved in a launch, and it takes a minimum of a month’s work at the spaceport to “integrate” a rocket for take off—stacking the satellite, evaluating, testing and then when the countdown starts, fuelling. The components come from various places—rockets come from Thiruvananthapuram or Mahendragiri. The satellites are manufactured in Bengaluru, while the payloads may come from various other centres. “This requires the travel of officials to Sriharikota in various batches, across weeks, from different states. Sometimes, we also need international travel to our ground stations in Brunei and Indonesia,” explained Somnath. For weeks, the rocket manufacturing centre at Thiruvananthapuram itself was under triple and critical lockdowns.

While ISRO managed to shift a lot of its research to the work-from-home schedule, there are certain things that simply cannot be done from home. Launching a rocket is one of those. Interstate restrictions was one hurdle, the fact that many of the organisation’s own staff is affected by the infection, or in quarantine, creates further problems.

Somnath said that the rocket for Gaganyaan’s first flight is almost ready. However, other technologies are not in the same phase of readiness, yet, say sources. A lot of the hardware manufacturing contracted to the private sector, too, has been affected by the pandemic. In fact, even the four test pilots of the Air Force, who were sent to Russia, for astronaut training in January, had to twiddle their thumbs for weeks with Russia itself under lockdown. The training has, since, resumed.

Meanwhile, from other spaceports across the earth, some very interesting launches have happened. China has so far had 22 missions since January and reports say it is aiming for a record 40 launches by December. Its best year was 2018, with 39 launches, the highest in the world. China’s most prestigious mission, this year, was the July 22 launch of its Martian probe, Tianwen 1. This probe includes an orbiter, lander and rover.

The United Arab Emirates, too, sent a probe to Mars, the Hope Orbiter, from Japan in July. NASA launched its Mars 2020 mission, which included the Perseverance rover and the Ingenuity helicopter, the first to attempt rotor blade flying in an alien atmosphere. All three spacecrafts are expected to reach Mars next February. They took advantage of a short window that happens every 26 months, when the two planets are closest to each other.

Earlier in June, NASA and private player SpaceX did the first human space flight from the US since 2011, sending astronauts to the International Space Station (ISS). NASA has just announced that the next SpaceX flight to the ISS will take off in late October, taking seven astronauts to the 20-year-old orbital laboratory. In October itself, NASA plans to send a probe to the asteroid Bennu, to return to the earth with a sample.

The Russian space agency Roscosmos, too, launched a Proton rocket with two satellites from its Baikonur spacedrome in July and is planning, among other things, a flight to the ISS in September.

Experts say that unlike other countries, where facilities are in one place, India’s space centres are spread across several states, and the lockdown restrictions have made it impossible for such heavy interstate transport of components and humans. The European Space Agency (ESA) has not been able to do any launches, officials point out, since its spaceports are far away from the headquarters in Paris and their launches will require international travel, even more difficult in these times.

Singh added that a lot of work has resumed in various centres as the country has begun unlocking in phases, and unless there is no other unforeseen event, ISRO should manage three to four launches by the year end. However, he said it was not possible to say which these launches would be, since they are all being readied simultaneously. It would depend on which gets ready, and also on the scheduling.