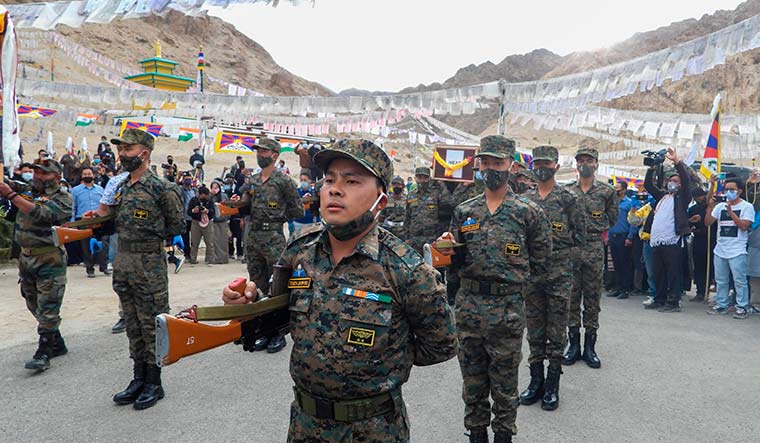 IT WAS A bittersweet moment for Jampa La, 83. He was moved to tears on hearing chants of ‘Bharat Mata ki Jai’ and ‘Jai Tibet’ as the mortal remains of Nyima Tenzin, wrapped in the Indian tricolour and the snow lion flag of Tibet, were brought to Leh on September 7.

Jampa is one of the first paratrooper commandos to be trained by the Indian Army as well as the Central Intelligence Agency of the United States. During the 1962 India-China war, the US helped India create a covert unit, comprising mostly Tibetan soldiers, called Special Frontier Force (SFF), also known as 22 (two-two) or Establishment 22. Jampa and 900 other Tibetan commandos were its first recruits who soon became masters of guerrilla warfare and mountain warfare. They were the first paratroopers in the Indian Army—one of the best in the world.

But Jampa could not achieve what Nyima, 51, has. Nyima lived as the son of two civilisations but died as the patriot of one. Nyima died reportedly in a landmine blast on August 30 on the south bank of Pangong Tso during an operation to thwart fresh attempts by the Chinese People’s Liberation Army (PLA) to transgress into Indian territory. Another SFF fighter, Tenzin Loden, 24, was injured; he is admitted in the Army hospital in Leh.

On the night of August 29, the SFF foiled the PLA’s ploy by occupying a dominant position near Thakung in southern Pangong Tso. It is with the help of the SFF that Indian troops have occupied heights close to the lake and Rechin La, giving them a dominant position over Chinese posts in that area for the first time since the fresh Indo-China conflict started in April.

“We are fighting a double war,” said Loden’s father, Yeshi Tenzin, who was an SFF commando for 22 years. “We are fighting not only to defend India’s border, but also to defeat China in Tibet. It is a golden opportunity for us.” 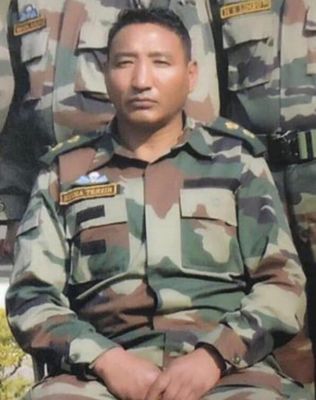 Nyima, 51, died in a landmine blast on August 30 during an operation to thwart attempts by the Chinese PLA to transgress into Indian territory.

China’s biggest weakness is its occupation of Tibet. If India recognises Tibet as an occupied country, it will dislodge the very basis of China’s territorial claims in the Himalayas. What makes Nyima’s sacrifice and Loden’s valour unique is that for the first time in 58 years, India has openly declared that Tibetans are on its side and are ready to fight China. “The PLA being confronted by a Tibetan soldier standing in India’s defence on the Himalayan heights is signal enough to Beijing that there is real danger ahead,” said a senior government official in New Delhi. The presence of BJP general secretary Ram Madhav at Nyima’s funeral in Leh was a clear signal from New Delhi that there will be a cost to Beijing’s every action. Nyima was not an Indian passport holder and proudly carried the Tibetan identity card, but he was given a guard of honour by the Indian Army in full public view. The civil society gathered to recognise his sacrifice and laid wreaths, singing Tibetan national songs and the Indian national anthem as well.

“Tibetan soldiers have been making sacrifices for 58 years but because of a more confident approach of the Modi government and internet facilities at its disposal, India has been able to recognise them this time,” said Yeshi.

Notwithstanding the Dalai Lama’s “middle way” approach, the Tibetan freedom struggle is being led by commandos like Yeshi, Loden and Jampa, whose motto is do or die. Living in a Tibetan settlement for war veterans, located along a highway in Dehradun, Jampa remembers an eventful past. “We lived in a big house in Kongpo, nearly 380km east of Lhasa,” he told THE WEEK. “My parents owned large tracts of farmland. But the Chinese soldiers looted everything. I lost my family.” His parents Tsering and Tsering Youdon, elder sisters Sithar and Shilok and younger brother Tsewang Tamding had all died in Chinese captivity. “But my younger sister Tsamchoe survived the massacre and so did my wife Palden and son Tseten. They are still in Tibet,” said Jampa, whose family name was Kongpo Chhankar.

One night in 1960, Jampa fled to India along with the husband of his elder sister. “We lived so close to the Indian border that it was a straight route,” he said. Jampa first came to Sikkim. “Unable to return to my country, I decided to join Establishment 22 when the Indian Army started recruiting Tibetans,” he said. “We were the first few recruits who were trained by Americans. I did not know Hindi at that time but I remember some of the Americans knew Hindi.” 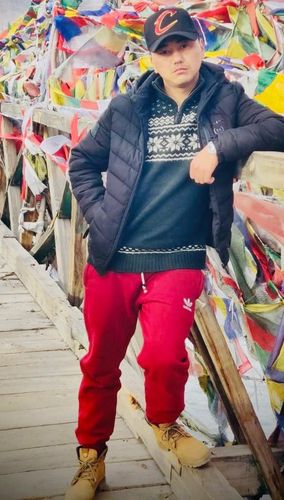 SFF fighter Tenzin Loden, 24, was injured in a landmine blast on August 30; he is admitted in the Army hospital in Leh.

With its base in Chakrata in Uttarakhand, the covert unit continues to be under the administrative control of the Directorate General of Security, which comes under the Research and Analysis Wing; its operational control lies with the Indian Army. The Tibetan commandos wear the maroon beret, trademark of India’s Special Forces, and are trained as parachute commandos. Their skills in guerrilla and high altitude warfare are unmatched.

“Our lung power is unmatched,” said Jampa. “In these altitudes, mountain climbing and fighting the enemy go hand in hand. Scaling heights comes easy to us.” Jampa, like Nyima, rose through the ranks to become a company commander. During the 1971 war, he scaled more than 16000ft to secure the Line of Actual Control. In 1984, the SFF played a crucial role in taking control of the Siachen glacier. During the 1999 Kargil war, the unit declared victory at Tiger Hill. The Tibetan soldiers, therefore, are stationed at Siachen and Ladakh, securing the LAC and protecting their “home in exile”.

Jampa remarried in India, but the wife, Tsering Bhuti, died in 2000. He has three children—his elder daughter is in Canada, son is a Thangka art teacher in Dharamsala and his younger daughter recently got married and lives in Shimla. “My children were born Indians but we still hold our Tibetan identity. Both are our strength,” he said.

Today, the SFF has around 10,000 soldiers. Of these, 6,000 are Tibetan refugees (around one lakh Tibetans live in exile in India); the rest are Gorkhas from Nepal. Since 2009, there has been some hike in salaries and pension benefits of SFF soldiers, but they are still not on par with those in the Indian Army.

The Central Tibetan Administration, which is running the Tibetan government in exile, located next to the Dalai Lama’s abode in Dharamsala, is aware of the sacrifices being made by Tibetan soldiers along the LAC. There is an unsaid understanding that peace and resistance can co-exist.

“Tibet is my fatherland and India is my motherland,” said Lhagyari Namgyal Dolkar, member of Tibetan parliament-in-exile. “But many Indians question whether China is attacking India because of the Dalai Lama and the Tibetans. We want to tell them that we are not a burden, instead we are your frontier force. China wants to control Ladakh just like it controlled Tibet.”

Dolkar’s uncle was also an SFF commando. “We will sacrifice our lives for India because it is our motherland, but we will also defeat China because we are fighting for Tibet,” said Dolkar. “We relate to the Indian freedom fighters because our emotions are still raw. We are not in history books yet, we are living a freedom struggle.”

As the newly created Union territory of Ladakh faces threat from across the LAC, it is these Tibetan soldiers who know how to tease the dragon. SFF veteran Sonam La, 57, said that Tibetans were well aware of China’s tactics and strategies. “The Chinese fooled Tibetans saying they were building roads in Lhasa and slowly captured Tibet,” he said. “So, we can tell their game when they build roads along the LAC.” Sonam was an instructor at the training centre in Chakrata, where the Indian Military Academy recruits undergo training in mountain warfare and rock climbing.

Sonam’s parents had entered India through Tawang. His father joined the SFF and fought in the 1971 war. “My father got shot in the leg. He retired in 1974 on medical grounds,” said Sonam. “That is when I decided I will complete the mission my father had set out on. And that was to free Tibet.” After convincing his mother, he joined the covert unit in 1982.

The SFF’s appeal for equal pay and benefits is in court now. But there is hardly any hue and cry over it. “We are neither fighting for economic gains, nor fearful of any discomfort,” said Sonam. “Some, like my father, earned Rs400 as salary with no pension benefits, others like me get a pension of Rs28,000 per month.”

But Tibetan poet and activist Tenzin Tsundue said that to truly celebrate Nyima’s sacrifice, India must officially recognise the SFF for its 58 years of service as India’s Himalayan war horse, and immediately give equal pay scale and rank promotions for SFF soldiers. He also said that India must officially come out in support of Tibet. “This will not only help secure Ladakh but also help Nepal, Bhutan, Bangladesh, Pakistan and Myanmar protect their territorial integrity from Chinese aggression,” he said. “India must take the lead.”