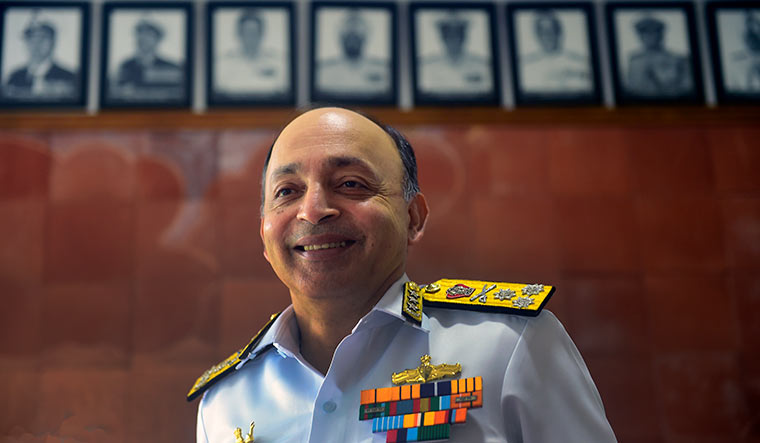 VICE ADMIRAL ANIL KUMAR CHAWLA took over the reins of the Southern Naval Command in July 2018, two months after the US military renamed the Pacific Command—its largest and oldest unified combat command—as the Indo-Pacific Command.

Diplomatically, the name change was largely symbolic, done “in recognition of the increasing connectivity between the Indian and Pacific Oceans” and India’s growing importance in “maintaining regional stability”, as US defence secretary Jim Mattis put it. But it has raw implications in maritime matters. China has been widening its footprint in the Indian Ocean region, increasing India’s geopolitical relevance for the US.

For the Indian Navy, challenges are now manifold. As the SNC’s commanding-in-chief, Chawla is also in charge of training all Navy personnel to meet these challenges. In an exclusive interview with THE WEEK, he spoke about the Navy’s plans for sustaining its maritime edge, its growing role as a regional stabiliser, its response to Covid-19, and why “hot wars” have given way to cold, tactical manoeuvres.

Q/You recently inaugurated a training lab for the Naval Communication Network—a secure, captive grid that will give the Navy digital supremacy over its rivals. What are the processes involved in building NCN and how will it achieve its objectives?

A/ NCN was sanctioned by the (Union) government many years ago. In exchange for the spectrum held by the armed forces, we were given a set of landlines, so that the (spectrum) would be of better use to the civilian population.

So, a [land-based, military] communication backbone is being laid out countrywide. The Army and the Air Force, too, have networks of their own. This backbone will enable us expand our operations and improve processes. NCN is a terrestrial network; it would be connected to ships through satellites. It is an advanced communication solution, with a higher level of classification (security).

The Navy’s Signal School in Kochi trains all our communicators. The school will also train personnel for NCN.

Q/ Covid-19 has significantly impacted seafarers, because of the compact environment and ventilation systems in ships. How has the Navy addressed these challenges?

This is a particular challenge for ships and aircraft. The closed-loop system of air conditioning is required because of the electronic systems and (to ensure) comfort of the personnel. So, we have evolved safety protocols.

People are quarantined for 14 to 21 days and then tested before they go on board. They have to stay on board until their duty ends; no contact with outside parties at all. Similarly, any item that comes from ships is disinfected. We have set up a few mechanisms for that.

A/ Yes, there are a number of innovations, like foot-operated doors for bathrooms on ships. Ultraviolet cabinets for sanitising small items; bags are irradiated and sprayed with sanitiser in tunnels with conveyor belts.

Another interesting innovation is the aerial evacuation pod. Patients can be evacuated from remote areas like islands in these sealed pods. We have supplied these pods to the Army and the Air Force, the Nagaland government and ONGC, and also to countries like Iran, Maldives, Mauritius, Seychelles and Sri Lanka. But we do hope these pods will never have to be used (smiles).

Q/ The Indian Ocean region is increasingly becoming a geostrategic focal point. For example, the US renamed its Pacific Command.

A/ The US has realised that the economic growth in Asia—10 of the top-20 economies today in the world are in Asia—[depends] on trade, energy and security, and on the traffic between the Indian Ocean and Pacific Ocean regions.

The Indian Navy believes that the Indian Ocean region is a place where we need to be a major force—for good. India is a democratic country; we never had expansionist designs. We have excellent relations with everybody, except for a couple of countries. We have fundamentally strong relations with the entire Africa, southeast Asia, countries in the Persian Gulf, the island countries in the Indian Ocean region, Australia and, of course, with the US, Russia and the European Union. All these countries have accepted that the Indian Navy is a stabilising force, not an aggressive force.

The Navy will continue to keep the Indian Ocean region open and free for navigation for all countries, and ensure that the rule of law is maintained.

Q/ Have the maritime challenges in the region increased in recent times?

Yes, challenges today are manifold. New powers are emerging, new economic interests are shaping up. There is a challenge [because of the rivalry] between the entrenched powers and the new powers. Challenges like global warming and Covid-19 can cause huge dislocation of populations and massive economic disruptions.

Resources are drying up on land, so there is a lot of pressure on the seas. It will become a security issue at some stage. Take fishing, for instance. Some years ago, there was a ban on fishing in the North Sea, imposed by the UK; there is a ban now imposed in the South China Sea by China.

Q/ You mentioned World War II. Is the situation becoming as conflict-ridden as it was before the war?

A/ It is not a world of hot wars now. Weapons have become too destructive to be used indiscriminately. So, it is now more a war of deterrence; a war of minds; of information campaigns; of economics. The ambit is much larger.

Policymakers (must look at) major factors that are shaping the security environment, and then see the threats we face, and plan how to respond to them. The simple answer for everything is that we need to be strong and self-reliant.

Q/ The Navy has long been trying to become self-reliant. Seventy-five per cent of the components on the indigenous aircraft carrier were made in India. But if you look at the other Indian Ocean and Pacific Ocean powers, India’s naval expenditure is quite low—15 per cent of its total defence budget. The US spends 30 per cent; Australia and Japan spend around 25 per cent each. Are budgetary constraints affecting the Navy’s ambitions?

A/ The government can give only as much money as it has. We can always say that more money will help. But we are also aware of the government’s constraints. As professionals, our job is to try and meet our requirements with the money we have.

As the saying goes, when you are poor you think [about how to spend the money well]. The Navy is not poor, but we do have to think about cost-effective (choices).