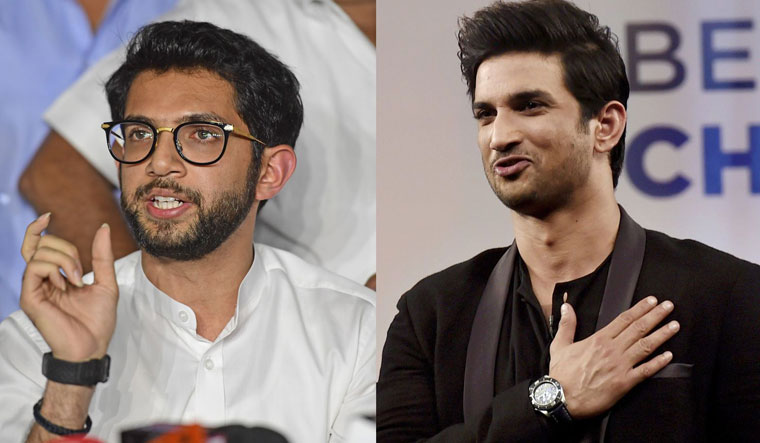 Cub, cornered: It was said that Aaditya Thackeray had attended a party with Sushant Singh Rajput (right) just a few days before his death | Amey Mansabdar

The mystery surrounding the alleged suicide of actor Sushant Singh Rajput is getting deeper by the day. Three investigating agencies—the Mumbai Police, the Bihar Police and the Enforcement Directorate—are examining whether there was any foul play, while the Central Bureau of Investigation is all set to take over the probe.

Sushant was found dead at his Bandra residence on June 14. It was reported as a suicide as he was found hanging in his room. The initial controversy surrounding the death was about nepotism and bitter rivalries within the Hindi film industry. There were reports about how certain influential names exerted control over the careers of newcomers, especially those without any industry background. The Mumbai Police recorded statements of filmmakers like Aditya Chopra of Yash Raj Films, director Mahesh Bhat and Apoorva Mehta, who is the CEO of Karan Johar’s Dharma Productions.

Sushant’s girlfriend Rhea Chakraborty subsequently approached Union Home Minister Amit Shah for a CBI probe into the actor’s death. The tragedy turned into a political controversy after Sushant’s father, K.K. Singh, expressed his unhappiness over the investigation carried out by the Mumbai Police and registered a zero first information report (an FIR that can be filed at any police station irrespective of the place of crime and area of jurisdiction) in Patna on July 25, accusing Rhea and her family of mentally and financially harassing Sushant and driving him to suicide.

With Bihar heading for assembly elections, Chief Minister Nitish Kumar and Deputy Chief Minister Sushil Modi accused the Uddhav Thackeray-led Maha Vikas Aghadi government in Maharashtra of not investigating the case thoroughly. “Uddhav Thackeray is under pressure from the Congress-funded Bollywood mafia and is bent on saving all the elements responsible in the case,” tweeted Sushil Modi.

On July 30, Atul Bhatkhalkar, BJP legislator from Kandivali East constituency, wrote to Shah, requesting a CBI inquiry into Sushant’s death. “An Nationalist Congress Party leader like Parth Ajit Pawar has demanded a CBI inquiry,” said Bhatkhalkar. “Parth’s father is Deputy Chief Minister Ajit Pawar. The home minister belongs to the NCPì. Sushant’s sister has complained that the deputy commissioner of police carrying out the inquiry did not record her statement. Considering all these aspects, people also say that a young minister in the Maharashtra government has a vested interest in the case. The Bihar government has launched its own investigation. It would be difficult to reach a conclusion if police forces of two states are investigating the same case. Hence I would like to request you to hand over the investigation of the case to the CBI.”

Bhatkhalkar’s letter stirred up a hornet’s nest, with the needle of suspicion pointing towards Uddhav’s son Aaditya. It was said that Aaditya had attended a party with Sushant just a few days before his death. Sushant’s former manager Disha Salian, who committed suicide a few days before Sushant’s death, had also attended the party.

On August 4, former Maharashtra chief minister Narayan Rane who is now a BJP MP, said Sushant was murdered, while Salian had been raped and murdered. Aaditya felt compelled to issue a statement defending himself. “As grandson of the late Balasaheb Thackeray, I assure you that I will never do anything that will bring shame to my Thackeray name, the Shiv Sena and the state of Maharashtra. Bollywood is a big industry which provides employment to thousands of people and there is nothing criminal in having good relations with the many who are associated with the industry. This mudslinging at me and the Thackeray family is the result of frustration and political despair because our government is working well and is very popular,” said Aaditya.

Sena leaders including Transport Minister Anil Parab, MPs Sanjay Raut and Priyanka Chaturvedi rushed to Aaditya’s defence. In his weekly column in the Sena mouthpiece Saamna, Raut wrote that Sushant’s relationship with his father was not cordial as the actor was not happy that his father had remarried. Raut challenged the BJP to openly name Aaditya in the case.

A Sena insider told THE WEEK that Aaditya was just 30 and was yet to fully grasp how his authority and power could be exploited by certain elements in the film industry for their ulterior motives. “Balasaheb Thackeray also had friends in Bollywood, but nobody would dare use his name for ulterior motives. Uddhav knows everyone, but prefers to maintain a safe distance from these people,” he said. “Now that Aaditya is in politics full time, he should maintain a safe distance from friends and acquaintances who could misuse his name.”

He said the BJP was using the case for electoral gains in Bihar and to destabilise the Maharashtra government. “By attacking Aaditya, they want to bring us to the negotiating table so that a Sena-BJP government can be formed again. The BJP is putting out feelers about breaking our ties with the Congress and the NCP. It will accept the post of deputy chief minister now and will take the chief minister’s post two and a half years later,” said the Sena insider.

The Union government has, meanwhile, handed over the case to the CBI following a recommendation by the Bihar government. Nitish made the recommendation as he felt that the Mumbai Police was not cooperating with his officers. For instance, Vinay Tiwari, superintendent of police, Patna City (Central), who was sent to Mumbai to monitor the investigation, was quarantined by the Brihanmumbai Municipal Corporation, citing Covid-19 protocol.

Rhea has now filed a petition in the Supreme Court seeking the transfer of the case from Patna to Mumbai. Aaditya’s role in the case came up during the arguments in the apex court on August 11 when senior advocate Maninder Singh, who was appearing for Bihar, said, “It is the Maharashtra CM’s son who is involved in the case, [and it has] nothing to do with Nitish Kumar’s insistence on filing the FIR.” Abhishek Manu Singhvi, representing Maharashtra, said the desperation of the Bihar government to take over the investigation was fuelled by the upcoming assembly elections. “I don’t know whether Sushant’s death was murder or suicide, but I can say that the murder of the Criminal Penal Code is being attempted here,” said Singhvi. “After the election, you will not hear of this case.”