China enjoys the upper hand in negotiations for border disengagement 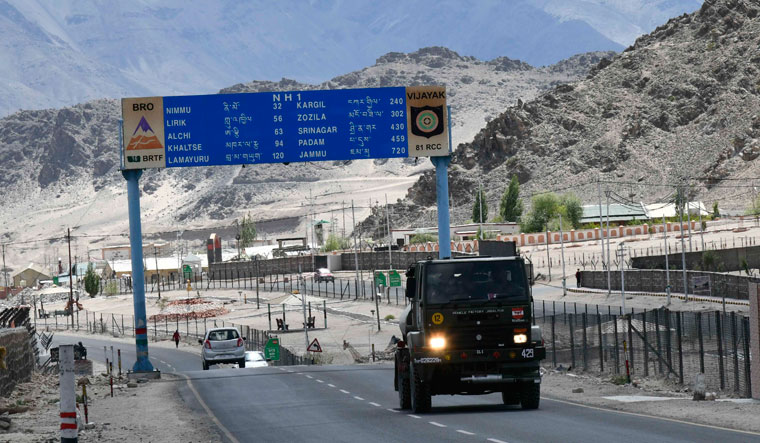 Trooping in: An Army truck passes through Leh | Sanjay Ahlawat

Tuesday, July 14, brought with it a cloudy morning. Lieutenant General Harinder Singh, commanding officer of the Leh-based XIV Corps of the Army, boarded a military chopper to Chushul for disengagement talks with China. The meeting with Major General Liu Lin of the People’s Liberation Army was the fourth in a series of negotiations between the two armies. Though the first meeting on June 6 resulted in a consensus for disengagement, it was breached with the Galwan valley clash on June 15.

The ongoing phase of negotiations is likely to have a significant and long-term impact on maintaining peace on the Sino-Indian border. Troops from both sides have reportedly begun stepping back from friction points in the Galwan valley, Hot Springs and Gogra by creating buffer zones. Military sources said the discussions were focused on reducing the number of troops, artillery and armour units. Both commanders also spoke about the tricky finger areas of Pangong lake and Patrolling Points 10 to 13 in the Depsang sector.

The PLA has deployed nearly 30,000 troops on multiple locations in eastern Ladakh by setting up permanent bunkers, pillboxes and observation posts. With the disengagement process progressing slowly, both sides are preparing for the upcoming winter deployment. The XIV Corps has already cancelled all leave till November and nearly a lakh soldiers have been deployed on the Ladakh border. In Galwan, Gogra and Hot Springs, troops are being pulled back only for about three kilometres, while the artillery and armoured units are staying put.

Both sides have agreed to create a buffer zone of nearly three kilometres at all friction points till the de-escalation process is over. A military officer based in Leh said the buffer zone was created only to prevent another Galwan type incident. “It is only for the next few weeks, till the complete pullback from in-depth areas. It will be out of bounds for both sides and no foot patrol is allowed.”

Sources said the Indian side showed urgency to disengage after the death of 20 of its men in the Galwan valley. According to an officer privy to the ongoing developments, the negotiations for disengagement, at least to an extent, have gone in China’s favour. For instance, on Patrolling Point 15 in Hot Springs and Patrolling Point 17 A in Gogra, China has intruded into the Indian perception of the Line of Actual Control by about three to four kilometres. “But major loss is in the Galwan valley, where the LAC has been shifted towards our side,” said the officer. He cautioned that the buffer zone should not become the new normal as it would undermine India’s presence and control in the area.

A military observer said the PLA followed the strategy of advancing 10km and retreating six kilometres. In places like Galwan, Gogra and Hot Springs, buffer zones are currently well within Indian territory. The Galwan valley, which was never contested and where India has been patrolling for decades, saw Chinese soldiers intruding more than three kilometres into the Indian side of the LAC. Now both countries have agreed to withdraw one and a half kilometres even as China claims the entire valley and the surrounding heights. Similarly, 1,500 PLA soldiers intruded nearly three kilometres inside Indian territory at Patrolling Point 17.

There is no reduction in the number of troops that the PLA has concentrated on its side of the LAC. “China has moved nearly 40,000 troops and weapons from 2,000km away to position them close to the LAC,” said the observer. “So the PLA cutting back one and a half kilometres for the buffer zone has very little meaning. Intentions can change quickly as the capability is there.”

China wants to go back to the 1959 version of the LAC, suggested by former premier Zhou Enlai. It will force India to withdraw up to 20km from the existing LAC.

The Indian Army has made it clear that it is monitoring the pullback by the Chinese with utmost caution. It plans to maintain additional troops on the border even during winter, like it did after the Kargil war. It has approached local monasteries for the use of their premises for housing additional troops during acclimatisation before deployment, while the Navy is being roped in to upgrade patrolling infrastructure in Pangong lake. “I am told that the Navy is sending a dozen high-powered, bigger capacity, top-of-the-line steel boats to match the heavier Chinese vessels,” said Tsering Gyalpo, former senior superintendent of police.

The government has sanctioned Rs589 crore to enhance border infrastructure in the Ladakh sector as against Rs72 crore allocated last year. Authorities in Ladakh are reviving a 2014 proposal for allocating Rs650 crore for the development of border areas, aimed at supporting the nomadic tribes and preventing their migration from the region. The presence of locals in the border region is crucial in keeping the enemy out. For instance, it was a local resident who first flagged the latest round of Chinese incursion in Ladakh. On April 27, Urgain Chondon, chairperson of the Nyoma block development council, had uploaded photos and videos of PLA vehicles moving along the Chinese-occupied Tashi Gang area near Demchok. Hence, a multi-pronged military strategy, which also takes locals into confidence, could be the best way to maintain peace and security on the border.