The treatment landscape of Covid-19 has turned chaotic, and misleading claims generating false hopes are often finding favour. Every few days, a new drug seems to show “promise”, leading to patients rushing to procure them, and at times, doctors prescribing them, despite lack of solid evidence.

Amid the chaos, though, several doctors concur that dexamethasone, a corticosteroid, has proven to be the best bet until now. The drug was tested in over 70 hospitals in the UK as part of the steroidal arm of RECOVERY trial, a randomised controlled trial (RCT) that began in March . The results of this arm of the trial, announced on June 16, revealed that dexamethasone reduced deaths by one-third in ventilated patients, and by one-fifth in patients receiving oxygen therapy only.

However, doctors told THE WEEK that they had been using the drug since the early days of the pandemic. “It is an old steroidal drug,” said Dr Sumit Ray, head, critical care medicine, Holy Family Hospital, New Delhi. “Steroids have been known to be fairly useful in ARDS (acute respiratory distress syndrome), hence we had been using it from the beginning. We also had the benefit of learning from the experience of intensivists in European countries that faced a surge before we did.”

In its latest protocol for clinical management of Covid-19, the Union health ministry included dexamethasone for the treatment of moderate to severe cases of Covid-19. It is being recommended as an alternative to the other corticosteroid medication, methylprednisolone.

However, timing is key, explains Ray. Covid-19 has two main phases. In the early phase or viremia, the virus attacks the body and an immune response is triggered. It is when the immune system goes into an overdrive, known as a cytokine storm, that the trouble starts. Steroids work by suppressing the immune system. “Suppressing the immune system can sometimes lead to secondary bacterial infections,” said Ray. “But we know by now that in Covid-19, that does not happen very often. So, steroids work well in case of critically ill patients.” 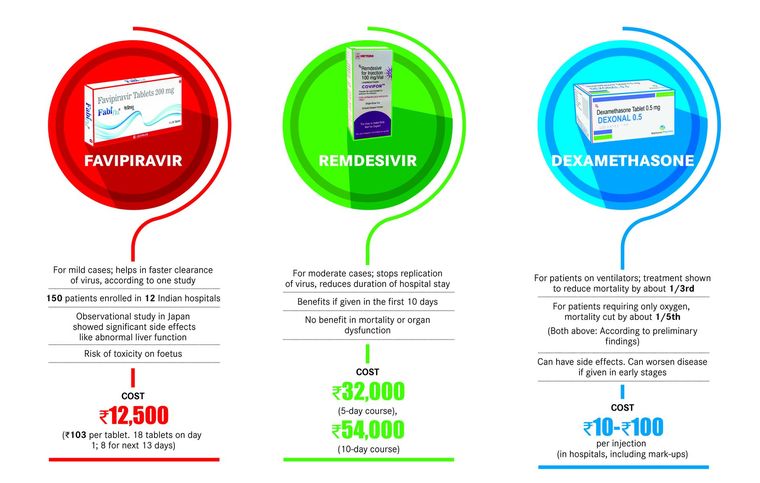 Dr Tanu Singhal, consultant, paediatrics and infectious diseases, Kokilaben Dhirubhai Ambani Hospital, Mumbai, said that the drug was being used since the early days but it is not a magic bullet. “Not all patients will benefit from it, and there may be some side effects, too,” she said.

The other drug that is gaining popularity, remdesivir, is an anti-viral that seems to work by stopping the replication of the virus in the early stages. Preliminary results of an RCT done in the US showed that the drug helped in reducing the duration of hospitalisation. But Dr Shruti Tandan, consultant, critical care medicine, Jaslok Hospital and Research Centre, Mumbai, is not impressed. Remdesivir, she says, was an “orphan drug” of sorts, waiting for a clinical indication for over a decade. And it seems the company (Gilead Sciences) has finally found one. Tandan says that Covid-19 progresses in stages, with the active phase beginning from 5 to 10 days, and after 7 to 8 days, the body begins to develop antibodies to combat the virus.

When the body enters the cytokine storm phase, the patient turns serious. At this point, the virus has already been cleared from the system. “The value of remdesivir is in the early phase, if given in the first 10 days,” said Tandan. “But it is no magic cure because it does not reduce mortality or organ dysfunction. And that’s what matters in an ICU.”

While hydroxychloroquine (HCQ), also an experimental drug in Covid-19, was cheaper, easily available and had proven safety, remdesivir is expensive, difficult to procure, and has side effects such as kidney and liver toxicity that might increase the burden on ICUs. “The panic has meant that people are stockpiling pulse oximeters, oxygen cylinders and even expensive drugs, and those who need it may face shortages,” she added. Though remdesivir has shown to have same benefit in RCTs, its cost-effectiveness is an issue, said Singhal.

However, it is the third drug in the fray, favipiravir, also an anti-viral, that seems to be bothering doctors the most. “In the case of favipiravir, the problem is that the drug has become so popular that even people from the villages seem to know about it, and want it,” says Dr S.P. Kalantri, department of medicine, MGIMS, Sevagram, Maharashtra. “But there is no high-quality evidence to suggest that it is either safe or effective.” Small, poorly designed trials have shown that the drug helps in faster clearance of the virus, and improvements in X-ray have been shown in an observational study. “But these are not meaningful clinical endpoints, these are only surrogate markers,” said Kalantri. “Who cares if the virus clears on day 5 or day 7? Or if the X-ray shows improvement on day 2 or day 3? In a disease such as this, it is the mortality benefit or progression to sever disease that matters.” In India, a trial done on favipiravir in 12 large hospitals have managed to enrol only 150 patients, and was sponsored by the company. Singhal says that the company ought to make the results of the trial public so that experts can evaluate them.

“At Rs 103 a tablet, it is not exactly cheap,” said Kalantri. “Besides, the question is whether we need a medicine for mild disease at all. When such medicines are approved by the drug regulator, then family members of a patient feel pressured to buy them since the well-being of a loved one is at stake. The question is, is that kind of money worth it for a flu-like illness? In Japan, the trial showed it had significant side effects and put a foetus at risk of developing toxicity . How many doctors are aware of this?”

These are desperate times. But logical thinking and scientific rigour must not be abandoned, experts insist. If we can manage a good trial with a clear endpoint and solid evidence as in the case of dexamethasone, other drugs need to be evaluated in a similar manner.