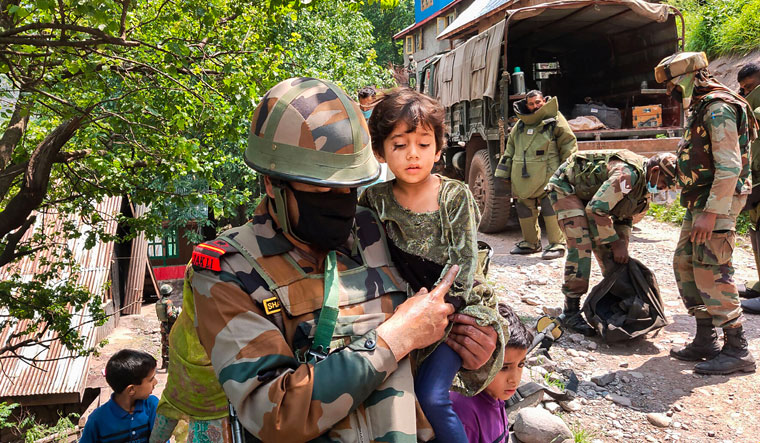 In safe hands: Indian forces evacuating residents of Dardpora in Uri, Jammu and Kashmir, on June 8, after an unexploded shell was found there | PTI

When Article 370 was revoked last August, a strict lockdown and communication blackout was imposed all over Jammu and Kashmir to prevent any backlash against the move. Operations against militants were also suspended. In contrast, after lockdown was imposed early this year to tackle the Covid-19 pandemic, 59 militants were gunned down by security forces. Those killed include senior commanders of the Hizbul Mujahideen like Riyaz Naikoo and Junaid Sherri, Lashkar-e-Taiba commander Haider, Jaish-e-Muhammad commander Qari Yasir and Burhan Koka, commander of Ansar Ghazwat-ul-Hind (AGH), an Al Qaeda affiliate in Kashmir.

Such has been the pace of anti-militancy operations during the lockdown that 23 militants were killed in the first 24 days of April. Meanwhile, 15 civilians and 20 security personnel lost their lives in encounters, targeted killings by militants and shelling by Pakistan this year till June 15. Since February, a new militant group called The Resistance Front (TRF) has been quite active in Kashmir. Security forces say TRF is LeT in disguise and has been formed to mislead the Financial Action Task Force (FATF), which has threatened to blacklist Pakistan for supporting terrorism. According to Kashmir inspector-general of police Vijay Kumar, TRF has members from the LeT and the Hizbul Mujahideen. He said the hunt for Naikoo, who was Hizb’s chief operations commander, was intensified after security forces suffered setbacks in north Kashmir.

Naikoo and aide Adil were killed on May 6 at Beighpora in Pulwama, within hours of another encounter at Handwara in which a colonel, a major, two soldiers and a police sub-inspector were killed. Kumar said the police were on Naikoo’s trail for six months and managed to bust six of his hideouts before tracking him down to Beighpora. “We interrogated some of his over ground workers (OGWs) and got important information about him,” he said.

Security experts believe that Naikoo, a former mathematics teacher, was more of a strategist than a hardcore militant. He led the Hizb well after Musa, who replaced Burhan Wani, then parted ways with the group and joined AGH. He wooed recruits and used social media to good effect. Kumar said Naikoo’s killing was a big jolt to militancy in Kashmir.

Once the lockdown began, the police stopped handing over the bodies of local militants for burial. Such burials attract huge crowds and motivate young men to take up militancy. Like foreign militants, local militants, too, are now buried at places like Sonamarg and Baramulla, where only family members are allowed. According to police sources, the order not to hand over the bodies came from the Union home ministry. The matter had first come up for discussion in 2018, but no decision was taken because of opposition from the state government.

The Centre also slipped in the new domicile law just five days into the lockdown, granting domicile status to anybody who has served in Jammu and Kashmir for ten years or lived there for 15 years. It also confers domicile status to those who have studied in Jammu and Kashmir for seven years and passed their class X/XII examinations from any institution in the Union territory. Political parties in Kashmir have questioned the timing of the new law and have accused the BJP of using it to engineer a demographic change.

While security forces have been relentlessly pursuing militants in Kashmir, Chinese incursion in Ladakh has led to increased attempts of infiltration along the LoC and the international border. Pakistan has also increased shelling on the LoC. On June 1, the Army foiled a major infiltration bid in the Naushera sector in Rajouri, killing three militants and seizing weapons and a large quantity of ammunition. Two days later, Pakistan violated ceasefire in the Sunderbani sector, killing a soldier and injuring two others.

Increased attacks by Pakistan have come in the wake of Pakistan Foreign Minister Shah Mehmood Quraishi’s statement that “China cannot ignore India’s illegal construction in Ladakh”. He said if India attacked Pakistan again, the world should not expect restraint from Pakistan like it showed in February 2019. Security experts in Kashmir see a nexus between Chinese incursion and Pakistan’s aggression on the LoC. They believe that Pakistan is trying to exploit the situation at a time when India is trying to avoid a confrontation with China. What lends credence to the China-Pakistan military nexus against India is a tweet by Chinese diplomat Wang Xianfeng saying the standoff between India and China in Ladakh was linked to New Delhi’s decision to scrap Jammu and Kashmir’s special status last year.

Wang’s statement has come as a shot in the arm for separatists and their supporters in Kashmir. The visit of Pakistan army chief Qamar Bajwa to Gilgit-Baltistan on Eid is yet another indication of China and Pakistan ganging up against India. The Pakistanis are delighted about the Chinese move in Ladakh, which has come at a time when New Delhi had openly pledged to reclaim Pakistan-occupied Kashmir and Gilgit-Baltistan and started issuing weather updates for the region. Given the Chinese intransigence in Ladakh, the possibility of infiltration of militants into Kashmir and further heating up of the LoC cannot be ruled out.