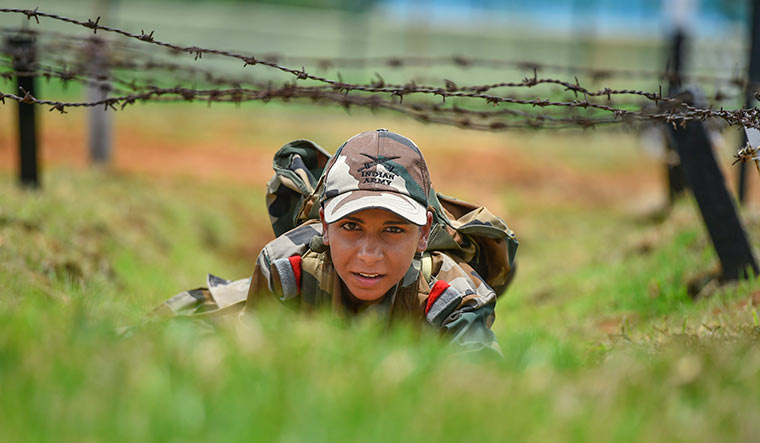 System failure: the army is downplaying the significance of the high failure rate of women cadets at ota | PTI

THE PASSING OUT parade at Officers Training Academy (OTA) Chennai in March was marred by an unusually high failure rate of women cadets. The number of women cadets failing the physical tests went up soon after the Supreme Court ruled in favour of permanent commission to female officers in the armed forces.

Since 1992, when women were allowed to serve in the military through Short Service Commission (SSC) at OTA, they have nearly always cleared their physical tests—except last year, when three cadets failed the mandatory tests. However, in the last OTA batch, at least 13 women failed the horizontal rope test, while three others could not complete their 5km running task. And, perhaps for the first time, two women are likely to be withdrawn from the academy, after failing to clear the training course in two terms. Every cadet gets a maximum of two chances to complete the training.

“It is an aberration and a matter of serious concern,” said Lieutenant General (retd) Bobby Mathew, who was commandant of OTA Chennai. “Normally, relegation is way below 10 per cent of a batch and that, too, mostly happens with gentlemen cadets. Women cadets usually fail on medical or disciplinary grounds.”

There are 1,550 women officers in the Indian Army. And the ratio of lady cadets admitted to those passing out is approximately 1:0.99, according to Army headquarters. Many serving and retired women officers are suspicious about the timing of the mass failure and fear that it may be linked to the Supreme Court’s landmark judgment on February 17 making women officers eligible for permanent commissions and command posts. After a long legal battle, women officers are now on par with male officers in matters of promotions, benefits and pensions.

Capt (retd) Shweta Misra, who served in the Army Ordnance Corps, said the Army was trying to change its standards after losing the legal battle. “After the verdict, we have seen statements from senior officers including Chief of Defence Staff General Bipin Rawat that standards of women officers would have to be brought on par with men if they wanted to be treated equally. It must have percolated down through official channels as seen from the results in the academy. It does an injustice to women officers,” said Misra.

An officer who was involved in training at OTA said the Army used to have a separate criteria for physical training of women cadets. “Up until two years ago, women cadets never used to fail on physical fitness grounds,” said the officer. “Generally, male instructors are lenient with women cadets.”

In response to THE WEEK’s query, the Army headquarters said there had always been variations in the numbers of men and women cadets being relegated on various grounds such as medical reasons, discipline, or not meeting academic or physical standards. “These are due to inherent variations in the physical fitness levels of the intake, different response of human bodies to stress and training environment, academic pursuits in an environment of higher stress.”

But retired officers do not agree. Maj (retd) Asha Shinde Alagappa, a fourth generation officer, said there was no difference in the training imparted to female officers. “At the academy, men and women are treated equally in everything, including their haircuts. All cadets pass physical fitness tests and people are relegated only on medical or disciplinary grounds.” She said the government was spending nearly one lakh rupee a month on a cadet and the relegations were a huge loss to the exchequer. “The Army is already short of officers and if we do such things, it is very unfortunate. I am sure the top hierarchy of the Army is behind this move,” said Alagappa.

At the academy, there is a marked difference in the physical standard requirements of men and women. For instance, while men need to complete a 2.4km-run in 10 minutes, women get 15 minutes. In the battle physical efficiency test, ‘excellent timing’ for men is 24 minutes and 40 seconds while for women it is 31 minutes and 30 seconds. “To clear the physical fitness test, women cadets get multiple chances, including mercy attempts. And the instructors are more lenient with women cadets,” said an officer involved in training.

The Army headquarters, meanwhile, clarified that no changes were made to the physical fitness criteria of women cadets. It said significantly lower physical standards were set for women because of the “employment differences” between men and women. The Army headquarters, however, noted that the outgoing batch at OTA Chennai had close to 50 women cadets, which it said was “unusual”. Downplaying the significance of the high failure rate, it said the situation was not alarming and that the failed cadets would be given adequate opportunities to prepare for and pass the applicable physical and academic benchmarks.

An officer, however, told THE WEEK that the unusual failure rates at OTA was indeed influenced by the Supreme Court verdict. “We also get affected by what is happening outside,” he said. “The Supreme Court verdict came barely a week before the mercy attempts at OTA. There was chest-thumping on television channels by women officers with an arrogance that they were no less competent than their male colleagues. They said they underwent similar training like us. It might have changed the mindsets of the instructors.”